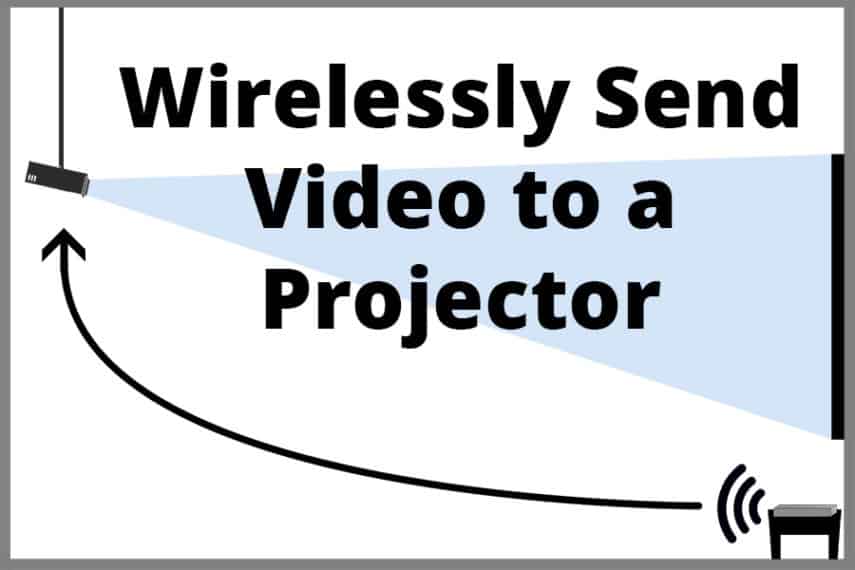 Moving to a projector setup can be one of the most satisfying changes you can make to your home theater system. There’s not much that competes with the sheer amount of screen-space and wow factor they bring to the table. But, there’s a pesky problem that plagues systems with projectors: how to get video to the unit wirelessly. Generally, this process involves the following steps:

First off, since every home theater setup is unique, there is no one-size-fits-all wireless video option. But by doing a little planning for the type of video content you’d like to use your projector for, you can be sure you’re making an informed decision. That’s why this process has to start with thinking a bit about the transmitter itself.

A wireless transmitter/receiver kit will let you stream your own content from anything that has an HDMI-Out port. You can reference our guides on how HDMI transmitters work and also reference our instructions on how to set them up, but the long and short of it is you plug the transmitter in on one end, and the receiver to the projector, and you have your content on the screen. The only complication is to make sure your transmitter matches the specs on your projector, whether it’s a simple unit like the Diamond Wireless HDMI Extender (on Amazon) which can handle 1080p or a higher-end option that can take 4k signals at 30hz like the IOGEAR Wireless 4K Extender Kit (on Amazon).

The easiest, bread-and-butter way to get some pretty good video content onto a pretty good projector (720p, for instance) is just to plug a streaming stick directly into the back of the projector. A Roku or Chromecast will handle everything easy, like Netflix, Hulu, most streaming services, etc. An Amazon Fire or Apple TV will also add value when it comes to content selection. But none of these options will work if you want to do some competitive gaming or stream content from a cable box, gaming system, etc.

There’s a final option here that is a little unorthodox. As mentioned above, you may want to actually mount your cable box at the projector–after all, they’re usually small enough that, with the proper planning, you can put them right on top of the projector (being careful not to block any air vents).

However, if you want the ultimate competitive gaming setup, you may need to actually run an HDMI cable to the gaming system, that way there is no lag in the signal. The wireless options that would otherwise carry this 4k signal at 60hz, like the J-Tech Digital HDbitT Series (on Amazon) are in a price range that is typically more than the gaming console themselves which, in a weird way, might make mounting you Xbox on the ceiling cost-effective. But in the end, the best solution for something like this is to use a long HDMI cable or an HDMI extender kit (our step by step article).

2. Connect the Wireless Receiver to the Projector

There are some cases, few and far between, that might require you to actually mount the video source on the ceiling with your projector if you want to go “wire-free”. If you’re doing any competitive gaming, for instance, the lag time added by a wireless transmitter running off a video game console will be intolerable. However, for the vast majority of people, the latency introduced by wireless transmitting is OK. If that’s where you’re at, then once you have the wireless transmitter picked out you can install it directly to the projector after it’s been mounted.

Simply connect the wireless receiver to the projector via a short HDMI cable and connect power to the receiver (if applicable).

If you’re using one of the wireless streaming-stick options, the setup is going to be easy here: you’ll need to plug the unit into the HDMI in port of the projector, and you’ll probably need to supply it power as well. Usually, this is done through USB, via a cord that, you guessed it, connects to the projector. If you’re mounting a cable box at your projector, though, you might have to investigate another power solution or consider putting the cable box somewhere else and transmitting the content from the cable box directly (though some quality limitations might apply, discussed above).

The streaming sticks bring a certain simplicity and elegance to the table, but they can’t substitute for supplying your own content, either from a gaming system, cable box, or computer, so for those purposes, you’ll have to use a wireless HDMI Transmitter kit. If this is the case, then applying the half of the wireless unit that will deliver content to the projector is your next step. This is not going to be much different than in the case of a streaming stick: the receiver will need to be hooked into an HDMI port and will need power, typically through USB (more on that below).

3. Connect the Transmitting Half of the Wireless Kit to the Video Source

Take the transmitting half of your kit and plug it into the HDMI out of your content source, be it the audio/video receiver, cable box, video game console, computer, etc. Then, make sure it has power. The power for the device might also be USB on this end, but more likely it’s going to be a brick that needs to be plugged into a standard power outlet. This is because compressing that HDMI signal and boosting it into the wireless spectrum is where the most processing power is involved.

This step won’t apply if you’re using a streaming stick since the “other half” of the transmission is coming from your WiFi network rather than a transmitter. But for a true wireless transmission kit, closing the loop will mean installing the transmitter at the content source. This is not too different than connecting the receiver to the projector.

Once you have the HDMI system plugged in on both ends, with power cables attached, you’re now ready to switch the whole thing on and see what happens. Turn on your projector and your video source and cut the lights.

A wireless HDMI kit is usually seamless when it comes to setup. Once the transmitter and receiver are both connected and have power, they typically automatically connect to each other and begin working. However, this is completely dependant upon the wireless HDMI kit you are using.

The exceptions are the streaming stick options, which will likely require at least a little setup in the way of connecting WiFi and logging in.

Now you’re ready to kick back and observe, making sure there are no problems with the quality of the streaming rate. If you notice flickers in the video or audio, or if the system blinks out every so often, consider that there are other wireless sources that might be competing with the signal such as wireless repeaters or video game controllers. Try powering some of these devices off to see if it improves the signal or not.

If you have any problems, the first thing you should do is confirm the wireless transmitter unit is working. There will be LEDs on both the wireless transmitter and receiver that show that they’re on and connected. If the transmitter system is working, then it may just need a couple of minutes to warm up and lock onto the signal. Even if this is the case, though, the receiving unit at the projector should still display some kind of message, even if it’s just “ready to receive.”

Next, if you still don’t see anything you should check that the correct input on the projector is selected, and the output on the streaming source is lined up properly. For instance, in the case of a computer, it might not automatically start sending video out of the correct HDMI port.

Although using a projector amplifies the experience of your home theater, it comes with its own unique challenges. One way or another, you’ll have to get content to the projector itself, and, unless you’re going to start tearing your wall up to run HDMI or Ethernet cables, that means you’re likely going to consider a wireless video solution.

The different options for going wireless here have their own pros and cons, which is why step 1 is always to pick the system that’s right for you. From there, connecting the wireless unit up on both ends should be simple, and using the system after it’s all installed will be a real treat. So, all things considered, step 1 is the most important. Take a look at our suggestions or do your own research!