Noise is hands down the biggest problem projector owners have with their equipment. Whether you’re watching a movie or giving a presentation, a noisy projector is an unwelcome disruption. Luckily a projector that’s too loud is something that can be remedied with some quick and easy fixes.

Projector noise is typically caused by the cooling fan coming on. There are numerous components within a projector that can heat up from use, and the higher the temperature, the harder the fan has to work and the louder your projector will be.

Whether it’s clearing more space for the projector, cleaning it, or changing how you use it, there are plenty of things you can do to reduce how noisy your projector is. In that case that what you’re hearing isn’t the cooling fan, things may be more serious, and we’ll discuss that too.

What Makes Noise in a Projector?

The most common source of noise in a projector is the fan (or fans) designed to keep the unit cool. Under normal use, multiple components of the projector produce heat, most obviously is the bulb or laser used to produce the light used for your display. However, other components requiring electrical and performing data processing also add heat.

The ventilation system in a projector consists of a few components. In addition to a fan or set of fans, a projector will usually have some sort of opening in the casing for exhaust. Under ideal conditions, fan power can blow air out or suck air in from these vents. Additionally, the fans will be triggered by internal thermometers.

Generally speaking, the hotter the temperature of the internal components, the harder the fans are programmed to work. When working properly, fans will make a gentle whirring sound, with no clicking or whining.

If you hear other sounds coming from your projector, such as grinding, crackling, or buzzing, you should return it or bring it to a licensed repair center. These symptoms may indicate an electrical or mechanical failure that could not only destroy your projector, but also cause a fire.

Reasons for a Noisy Projector

Because a projector throws its light to a distant surface, the light used to produce the image must be more powerful than the lights used in TVs. Further, since the screen itself cannot be directly manipulated as in some TVs, the projector must create the image before throwing it onto the screen.

This requires the processing power to create a finely detailed version of the image on a very small scale. This power going through the bulb and circuitry means that projectors get hotter than TVs after prolonged use.

This one seems obvious, but it extends beyond what most people associate with ventilation. When most people think of the ventilation system of a digital device, they think of internal fans and ventilation holes. While this is the ideal way for the device to offload heat, it is not the only way.

By pulling cool air in and pushing hot air out, internal fans help to cool internal components that generate heat. Blocking the ventilation holes interferes with this process, and will cause the fan to work harder to compensate.

Under ideal conditions, the only thing surrounding the projector is cool air. This allows for the projector to offload heat to the surrounding air, and for the air to carry heat away from the projector. This can’t happen as efficiently if the room is very hot, or if there are other pieces of equipment generating heat nearby.

One of the chief causes of heat in projectors, especially in a home theater environment, is using them for too long. So, turning the projector off every once and a while during a day-long binge session will ensure a longer life.

Most home projectors are great if you want to watch one movie, a few episodes, or a sports match, but truthfully, there’s no reason why you can’t use a projector all of the time (we explain why in our other article). But if you are planning to marathon the entire Star Wars franchise, every Simpsons episode, or all of the Thanksgiving day football games, you should probably choose a stationary projector and not a portable one.

If you want to go with the projector for longer-form viewing because you are hosting a large number of guests, you may want to consider renting a projector instead of using your own. This will allow you to preserve your equipment and also give you options you can rely on to last through the entire viewing experience.

Dirt and dust typically come from two sources: the oils and contaminants on our hands and debris like skin cells and fabric fibers floating in the air. While dirt from our hands typically impacts the outside of the projector unit, dust from airborne debris tends to accumulate on the inside.

While dirt buildup on the outside works to retain heat, dust can be more pernicious. In addition to increasing heat retention, dust can also jam fans and unused ports. In some cases it can also cause short circuits and fires.

Grinding, crackling, or buzzing may indicate a problem other than heat. These are usually early warning signs of a problem that requires a licensed technician. Examples might include a defective fan or a worn electrical connection.

How to Reduce Projector Noise

You can also look into using or building a hush box for your projector! 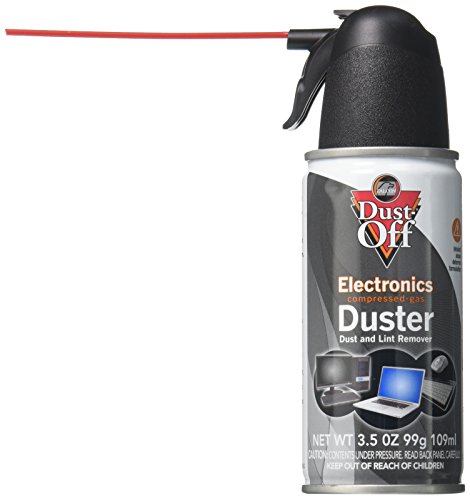 Keeping your projector clean is one of the best ways to ensure proper ventilation for it. The outside of your projector can be kept clean by spot cleaning with either surface cleaning wipes or rubbing alcohol on a paper towel or cotton ball. If you’re using rubbing alcohol, don’t use too much. The paper towel or cotton ball should be damp but not soaking wet.

The inside of a projector can usually be kept clean by regularly using a computer duster. If you’ve never seen these before, a computer duster is a can of compressed gas (usually carbon dioxide) with a straw attachment for the nozzle.

For a good representative example, have a look at the Falcon Dust Compressed Gas (on Amazon). Simply attach the straw and aim it inside the ventilation holes on your projector. It’s a good idea to wear eye and respiratory protection when doing this.

In some cases it may be a good idea to remove the casing of the projector to do a more thorough cleaning. You should check your projector’s documentation about whether you can do this yourself as this may void your warranty.

Nearby objects are another way projectors retain heat. Always place projectors on a firm, flat surface with plenty of clearance on all sides. Avoid surfaces that are cushioned or carpeted as they tend to retain heat. The best place to place a projector is on an unoccupied table, shelf, or hard floor.

The best way to maximize air circulation around your projector is to mount it to the wall or ceiling. Although ceiling mounts can be a pain to set up, wall mounts like the ST Universal Projector Mount (on Amazon) are relatively easy to use, and are typically no more difficult to install than a shelf.

For optimal results, place your wall mount high so fewer objects interfere with airflow. Whether with a wall or ceiling mount, ensure there is sufficient clearance above the projector for air to move as the heat rises. And we have another article discussing how to select a projector mount if this is something you’re considering.

In some instances, it may make sense to bring your projector to a licensed repair technician. If your projector is making any sound that isn’t the smooth operation of a plastic fan, it probably needs fixing. Additionally, if your projector heats up unusually quickly relative to when you first got it, it may be worth bringing it in for repairs.

Dealing with projector noise is something that usually doesn’t require much more than slight modifications to your home theater arrangement. Avoiding prolonged use, ensuring proper ventilation, and keeping the projector clean can help increase the longevity of your projector.

And once you’ve got that sound taken care of, maybe you’d like to consider going for a full tune-up and reading through our article on how to improve projector image quality.