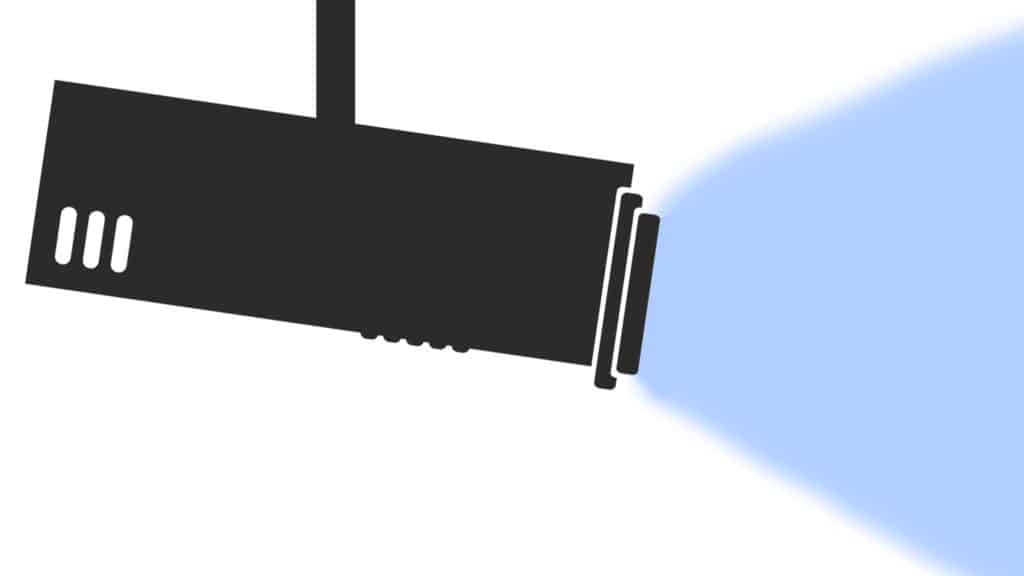 What is a Short Throw Projector? Throw Ratio Explained!

How does a Short Throw Projector work?

A short throw projector is able to produce such a large image while still being relatively close to the screen by using either 1) a high-quality lens or 2) a chipset that uses geometry correction to warp the image before it is projected through the lens. Both of these things attribute to the slight price increase from a normal throw projector. A high-quality lens is able to keep the image very clear, but this type of lens typically doesn't allow you to adjust or zoom at all. Some short throw projectors don't allow for any adjustment of the lens at all. In knowing this, you must be careful when mounting any short throw projector because the position should be very precise. Now, the geometry correction applied to the image is quite complicated. Some manufacturers have still yet to perfect this type of technology. Anyways, the chipset basically applies a real-time digital filter to the video signal being input to the projector. The filter or warped image is then output without any delay.

The main difference between a Short Throw and Normal Throw Projector.

Advantages of having a Short Throw Projector

If a projector is at the very back of the room, let's say 15 feet away from the screen, then you will likely be running a 20-foot long HDMI cable from the projector to your A/V receiver. You must also find a way to provide power to the projector. This is assuming that the receiver is placed under the screen in an entertainment center. Depending on how the cable actually runs, it may need to be even longer. Now, if the projector is 4 or even 5 feet away from the screen, then your cable lengths will be much shorter! You can even run the power cable with a small extension along with the shorter HDMI cable to the receiver. This will save a lot of time and headache when initially running the cables and also if either the HDMI or power cable stop working for some reason.

Positioning and the issue of Shadows.

Normal throw projectors that are positioned close the back of the room, have much more room to adjust for the screen placement. With a short throw projector, there is much less room for error and you will need to measure very precisely if you plan to mount. However, with a normal throw projector positioned near the back of a room, it is very likely that whenever someone walks in front of the seating area that a big ole' shadow will be cast upon the screen. This can get quite annoying over time. If you happen to be watching the big game, and you miss your team score the final goal, touchdown, etc. The last thing you want is some poor soul receiving a black eye after walking in front of the screen. Of course, this is an exaggeration but you get the point. Shadows are no fun.

Heat/Sound Disturbance from the Projector.

Some people may not know this, but projectors will get extremely hot after being in use for long periods of time. They really do create a considerable amount of heat. With a normal throw projector, it will likely be positioned closer to the sitting area ie. right above you, on the wall behind you, or sitting on something next to you. After being close to a projector for a little while you will definitely start to feel the heat of it. Also, most all projectors will have an internal fan(s) to help keep them cool. The fan(s) will usually spin faster and faster depending on how hot the projector gets. A lower end projector's fans can reach a considerable volume level and become a disturbance. Now, if the projector is positioned 8 or so feet in front of you, then you will be a lot less likely to feel the heat and hear the fan(s) of the projector. Plus, the front speakers will be directing audio towards you, so there's almost no chance you'll hear the fan(s) roaring in the middle of a movie. And if the projector is still producing a lot of noise, you can always build a hush/cooling box for it!

Calculating the Throw Ratio and Positioning for a Projector

How far should the projector be from the screen?

Now, if you are given a throw ratio range, then you will need to do the calculations for both the smallest and largest ratio. The projector can then be positioned within the calculated ranges and adjusted using the built-in lens/zoom.

You should then round these numbers by 5%. This is suggested by most manufacturers. Multiply the closest point by 1.05 and the furthest point by .95, this will give us a suggested range between 65.2in and 71in (5ft & 5.2in and 5ft & 11in). This means the projector should be mounted no closer than 65.2in and no further than 71in from the screen.

What size image can my projector produce?

In all, I believe short throw projectors can change numerous peoples minds about purchasing a projector. You don't need a super large room to house a projector and a screen, it can be done in almost any room in a home. If you are looking to put a projector and screen in your living room, then check out my article all about using a Projector in a Living Room. A short throw projector definitely has its advantages, but it is not the end all, best of all type of projector. If the room is capable of using a normal throw projector then go for it! For certain situations, a normal projector may actually work better. It is purely based upon the layout of the room and where you would like the projector to be placed. In the end, it's your choice!

If you are interested in learning more about home theaters and the technologies incorporated with them, check out this article How A Home Theater Works – The Ultimate Explanation for Anyone!