In the wide world of soundbars, it’s easy to get lost in all the specifications and acronyms. One feature you may notice in some higher-end soundbars is the advanced audio standard Dolby Atmos. But is this something you need? What does Dolby Atmos add anyways?

A Dolby Atmos soundbar adds the height dimension to audio. This means they will often offer 5.1.2 channels of sound, where the last two channels are the ones adding the height component.

How does this work? Most of these soundbars come with drivers that fire upwards so audio is heard all around a room. Now that there are also budget-friendly models there’s no reason not to upgrade your television’s audio capabilities to get the most out of your setup. But only if you think you’d really benefit from the higher quality sound.

Are Dolby Atmos Soundbars Worth It?

Dolby Atmos soundbars are priced higher than many of their competitors including soundbars like the Samsung HW-Q950T (our review). However, there is a good reason for this and makes it worth the cost. Dolby Atmos soundbars have upward-firing drivers. This means that they support height channels so you can experience true surround sound, better emulating a cinema-quality experience.

Atmos soundbars are available in all different styles, sizes, and channel configurations, so you can find one that fits your audio needs, style, and budget. The soundbar is also easy to install, no matter where you place it, and the options are almost limitless.

Another reason it’s worth the money is Atmos soundbars are compatible with most other audio and video components. This includes DVD players, Netflix, and other streaming services, along with gaming consoles.

And you can get an Atmos soundbar with the two extra Atmos channels but without all the other surround channels. And if you’re not quite following this discussion around “channels”, check out our guide on what soundbar channels are in the first place.

Over the last few years, Dolby Atmos soundbars have also become more budget-friendly. While there are still high-priced models that will deliver impressive, immersive sound, there are also some that still produce amazing audio at a more approachable price. And when you’re comparing surround sound to soundbars (our guide), you may be surprised at the sheer bang-for-your-buck that soundbars offer.

There is no shortage of Dolby Atmos soundbars to choose from. Some are priced for budget-minded consumers, while others are designed specifically for movies or music. If you are searching for an Atmos soundbar but aren’t sure what to compare. Here are three of the top-recommended models. 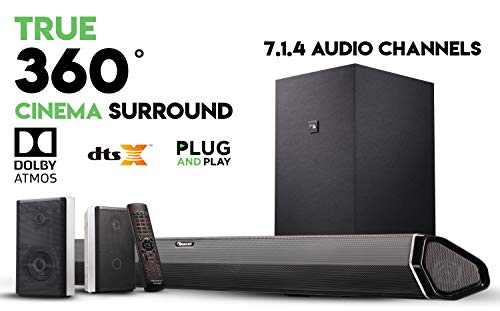 The Nakamichi Shockwafe pro’s name makes sense: it’s a shocking value if you’re trying to deploy a robust surround sound system. The Shockwafe Pro 7.1.4Ch (on Amazon) includes all the speakers you need to use advanced audio standards like Dolby Atmos and DTS:X, while minimizing the actual complexity by using the soundbar as the wireless base station for the speakers that aren’t directly connected.

We have a much more detailed review of the Shockwafe 7.1.4 if you’re interested. It goes into a lot of the other details on this unit, like the built-in room optimization and the dual satellite features, but rest assured that if you end up buying this option, it’s worth every penny. 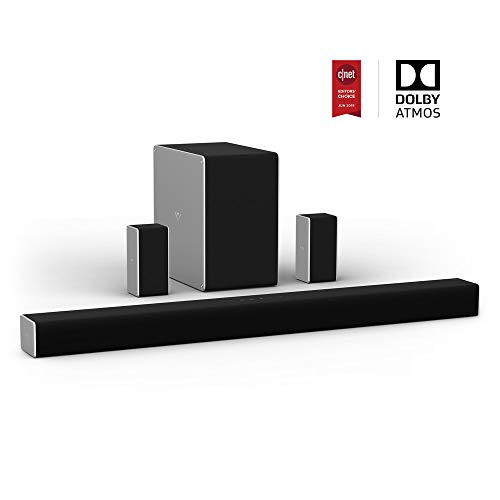 If the price is important but you don’t want to sacrifice audio quality, the Vizio SB36512-F6 is a great option. Its compact design allows it to easily integrate with your existing system without taking up a lot of space. It comes with dedicated rear speakers and a surprising number of inputs.

The rear speakers are what set this relatively inexpensive soundbar apart. They give a truly immersive audio experience, whether it’s movies, T.V., or music. The only downside is the lack of DTS:X. Audiophiles might also find that their music is not as crisp and clear as they wanted, but this soundbar’s ability to produce cinematic audio at an affordable price is hard to beat.

When it comes to appearance, the SB36512-F6 is compact with a sleek appearance. The black cloth wrap allows the soundbar to blend in wherever it’s placed and the silver-colored ends give it an edgy look.

You’ll find two upward-firing height speakers at the top of the bar. These are designed to bounce sound off the ceiling and down into the room. The limited controls on the speaker can be a plus or disadvantage, depending on your preferences. However, it does come with a handy remote for easy volume and other function control. 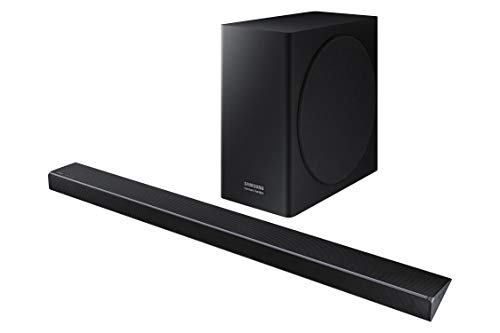 If you’re a movie buff and looking for an Atmos soundbar at a reasonable price, the Samsung HW-Q70R (on Amazon) is also a great option. It comes with a streamlined design that blends in perfectly with your other components, even if it’s just your smart T.V.

Even though this soundbar might not be the best choice for audiophiles, its wireless subwoofer delivers a punch. It supports DTS:X and other formats, though it does lack a voice assist function, along with Google Chromecast streaming capabilities. Even though it’s only a 3.1.2 channel setup, This Samsung soundbar is more than capable of producing immersive sound.

It’s priced a little higher than other models, but it does have a much heftier subwoofer. The overall surround sound quality is also better than some of its competitors. While it does have a sleek and slim design, you might find that the LED display is difficult to see due to the lattice grille.

Along with the wireless 8-inch wide and 16-inch square subwoofer, the soundbar also comes with a convenient remote. This helps to make up for the inability to see the display on top of the soundbar. You can also use Samsung’s “Smart Things” app on your phone to control everything from sound to inputs.

The Sony HT-ST5000 (on Amazon) is priced higher than some others, but it’s also worth it when you hear it’s incredible sound quality. It comes with Wi-Fi music and 4k HDR compatibility (our HDR tutorial), along with built-in Chromecast Audio. The main downside is this Sony soundbar does not come with DTS:X playback.

It produces a tight audio performance for both movies and music. Since it comes with Chromecast, Google Home, and Wi-Fi music, it’s easy to justify its higher price. It also doesn’t hurt that this soundbar has a unique appearance that helps it stand out from the rest.

Instead of the standard “black box”, this soundbar measures 46.5-inches wide and 3.25-inches in height. Five 2.6-inch drivers are in the front of the unit, with a coaxial soft dome tweeter handing above three of them. At the top, you’ll find two additional upward-firing drivers. To protect the sensitive tweeters, there is a grille across the top.

Like almost all soundbars, the Sony HT-ST5000 comes with a remote. It’s similar in appearance to standard Sony television remotes, only smaller. Bright colors make it easy to find the button for the function you need. Its compact size also makes the remote easy to store when it’s not in use.

What to Look For in a Dolby Atmos Soundbar

Not all Dolby Atmos soundbars are the same. This is why it’s helpful to know what to look for when you’re shopping for an Atmos soundbar. Here are a few aspects you’ll want to consider.

Dolby Atmos soundbars aren’t cheap but there are some quality models that are priced to fit most budgets. However, when you’re buying audio or video components there is the old saying “you get what you pay for”. Since the purpose of adding a soundbar is to improve audio quality, it’s not a good idea to buy the cheapest model you find.

You can find Dolby Atmos soundbars that are designed for movies, music, or both. This will be reflected in the price, especially if you want amazing surround sound for your movie nights and when you’re listening to music.

Most top-rated soundbars are designed for movie audio. Models designed to boost music often run a little higher in price. This is due to the tweeters and subwoofer that are often included in or with the soundbar, although, many of them don’t include subwoofers which some consumers prefer (our list of the top 11). You need these components if you want your music to have hard bass, along with crisp middle and upper ranges.

Soundbars don’t come with a lot of features but there are a few you want to look for. The first is the number of inputs. Some soundbars come with five or more giving you plenty of room to connect everything from your T.V. to gaming console, DVD player, and stereo.

Another feature to look for is a remote control. This might not seem important right now, but you will appreciate having it at home. Atmos soundbars are notoriously difficult to operate from the LED panel. Grilles often cover it for protection but this does make it almost impossible to see. A remote takes this problem away, while also allowing you to control the soundbar from almost any point in the room.

There’s no denying that the built-in speakers on your T.V. aren’t the best. It’s impossible to get the feeling that you’re watching the movie at the theater if you don’t have a Dolby Atmos soundbar. Even though Atmos soundbars aren’t exactly cheap, they’re worth the cost when you hear your favorite movies and music in surround sound.

You can find budget-friendly soundbars and you don’t have to sacrifice audio quality. Just make sure that the one you pick is designed for what you want to listen to.