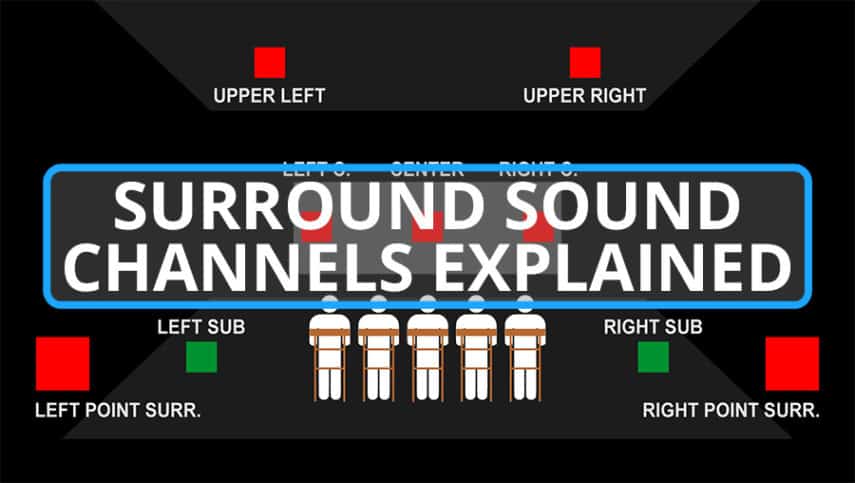 Let’s dive into the details of the different speaker systems and what their channel structure looks like. To quickly jump to whatever sound setup you’re looking for, click one of the links below.

What Do The Numbers in Speaker Channels Mean?

The first number of a speaker system configuration defines the number of main speakers in the setup. When it comes to the main speakers, we are referring to the front left, front right, center, and various surround speakers.

The second number of a speaker system configuration indicates the number of subwoofers in the surround sound setup. It is most common to see a 1, which means there is one subwoofer in the setup, but you may come across a 2 every now and then. While most surround sound systems work great with only one subwoofer, some people prefer the sound of two for their unique room and needs.

The third number of a speaker system configuration indicates the number of “height” or “upward-firing” speakers.

As if two numbers weren’t enough, you may come across numbers like 7.1.2 or 9.1.2 in your home theater product search. While these numbers seem to be pretty complex, it simply is giving room to define “height” speakers in a home theater surround sound system. Height speakers are usually located in the ceiling of the home theater room, but they may also be upward-firing speakers.

In a 2.0 stereo speaker system, you’re going to have two speakers beside your television – one to the left and one to the right. Your speakers will likely be powered by a good receiver or even an amplifier. In some cases, the speakers are active and do not require a separate power source. You will not have a subwoofer, and the speakers will be compatible with TV, DVD, and mobile devices, such as phones and laptops.

A 2.0 stereo system is a basic stereo setup with no surround sound and is typically used to listen to music. It is an affordable setup that may be a start to a home theater, and it helps keep things simple. It will give movies and TV a better sound than the tiny speakers that TVs come with, so there is nothing wrong with this simple setup.

The 2.0 stereo sound system will give your home theater a bit of a better sound, compared to the sole two-speaker setup. You’ll have your left and right speakers on each side of your television, and with the addition of one subwoofer, you’ll get added bass and depth to your home theater sound system.

Since there are no surrounding speakers, this setup is still a pretty basic setup, but adding the subwoofer will definitely enhance the sound to provide a more complex experience. You’ll hear lower frequencies better, and you’ll enjoy a clutter-free home theater, without tons of wires running everywhere.

Many soundbars are a 2.1-channel setup, and this setup is commonly used to enjoy movies, TV, and music.

A 3.1 sound system is a four-channel sound system that has three main speakers and a subwoofer. The speakers will consist of a left, a center, and a right speaker, positioned accordingly, and your subwoofer should be positioned on the floor in the center of the setup.

The addition of the center channel speaker is used to reproduce dialogue, while the left and right speakers will be used for effects, music, and other stereo sounds. A 3.1 system setup is still focused on only sound in the front and has no surround sound speakers. This is a great setup to enhance cinematic sound.

The 5.1 home theater system is a true surround sound system, and it is one of the most common home theater configurations. You’ll see it mentioned very frequently when browsing home theater products, and home theaters of all shapes and sizes rely on a 5.1 surround system for a great audio experience.

It has six channels, which include five main speakers and a subwoofer. There are three speakers located in the front: on the left, center, and right, as well as two surround sound speakers in the back of the room – one on the left and one on the right.

The 5.1 surround sound is the most commonly used format for delivering surround sound, and it is used in everything from DVD to movie theaters, digital TV, and beyond. Many laptops and desktop computers come with a 5.1 sound card, which is compatible with this setup.

The speaker location for the original six channels of a 5.1 surround system, but the two rear speakers should ideally be placed at a 135 to a 150-degree angle from the center channel/TV for an optimal surround sound experience.

When looking at the numbers, this configuration may seem complex, but the 7.1.2 surround system simply means a 7.1 surround sound setup with the addition of two ceiling or upward-firing speakers. This setup is mostly created with the help of Dolby Atmos in-ceiling speakers, and you can learn more about the Dolby Atmos 7.1.2 speaker configuration and setup here.

This surround system is best used on a flat ceiling made of drywall or plaster, and the height of the ceiling shouldn’t be more than 14 feet. This is a higher-end home theater experience.

Although this technology is becoming more commonly used in home theaters, it provides a top-of-the-line, realistic, and immersive home theater experience, creating a dome of sound in your home theater. As long as your receiver is Dolby Atmos compatible, you can achieve this configuration.

While some people are happy with just one subwoofer, others use the 7.2 set up to balance the bass in the home theater. Instead of having loud or soft bass in different parts of the room, the bass is evenly distributed, and no matter where you’re sitting, you’re getting the same bass experience.

If you love bass and want to invest in an additional subwoofer, the 7.2 home theater surround system would be a great choice for you. Be wary, your neighbors could get annoyed with too much bass.

The 9.1. home theater surround system is a ten-channel surround sound system that includes nine speakers and a subwoofer. In addition to the components included in the 7.1 home theater surround system, the 9.1 surround sound also includes two front height speakers. The front height speakers are placed in the front of the room, directly above the left and right main speakers. For the optimal sound, they should be about three feet above your left and right front speaker and face directly at the listener.

This is a very high-end home theater surround sound setup, and it is not as typical as 7.1, 5.1, or lower. This is used by highly dedicated home theater gurus, but it also may be achieved by slowly adding components to your home theater system.

It is best done with the help of a consultant or expert since there are many components and specs to be considered to set up this type of system properly.

A 9.1.2 home theater surround system has a slightly different setup than the 9.1 home theater system. While you may think that you’ll be simply adding two ceiling or upward-firing speakers to the 9.1 surround system configuration, you’re actually going to have two front wide speakers, instead of the two front height speakers – in addition to the two ceiling or upward-firing speakers.

Check out more about the Dolby Atmos 9.1.2 speaker placement. This setup also creates the immersive, high-end dome sound experience that the 7.1.2 had but adds an additional layer of sound with the left and right front wide speakers.

While you may think that the setups we reviewed are enough to satisfy any home theater, there are definitely more options available for home theaters, so if you haven’t found the perfect setup for you, don’t fret. Here are some more ways to configure your home theater speaker system.

The 4.1 home theater surround sound system is another widely used configuration, and it includes a front left, a front right, a rear left, and a rear right speaker with one subwoofer. It is a five-channel setup, which doesn’t include the typical center channel speaker.

13.1 Home Theater Surround Sound and Beyond

Dolby Digital Plus supports surround systems up to 13.1, and there are many other configurations for surround sound, like 12.2, 22.2, and more. While these surround sound setups are fascinating and complex, they are a rare find in a typical home theater. However, they are fun to research and learn about, and there’s nothing wrong with dreaming of the possibilities!

However, even a small room can benefit from speakers placed in the front, the sides, the back, and on the ceiling (unless it’s an exceptionally low ceiling), so typically, you’ll get a better sound with a larger amount of speakers optimally placed throughout the room, based on its size.

Surround sound channels aren’t all that confusing once you know what you’re looking at. I hope you found this article and the visual representations very useful! If you’re interested in purchasing home theater speakers, then check out our recommended speakers page. I spent countless hours researching and testing to find the best speakers out there for the best price!