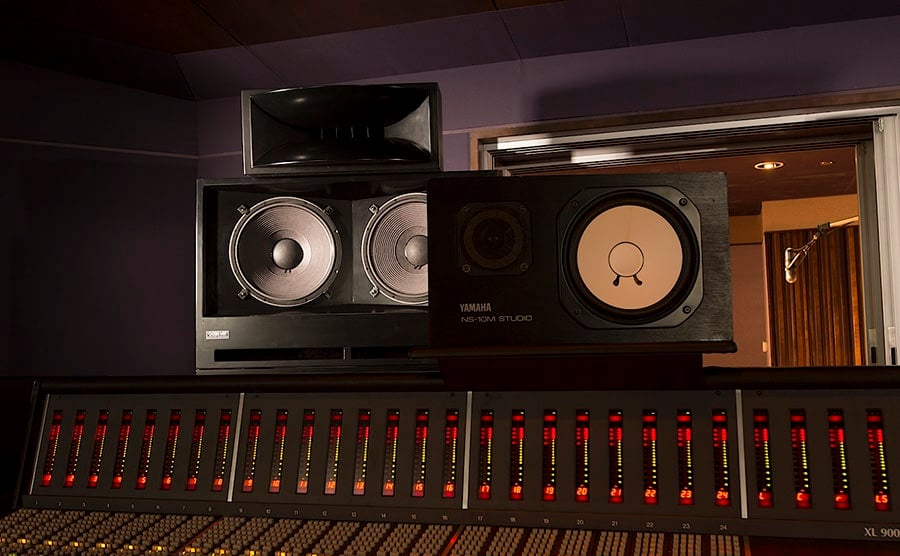 Can You Use Studio Monitors for a Home Theater?

Written by Jonah Matthes
As an Amazon Associate we earn from qualifying purchases made on our website. If you make a purchase through links from this website, we may get a small share of the sale from Amazon and other similar affiliate programs. You can read our complete legal information for more details.
Checkout Our Black Friday Deals!

Ask any serious audio enthusiast about listening to music and chances are they will have a listening setup that reaches far and beyond a conventional off-the-shelf home stereo system. For these people, the quality of playback is a hugely important factor in their enjoyment of what they listen to. They are likely using studio monitors and not standard stereo speakers.

However, despite the likelihood of large amounts of money being spent on audio separates in order to eke out as much enjoyment as possible from their particular music, the reality is the end product will be a highly polished work which will not necessarily match the ideals of the listener.

This is because while the listener will be consuming their audio either through headphones or home stereo speakers, the actual recording and production progress used by musicians and producers will see them using studio monitors rather than standard speakers during recording.

So, can you use studio monitors for home theater? Yes, and you may prefer it if quality and raw sound are more important to you than aesthetics. Because studio monitors are mostly used by those who work with audio or are artists, manufacturers focus on achieving rawer and clearer audio rather than making a speaker that looks good and can be more cheaply manufactured for the general public who don't require such a level of audio.

A studio monitor utilizes separate amplifiers for each frequency of tones, so the woofer, tweeter and the mid-range speaker each have a dedicated amplifier. As a result, each note and tone is delivered much more accurately and thus can be heard in greater clarity and detail as there is no compromise of power. This is the opposite with passive speakers. Passive speakers solely rely on the amplifier that has to work with all notes and tones across all ranges.

Studio monitors are also manufactured to a much tighter tolerance than is the case with home audio speakers, allowing for greater detail from the recorded sound so that any shortcomings in sound can be digitally corrected by the sound engineer. Any such background noise, imperfect note or other unwanted sounds can be detected and corrected which might have otherwise been missed when listening through home stereo speakers.

How Studio Monitors Sound and Why That's Important

The sound generated by studio monitors will be much rawer and closer to what was actually produced in-studio at the time of recording. So the tighter tolerances will aid in ensuring that the sound reproduction is as close to the original as possible and will allow much greater clarity of raw sound which can later be corrected and polished during the post-production process. Aesthetically, studio monitors are built much more in line with the purpose that they were intended and far less emphasis is placed on how they look in the real world.

To the trained ear, being able to hear the sound reproduced as close to as possible is much more important than any design feature of the monitor itself. This allows manufacturers to ensure that the budget is utilized on better quality components which are used in the construction of the sound reproduction elements of the studio monitor than the housing in which they are contained.

Like home speaker systems, not all studio monitors are made equal and some are designed to give greater sound dispersion than others. This means that some will sound better when close up; while others are designed to work better when the listener is at a distance.

How to Connect Studio Monitors to a Receiver

Methods for Connecting Studio Monitors to a Receiver

If you want to send the audio signals wirelessly, then check out this article on making regular speakers wireless!

How Home Speakers Are Manufactured

Most hi-fi manufacturers are likely to construct their speakers in a manner in which playback of a wide range of musical genres will largely mirror that of the studio post-production where any audio flaws in the recording process are professionally repaired or altered.

Most, if not all home stereo speakers utilize a passive design in that there is no built-in amplifier into the speaker unit. Instead, a dedicated amplifier is utilized to amplify the audio which then sends the signal and power to the speakers via wire.

Using a dedicated amplifier allows an enthusiast the ability to change and swap out speakers from one manufacturer and specification to another in order to try and achieve a more desirable listening experience. However, such set-ups can also limit the productivity of the speaker unit. This is due to the way in which the amplifier has to process and send the audio signals to the speaker. In most cases, a single amplifier will be responsible for powering and providing the audio signal to multiple speakers simultaniously.

Manufacturers are likely to be less exacting when it comes to production tolerances, which will have some impact on the audio reproduction that the consumer actually hears. Any recording flaws are less likely to be picked by the listener up due to these less stringent tolerances which may, in turn, mask any imperfections in the recorded sound and make them indistinguishable to the listening ear.

Aesthetically, home stereo speakers are designed to appeal to the eye more than the ear, and as a result, the performance of the speaker may be compromised by having been built with inferior components at the expense of better external materials in order to look the part.

While it may look the part, however, the sound reproduction can betray the appearance and as such does not always justify a sometimes-hefty price-tag which may, in fact, be commanded more by how the equipment looks rather than sounds.

To the untrained eye, studio monitors may look very similar to an off-the-shelf speaker found in a conventional home-audio system, but there is much more to a studio monitor than simply sound reproduction, and their use is much preferred by musicians and recording professionals during studio work.

So, with all that in mind, can studio mixers be used in a home theater setup? A simple answer would be yes, although aesthetically there could be some compromises that have to be made. However, the sound reproduction will be much more transparent, and listeners will certainly get their money's worth with regards to sound quality.

Stereo speakers, on the other hand, may not quite deliver the raw audio in the manner the recording artist might have intended, and the end product instead will be one that is more polished and with any recording imperfections already taken out or corrected. They may also be incapable of delivering the full audio experience in the manner it might have been intended. For example, bass tones may sound weaker due to power and reproduction limitations of the speaker due to the single amplifier which will also be processing other notes and tones at the same time.

If you choose to use studio monitors in a home theater or home entertainment system, then I highly recommend reading this article on mixing and matching speakers. There is some valuable information about how to properly mix and match speakers for a home theater system.

What about end-users who are likely to be solely interested in the end product?

For those users, using studio monitors could be considered overkill, and the listener may be content with a home stereo system which delivers what they are looking for. However, that isn't to say studio monitors can't or shouldn't be used in home theater or audio setups. Musicians, sound engineers, and producers use studio monitors as a tool to ensure their recorded works are as good as they can be, their use in a home theater can also prove beneficial to regular listeners, and can indeed enhance their auditory experience.

Do you need additional equipment when using studio monitors?

Because studio monitors are designed to reproduce and deliver a greater range of notes and tones, it means that the listener is more open to hearing a much more authentic sound by default without the need to utilize any additional equipment such as equalizers in order to boost particular notes, tones or frequencies.

As a result, they can often be better suited to reproducing sound from an array of sources with better effect than standard stereo speakers which may lack in particular areas to fully deliver the sound as it was intended. The trade-off, however, comes when considering the aesthetics of the studio monitor over a more conventional speaker, and personal preference can often dictate which will end up being used.

Audio enthusiasts may be able to look beyond the appearance of a studio monitor knowing the auditory rewards that await, but for others, it can be a price beyond paying, and they may be content with a slightly less rewarding listening experience in order to ensure their set-up is easy on the eye.