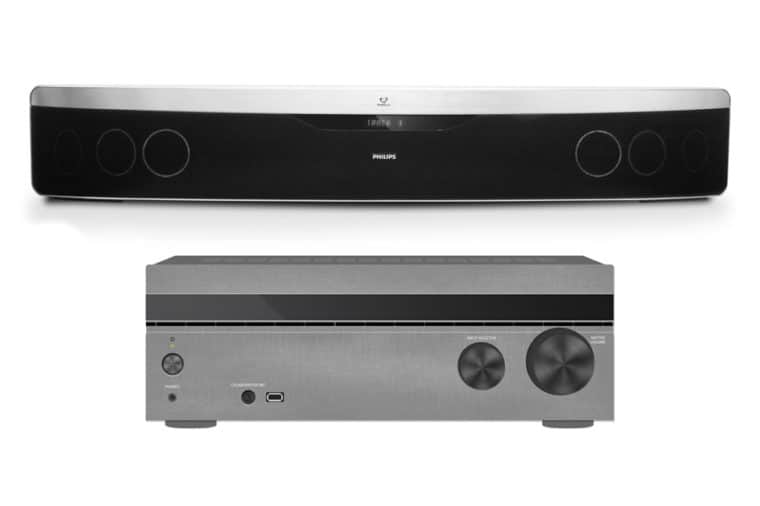 Soundbars are typically sold as an all-in-one unit, meaning it contains one or more amplifiers, drivers for multiple speakers, and processes the incoming signals on its own. This is an active soundbar. It is uncommon to connect an active soundbar to a receiver, but it is still possible!

So let’s dive a little deeper into soundbars. There are two main types. Active soundbars are the main type; they are extremely common and can range in price from being really cheap ($70) to way over the top expensive ($700).

Which soundbar can connect to a receiver?

Technically, both an active and passive soundbar can connect to a receiver. However, active soundbars are not meant to be used in this way. They are typically meant to be the all in one piece for your home entertainment system.

Passive soundbars are specifically built to integrate with an existing receiver or amplifier. The type of soundbar you use will typically depend on your specific situation. For example, if you already have an active soundbar and a receiver, think about your end goal.

Do you want to use your current equipment? Do you want to purchase a soundbar that is designed to work with a receiver? Or would you like to upgrade one day, but want to make due with what you have?

If your end goal is to use the equipment you already have, by all means, connect your current soundbar to a receiver. If not, then I will show you some alternatives.

Why would you want to connect a soundbar to a Receiver?

Most people want to connect a soundbar to a receiver to use it as the front 3 channels (left, center, right) then have separate surround speakers. However, I don’t really recommend this because active soundbars are not meant to be used this way. The front three channels will be merged and can severely hinder the audio quality.

Instead of connecting the soundbar to the receiver and using separate surround speakers, I suggest getting a soundbar that comes with wireless surround speakers. These systems are designed to be extremely easy to set up and are built to create an immersive surround sound experience.

My favorite soundbar with wireless surround sound speakers is the Nakamichi Shockwafe Pro 7.1.4Ch Soundbar System (on Amazon). For everything you get with this system, it’s actually priced very fairly! For a more name-brand system like this, it would cost you about double.

However, if you’re on a tight budget and want to use all of your current equipment to set this up, then continue reading!

Different scenarios for connecting an Active Soundbar to a Receiver

Connecting an active soundbar to a receiver is not a typical setup, but there are some scenarios that may warrant this decision.

Using the soundbar as your center channel speaker.

This is a perfectly understandable reason to connect your soundbar to a receiver, however, this is probably not the best idea. Here’s why. Your soundbar and other front speakers will likely be different brands, shapes, sizes, etc.

With the soundbar and other speakers being different sizes, the audio isn’t going to sound the same on all of them. Because of the characteristics of a soundbar, it will most likely sound very different from the other speakers connected to the receiver.

For example, you are watching a war movie with lots of explosions and gun-fire. If the camera pans from right to left or vice versa, the audio (if designed correctly) will also follow.

So as sound moves from the front right speaker to the soundbar (center speaker) then to the front left speaker, you will probably notice a difference in sound as it transitions between speakers.

Using the soundbar as the only speaker

There are actually a few ways you can use a soundbar as the main speaker with a receiver.

You may then need to adjust the receiver’s settings to point the audio in that direction. You should also note that the digital encoding standards should match on both the receiver and soundbar. If they don’t then you may run into some odd sound issues.

You can also use HDMI ARC (Audio Return Channel) to connect a soundbar to a receiver. This option can also have some issues, due to HDMI ARC not being 100% reliable and compatible with all components. But it is still a decent option if your receiver does not have a digital optical out connection.

To use HDMI ARC, simply connect an HDMI cable from the receiver’s HDMI ARC connection to the soundbar. Then connect the HDMI from the receiver to the television. All devices must support ARC capability in order for this solution to work properly. You may also need to configure the receiver and other devices to use ARC, they may not use it by default.

Dumb down your receiver to a glorified HDMI switcher. For this instance, you would connect the optical, aux, or even RCA cable(s) from the television itself to the soundbar. Keep all HDMI connections handled through the receiver, but you would basically disable all the audio functions of the receiver.

It will simply act as an HDMI switcher by the passing video and audio signals to the television. The sound would then be played through the soundbar. Note that this method could take a lot of setting adjusting on the receiver side. Not all receivers will allow you to disable its audio functions either, so hear my warning!

Connecting a Passive Soundbar to a Receiver

This is really simple. Depending on the passive soundbar you have, there may be multiple channels or it could be merged into a single channel. You quite simply, connect speaker wire from the receiver to the soundbar.

You could merge all of those channels into one if you really wanted to, but your receiver or amplifier must have ample power output to support that amount of power. In the end, it’s so simple to connect a passive soundbar to a receiver because that is what it was built to do!

I really wouldn’t suggest using a soundbar with a receiver unless you have purchased a passive soundbar. Otherwise, take the active soundbar you have and put it in another bedroom. It will better serve its purpose there. Almost any home theater or audio-video professional will suggest that you purchase surround speakers to use with your receiver.

One, it will sound 10 times better. Two, it’s a lot simpler to set up and use (minus the cable running). And three, surround speakers are not that expensive. You can find a very good 5.1 surround sound set for a reasonable price.

You will be much happier with that in the long run, I promise. If you would like to use a soundbar with your a/v receiver then I suggest purchasing a passive soundbar and not an active soundbar!

If you are interested in learning more about soundbars, check out my article on Soundbar Specs! It dives into the different specs outlined for soundbars and how they can be a little misleading.

It’s definitely an interesting read! Also, here is an article on the general workings of a Home Theater System! I would suggest reading this if you want to use the receiver to its full potential!