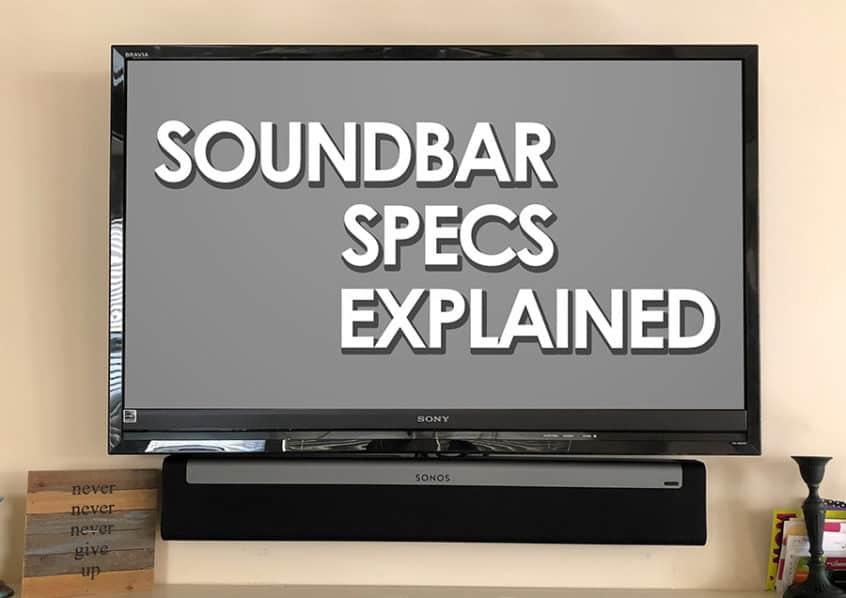 Wattage or Watts for soundbars or speakers is another marketing ploy by manufacturers to show that their product is louder and better than other products out there. The number of watts for speakers is usually irrelevant, you actually want to look at the sensitivity of the speakers. Unfortunately, the many “specs” indicated on soundbars are not clear or even accurate most of the time.

Did you really think manufacturers would all provide the correct soundbar specs using the same method and format? The easy answer is, well of course not! Manufacturers will always provide the highest specs they deem reasonable and believable. They do this all the time for soundbar wattage, speaker wattage, amplifier wattage, projector lumens, projector throw ratio, etc. The list goes on and on.

Don’t base any purchase purely based upon the specs provided! Check out all of our recommended soundbars to ease any worries about choosing a bad soundbar. Alright, now on to what you came here for.

What Do the Soundbar Specs Mean?

As mentioned above, wattage doesn’t really mean anything with respect to how the soundbar will sound. The total watts has no correlation with the quality of the speakers included.

But before you start searching through the different soundbar specs provided, you should probably understand what they actually mean first. There are many different specifications that are given for both soundbars and regular speakers, I will do my best to explain them in a simple manner.

Check out our article that’s specifically on traditional speaker specifications.

There are also passive soundbars that do not contain a built-in amplifier. A typical receiver or external amplifier will power this type of soundbar. You should note that passive soundbars tend to use high-quality speakers and will usually hold a premium price. However, they are quite uncommon.

Sensitivity defines how efficiently the speaker converts power/watts to volume/dB (decibels). The sensitivity spec is given out as dB. It may also be defined as the SPL (sound pressure level). The dB spec is found by giving the speaker an input power of 1 watt, then measuring the decibels produced from 1 meter away.

For instance, let’s say a speaker has a sensitivity rating of 85dB. While at a distance of 1 meter from the speaker and when 1 watt of power is applied, you should hear 85dB of volume. You should know that the increase of watts applied to the speaker does not equate to a linear increase in the dB produced. Basically every time the amount of watts is doubled, the volume will only increase by 3 dB.

Below is a dB sensitivity rating chart to better display the watt to dB conversion based on the sensitivity rating. This doesn’t really apply to soundbars because the specs given are usually very general, but it is important to know how some specs are measured.

Some soundbar manufacturers will provide a dB spec, but it is difficult to tell what it actually represents. They do not specify if this is the actual sensitivity rating or if it is how loud the soundbar can actually get using the built-in amplifier.

Some soundbars may claim to have “up to 90 dB of audio”, and most people will not understand what that means. Here is a handy chart that relates dB levels to commonly known and recognizable sounds.

The frequency range for a speaker is the difference between the lowest frequency and highest frequency the speaker is capable of producing. Frequency is basically the pitch of a sound and is measured in Hertz (Hz). Low frequency sounds around 20Hz – 200Hz is the low pitched sound that makes up the bass. The very low end of these frequencies are predominantly produced by the subwoofer.

Midrange frequencies are between 200Hz and 2000Hz. These ranges are mainly produced by woofers or midbass speakers. Higher frequency or higher pitch sounds can be anywhere from 2000Hz to 20000Hz (2kHz to 20kHz). Lastly, these ranges can be produced by tweeters.

Keep in mind that most speakers struggle to produce the lowest and highest range of their frequencies. Just like you may struggle to make a very deep or super high pitched sound with your voice, it is the same for speakers. The middle of their range is usually where they both operate and sound the best!

The main thing you should know is that soundbars notoriously do not have great low-frequency capabilities. Most soundbars do not contain a lot of depth. Therefore, they cannot provide enough room for a standard-sized subwoofer (usually 8″) to be included in the enclosure.

This is why almost all soundbars allow you to connect a separate subwoofer to it. It is crucial to the sound setup if you want to hear those deep bass booms while using your system.

Also, wireless subwoofers have become extremely prominent in modern units. Adding a subwoofer to the system would make the channels either 2.1 or 3.1, this would dramatically increase the low-frequency capabilities of the system.

Some systems utilize wireless “satellite” speakers and a wireless subwoofer. This would be a 5.1 surround sound system. You should definitely read more about the differences between 2.1 and 5.1 soundbars if you are interested in learning more about the better soundbars out there.

How Soundbar Specs Can Get Confusing

Here are some examples, just so you can compare different soundbars to the specifications provided:

It is a little mind-boggling that four different manufacturers will all provide different soundbar specs for each of their products. You would assume that they would all agree on a similar method of defining the capabilities so that consumers could accurately compare their products. But they don’t!

And by the way, out of the four examples provided, the definite winner is the Sonos Playbar (on Amazon). I have installed a few of them and they do sound absolutely incredible! But the issue is, how will the average consumer know that the Sonos Playbar is better? It’s much more expensive than the other soundbars, but it’s not clear to the individual that it is of a higher quality.

I actually emailed Sonos and specifically asked them, “why is there no specification for audio output for the Sonos Playbar?” Their exact response was “As it turns out, Sonos does not publish specs on the audio output of our speakers, because we feel they are not an accurate depiction of how the speakers can perform. We find that it’s best to try the speakers out for yourself in order to get a good feel for them.“

How do you feel about this response?

How Do You Know If a Soundbar is Good or Not?

I had to swallow some pride, and really think about soundbar specs. How are they portrayed to the average consumer? How many people can be misled by unstandardized information? And in my opinion, Sonos is actually right.

You cannot determine how a soundbar or speaker system will sound based purely on the soundbar specs. Like I said at the very beginning of this post, manufacturers are extremely deceptive. They will provide bogus specifications about their product, hoping consumers will see that their’s has the highest dB or output power, or whatever. And in reality, the given specs are not the best way to judge any piece of equipment.

You should actually look at the product reviews! There is a wonderful thing about customer reviews. People truly love to give their opinions on things, oh how people love to express their views. Whether it’s from a normal, everyday person or from a professional audio technician. A well-written review can literally speak a thousand words about the quality of a product. So, don’t underestimate them!