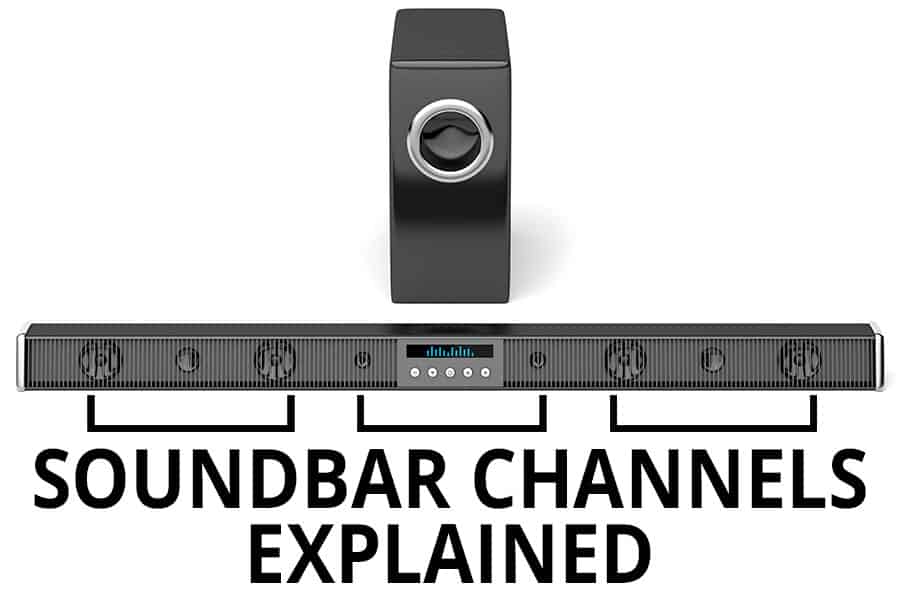 Setting up a home theater system comes with a lot of options and specifications to sort through. Deciding on the type of sound system to support your home theater goals is one of those first questions you will need to address.

For some, a full surround sound system does not make sense. It is bulkier, requires more items, and can cost a pretty penny. This is where the soundbar comes in. With their minimal and sleek designs, as well as continually improving technologies, the soundbar has become a hot item in the home theater market.

However, as with other electronics, soundbars come with a host of specifications you need to decipher to ensure you purchase the model that is best for you. One of the first questions I often get asked about soundbars is in regards to the multi-number channel specifications.

There are plenty of options when it comes to soundbar channels, which helps make this device one of the industry’s hottest items. From 2.0 channels to 9.2.4 channels, soundbars offer a range of capabilities that continue to make them popular choices for those designing home theaters.

Examples like this are just the tip of the soundbar iceberg, however. Below, I take a deeper dive into the explanation of the numerical channel sequence included in most soundbars.

Below is a YouTube video we made that explains everything you need to know about soundbar channels!

Specifications for soundbars often include between two and three numbers. (In fact, if a soundbar does not provide this numerical sequence, it is not even worth considering!)

These numbers essentially define the type of sound system your soundbar will support, including the number of built-in or supported speakers, subwoofers, and audio capabilities.

Surround sound systems often contain these same types of numbers in their specifications. However, you should note that there are differences between the meanings of these channel specifications when it comes to surround sound versus soundbar technologies.

The first number in the sequence refers to the number of channels your soundbar has. If the number is a “2”, this means your soundbar includes a left and right channel. If the first number is a “3”, however, this means the soundbar has a left, right, and center channel. Soundbars that include “5” channels will support either "mimicked" or actual surround sound speakers as well.

Sleek, condensed, and often easy to install, the soundbar offers many of the same benefits of a surround sound system with much less of a hassle. Convenient to install, set up, and control – soundbars are an all-in-one sound solution many home theater owners appreciate.

The second number indicates whether the soundbar comes with a subwoofer or not. This number is usually listed as either a “1” or isn't included at all. That means if you have a 5.1 channel soundbar, you will have five main speaker channels as well as one subwoofer channel.

Very few soundbars have a built-in subwoofer because the enclosures are typically too small to support it. Many others come with a wireless model that can be placed anywhere in the room. Your specific model will indicate which type of subwoofer is included with your purchase.

Some soundbars are capable of connecting two subwoofers to it, but these are quite rare!

A third number is not always included in the soundbar specifications. The third number dictates how many dedicated drivers fire upwards towards the ceiling. By doing this, soundwaves are bounced off the ceiling and reflected down to the audience to envelop them in sound fully.

Why does this matter? This number indicates whether your soundbar supports either Dolby Atmos surround sound formats or DTS:X.

You should note that this capability is most commonly included only on 5- or more channel soundbars. Smaller soundbars do not have the number of channels to support both forward-facing sound as well as upward reflective audio.

With hundreds of different manufacturers, there are plenty of options for those looking to invest in a soundbar for their home theater. The most common, however, range from 2.0 to 9.1.4 channel models. With that, let us take a more in-depth look at what these soundbar speakers mean to you.

As explained briefly above, a 2.0 channel soundbar will include the front left and right channels. It will not include a channel that supports a subwoofer, as indicated by the “0”.

A 2.0 soundbar is the most basic type of enclosure. It does not offer full surround sound options. However, the amplified sound coming from your 2.0 channel soundbar will likely exceed the audio quality from your television. This makes for an excellent investment for a small home theater or home entertainment center on a budget.

A 2.1 channel soundbar includes a front left and right channel, as well as a subwoofer. Subwoofers are ideal inclusions in any home theater set up. They help to increase the definition of low notes, making them smoother and deeper. Not only does this help with television and movie audio, but also when using your home theater system to play music.

Including the subwoofer in your soundbar set up will greatly enhance your audio. A 2.1 channel subwoofer is ideal for small home theaters, such as those in apartments. As with the 2.0 channel model, these soundbars may not be on par with the sound produced by versions with more speakers. However, they significantly exceed the capabilities of your television.

By adding a third, and center channel to your soundbar, the dialogue now has a dedicated channel. The center channel significantly improves the quality of dialogue in movies, TV shows, etc.

As indicated by the “1”, a single subwoofer is included with a 3.1 channel soundbar.

A 5.1 channel soundbar added surround sound capabilities instead of merely mimicking them. For some soundbars, this means two more speakers are built into the bar design. However, these speakers are heavily angled out, allowing sound to bounce off walls and back at the audience.

However, better models allow for the addition of two wireless or wired surround sound speakers to be connected to the soundbar and physically located wherever desired by you.

For many consumers, the 5.1 channel soundbar is the ideal product for a home theater system. A 5.1 soundbar gives you the traditional five-speaker channels used in a home theater set up, as well as the subwoofer channel for a fully rounded audio experience.

The 7.1.2 channel soundbar is another popular option for those looking to invest in a complete home theater system. The seven channels have become the new standard in soundbar technology.

As with the 5-channel soundbar, these additional four speakers may be built-into the enclosure. More commonly, two will be built-in, and the other additional channels will require the installation of separate speakers for full utilization.

As noted previously, the “1” indicates a subwoofer channel to help embellish those deep tones and further enhance your listening pleasure.

However, the last “2” is what makes this specification one of the best. A 7.1.2 channel soundbar includes two upward-firing drivers that help sound envelop the listener and flush out the full home theater effect.

9.1.2 Channel Soundbar System: Even More Depth to the Sound System

A 9-channel soundbar is similar to the seven-channel version. However, it includes the addition of two more surround sound channels.

All 9-channel soundbars will include at least a single subwoofer channel. However, some, like the award-winning Nakamichi Sockwafe Ultra 9.2.4 soundbar, include two.

A 9-channel soundbar is going to be a hefty investment. They are some of the most expensive soundbars on the market today. Soundbars of this size are most often used for large home theater setups. These spaces typically require more speakers to fully envelop the audience. Additionally, these soundbars are often some of the longest or widest models out there.

The last digit for these soundbars indicates the inclusion of two dedicated upward drivers that expose your audience to an authentic Dolby Atmos or DTS:X experience.

As stated previously, there are plenty of soundbar options available to home theater owners. However, one of the options most commonly confused with the soundbar is the sound base.

A soundbase if very similar to a soundbar in that it is an all-in-one surround sound solution. (In fact, you might consider it the next wave of soundbar technology.) However, soundbases are typically larger – most notably deeper and thicker.

Unlike a soundbar designed to be mounted on a wall, the soundbase is designed to sit under the television. Strong enough to carry the weight of modern televisions, the soundbase offers more robust speaker drivers and better built-in amplification due to its larger size.

There are few 4.1 and 4.2 channel soundbars available for purchase. Dual subwoofers may be a bit much for a smaller area. However, this is a personal choice and may be suited to your specific needs.

A 6.12 channel soundbar includes dual frontal speakers instead of the single central one, as with the 4.1 channel option. However, it also consists of the surround sound channels featured in the 5.1 channel soundbar.

Of course, when followed by the “1”, these soundbars will include a subwoofer channel as well.

Active vs. Passive – Does This Affect Channels?

One of the most common follow up questions I received after explaining channels is whether capabilities are limited to active or passive soundbars only. There seems to be a common misconception that only active soundbars can offer multiple channels, subwoofers, and Dolby Atmos sound support.

In fact, the only real difference is that a passive soundbar requires additional equipment, in the form of amplifiers or receivers, to operate. Aside from that, you can find the same features in both active and passive soundbar models.

Active soundbars do typically cost less than passive versions. Because of this, if you are looking to improve your audio beyond what your television offers, active soundbars may be the way to go. Passive models are typically reserved for the more custom home theater installations.

The all-in-one soundbar offers almost everything a traditional surround sound system does. However, there are certain limitations you need to consider. The 9-channel soundbar is about as big as it gets.

If you need or want more channels, you will need to look into investing in a traditional surround sound system instead. The same can be said for huge rooms. With up to 22-channel options available with surround sound, soundbars cannot compete with these extreme setups.

If you are looking to support Dolby Digital Plus or THX sound, soundbars have yet to breach into these technologies; a traditional surround sound system will be required.