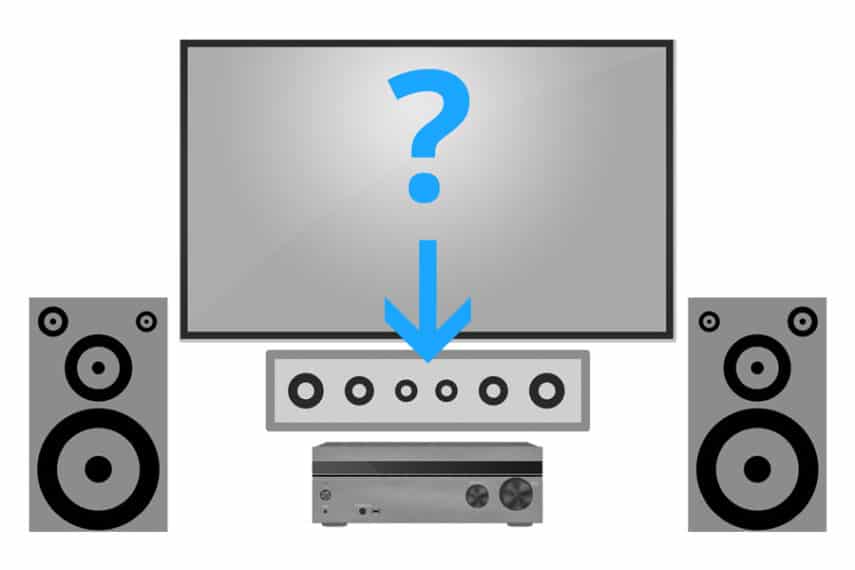 As tinkerers and audiophiles, we’re always trying to build the perfect home theater system. Whereas the left and right speaker channels typically handle sound effects and music, the center channel is where we get our dialogue. Given its size and positioning, a soundbar might seem like the perfect candidate to enhance that center channel to make the dialogue clearer.

Using a soundbar as a center can not only ruin your sound, it may also cause damage to your equipment. To understand why using a soundbar to substitute for the center channel is a bad idea, it is necessary to know how soundbars work.

There is a common misconception that soundbars are just another speaker. Its appearance and placement certainly suggest this. However, soundbars use a few audio tricks to not only amplify sound but to simulate the immersive experience of a surround sound system.

To accomplish this surround sound environment, the speakers that a soundbar uses are positioned in such a way as to make it unsuitable as a center speaker. Like your basic audio system, a soundbar has a left, right, and center channel.

To create the effect of surround sound, the left and right speakers are actually tilted towards the sides of the soundbar, using the walls in the room to create the theater quality sound we all love. The left and right channels literally bounce off the walls to make it seem like the sound is coming from your left and your right, rather than from the TV in front of you.

Why a Soundbar Won’t Sound Good as a Center Channel

Given that a soundbar has three channels (four if you decide to hook up a subwoofer), there are two ways to hook it up to your surround sound system. To use it as a true center, you would have to hook up all three channels of the soundbar to the center channel of your receiver. Alternatively, you can take advantage of the three channels and hook up a left, right, and center signal into the soundbar. Both of these approaches have significant disadvantages.

For the three-channel approach, the left and right speakers will be out of phase with the surround sound system, causing areas in the room where the sound is significantly quieter. This is because sound travels as waves, and when waves meet each other, they cause interference. This interference results in patches of space where there is sound cancellation and other patches where the sound is amplified.

Thus, in general, hooking up your soundbar to your surround sound system is not a good idea. If you hook your soundbar up as a single channel on all of its speakers, you will amplify the center channel to the left and right of your room, diminishing the surround sound experience. If you hook up your system to give the soundbar three channels, you risk causing sound interference, making your sound quiet in some areas of the room and loud in others. With either setup, you will be sacrificing sound quality with little reason.

Though this is not recommended, we have an article that explains exactly how to connect your soundbar as the center channel speaker. These instructions will vary depending on your receiver and soundbar.

Compounding the problem is the issue of signal strength. When the sound comes out of your TV, it emits what is known as a line level signal. This signal is very low voltage to save your television the power of emitting speaker level sound. If you were to hook up your line level signal directly into a speaker, it would only produce a faint buzzing sound, if any sound at all, because the wattage is not high enough to significantly move the speakers.

Most soundbars solve this by having an internal amplifier. An amplifier boosts the line level signal, by adding electricity to the signal, making it powerful enough to move your speakers and give you that beautiful theater-quality sound. This is why most soundbars have a power adapter or need to be plugged into a wall outlet.

A speaker that amplifies the sound internally is known as an active speaker and requires an external power source to function. This is in contrast to passive speakers which require external amplification like the ones in your surround sound system. Passive speakers are the most common type of speaker and are typically less expensive.

Like speakers, soundbars come in active and passive varieties. As previously stated, most soundbars are active soundbars, providing their own amplification. If you were to hook this kind of soundbar directly to a surround sound receiver, you would be first amplifying the line level signal with the receiver and then further amplifying the sound with the soundbar. To get around this, you can use a line out converter (on Amazon).

Needless to say, this is way more power than your soundbar is designed to handle and can result in permanent damage to the speakers. If you really want to make the mistake of hooking up your receiver to a soundbar, you need to make sure you are using a passive soundbar. Still, you will run into the sound quality problems of sound cancellation or sound dilution noted above. Just because you can hook up your soundbar to your center channel does not mean you should.

So What Is the Solution?

For all intents and purposes, integrating a soundbar into your surround sound system is a big, fat no. It ruins the sound, and with certain equipment, it can cause serious damage. So how do we give our center channel a boost without sacrificing our sound quality?

If you are looking to hook up a soundbar to your audio system because you have an extra one laying around, consider hooking it up to a different TV. It may make your sound louder than a standard center speaker, but it will be at the expense of ruining your sound quality overall, and you additionally risk damaging your equipment altogether.

However, if you are looking at a soundbar because you like its sleek appearance and its placement right under the TV, there are a variety of speakers that look just like a soundbar while being calibrated to provide a true center sound. Some examples of center speakers with this shape that we recommend are the Klipsch RP-440C and the Polk S35. Both of these speakers may cost more than your basic soundbar, but they will give your center channel the boost you are looking for without ruining your sound.