The Home Theater DIY > Soundbar > Can You Mount a Sound Bar Above the TV? 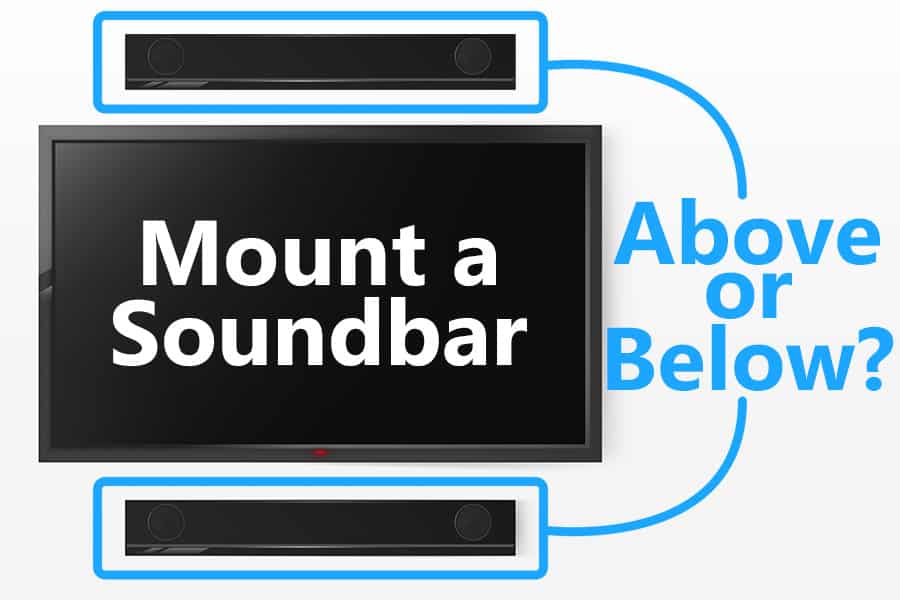 Can You Mount a Sound Bar Above the TV?

Most commonly soundbars are found below a television, either mounted on the wall (like what can be done to a TV - our guide) or on the entertainment system. What happens, however, when your setup would look better with a soundbar above the television? Does mounting it above harm the audio quality, especially with a high-quality soundbar with surround sound features? I did some deep research to figure out exactly how much the mounting location of a soundbar matters.

Can you mount a soundbar above the TV? In some situations, it can be a better option for audio quality. The most important factor in mounting a soundbar is that it is as close to ear level as possible, whether that is above or below the television.

The exceptions to this are soundbars with upward-firing elements and surround sound features, which have specific placement requirements depending on the model.

While the ear level rule encompasses most normal soundbars, the more advanced soundbars that require special placement can be harder to plan. Even with more basic soundbars, a compromise must be made as televisions are supposed to be placed at eye level, which is almost exactly the same height as ear level.

Further, in the article, I will help you navigate some of these tough decisions so you can decide what is right for your set-up.

Almost all soundbars are best mounted near ear level. Acoustics will almost always be better when pointed at the listener. There are of course exceptions to this rule when considering speakers that imitate surround sound or have upward-firing elements, but we will first focus on a normal setup.

To see various soundbars and exactly what we recommend, check out our complete soundbar buyer's guide! It will assist you with choosing the best soundbar for your particular setup.

Normal Soundbars with No Upward-Firing Speakers

Trying to balance television and soundbar placement usually requires compromise. While you do want this ear-level sound, you also want the television to be at about eye level to prevent neck strain.

Many people opt to put the television a bit above eye level, and the soundbar a bit below ear level. However, there are setups where the reverse makes more sense, like in a home theater where the chairs or floor slant upwards.

If this ends up being an issue with your soundbar model, this could be a situation where placement above the television could save you a lot of frustration and be more aesthetically pleasing.

When considering something like a Dolby Atmos soundbar, like this Samsung HW-Q950T (our review), there are quite a few elements that need to be considered in the design. Many of these soundbars rely on specific placements to work because they need reflective surfaces to imitate a surround sound setup.

It is important to find details on your specific soundbar so that you can find out the suggested placement, however, there are some basic rules you can use.

When a soundbar has upward-firing elements, it is important that these speakers are able to use the reflection of the ceiling to fully take advantage of the overhead sound. When this is the case, sometimes placing a soundbar below the television will inhibit the ability for the sound to reach up and bounce off the ceiling. Likewise, if the soundbar ends up too close to the ceiling it can keep the sound from properly reflecting.

For something like a Dolby Atmos virtual surround soundbar, placement needs to not only be considered but the layout of your theater itself. The Dolby Atmos setup guide suggests placing a Dolby Atmos bar below your television, and at about ear level. With that being said, you also have to avoid anything being placed between the soundbar and you.

Does a Soundbar Need to be Under a TV?

So, with some situations now laid out, does a soundbar need to be under a television? Most of the time, yes. It's often a better choice to place a soundbar under a TV rather than above it or behind it (as explained in our guide), but it depends entirely upon your home entertainment setup.

Something else to consider is wiring and setup. It can be a lot easier to wire to something underneath the television than above it. If the wiring is an issue, either way, you can always connect your soundbar to your television via Bluetooth.

While it depends on your television model, it is often the case that the connectors are closer to the bottom of the screen. Also, when placing a soundbar below a television, it is an option to just set it on the entertainment center rather than wall mounting. When putting a soundbar above the television, you will almost always have to wall-mount it.

Even with digital surround sound style soundbars, often it is recommended to have the unit underneath the television. With that being said, a few things need to be considered. Depending on placement, the television itself can end up blocking the upward-firing speakers when the soundbar is placed directly underneath it.

Also, some models bounce the sound off of the walls of your home theater to create that surround sound feel, and interior decoration or layout can block this sound.

Aesthetically, a lot of people prefer the soundbar below the television, including myself. Many soundbars are designed with a sleek under the television design, meaning putting the soundbar above could potentially throw off the weight visually of your setup.

With that being said, some soundbars won’t fit underneath a television without blocking the remote receiver when placed directly on the entertainment system.

If you are purchasing a soundbar, it is because you want an improved audio experience. Incorrect positioning of the unit can end up muffling the sound and negating the additional purchase entirely in some cases.

It isn’t uncommon to find someone complaining on a forum about the quality of their soundbar, only to have someone suggest a placement change that completely revolutionizes the original poster’s experience.

A common error is misplacing a soundbar with upward-facing speakers (but there are a few more we've written about as well). If rotated incorrectly, these can point sound in entirely the wrong direction, muffling it when it is absorbed by the carpet. It also can be true that when these soundbars are placed under a television, they attempt to reach up to the ceiling to reflect off, but end up never getting there due to vaulted ceilings.

Your home theater or entertainment setup is unique, and because of that, it falls into your hands to decide what is best for your individual set up. With a high-end surround soundbar, it is important to see what is suggested by the manufacturer or seller, as some of these have specific requirements. Even with that being said, the most common rule of thumb is to place the soundbar as close to ear level as possible.

If you are still unsure about where you want to put your soundbar after considering these suggestions, then try experimenting with the placement, including in an open-faced cabinet as we said in our guide! Have someone hold the soundbar while sitting in your desired place, and have them tilt the bar as well as move it around.

Every room will have unique acoustics due to the material the walls are made from, the number of windows, the flooring, the ceiling, etc. Due to the variations in different rooms, you may be entirely surprised as to what sounds better in your specific space!