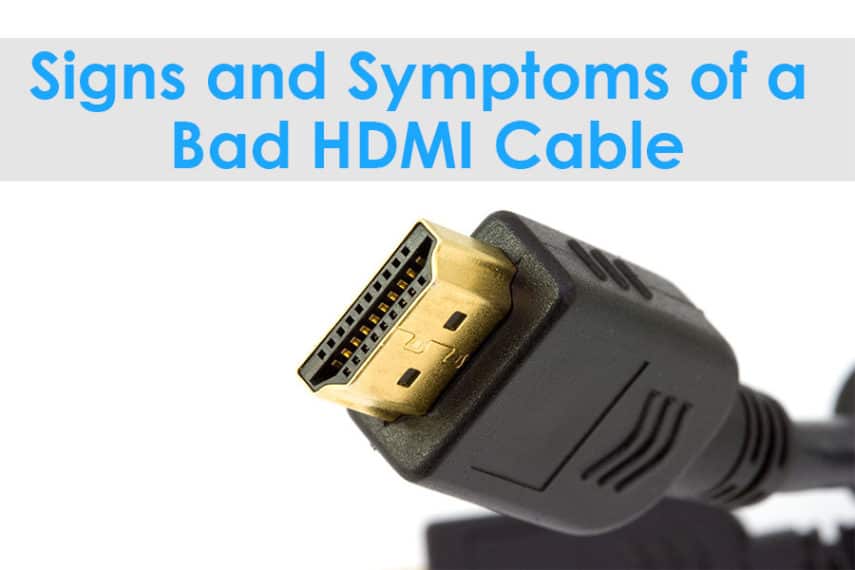 Do you remember sitting in front of an old black and white television, twisting antennas to try and capture a clear picture? Modern technology has come a long way. For those of us who jumped on the home theater bandwagon, HDMI technology itself has helped make it easy to connect multiple devices. The rich sound and beautiful images relayed through these cables make them the overlooked heroes of the home theater system. However, when an HDMI cable goes bad, it can bring your entire home theater system to a screeching, or blurry, halt.

So what are the most common signs, symptoms and fixes for a bad HDMI cable?

Because of how important your HDMI connection is to your home theater system, knowing which issues are most common as well as the solutions is essential. Not only can you save money on not buying a new cable with every issue, but it can help you quickly identify potential issues and quickly have your home theater back up and running.

The best way to avoid any of these issues is to use a high-quality HDMI cable. A lot of times, people think a cable is just a cable, however, using a low-quality HDMI cable can lead to issues in the future. Here’s a highly recommended HDMI cable from Amazon.

What Makes HDMI So Special?

High Definition Multimedia Interface, also known as HDMI, technology has streamlined connectivity in ways often underestimated. Introduced to electronic consumers in 2004, HDMI has continued to evolve to meet the needs of an ever-changing industry.

HDMI 2.0, the most current iteration available to consumers, supports 4K technology through 12-bit color and resolutions up to 60 frames per second. HDMI 2.1, however, will go beyond this. Announced in 2017, yet still years away from full production, HDMI 2.1 will help support the emergence of 10K technology and continue to expand on 4K and 8K capabilities.

But what does all of this mean to you? HDMI cables relay both audio and video signals between your connected devices. This means you no longer have to have separate cables for sound and pictures. HDMI also relays what is known as “handshake” information. In other words, HDMI cables relay copy protection data, component types, capabilities and restrictions between your connected devices. HDMI, and HDMI ARC (Audio Return Channel) in particular, also support Consumer Electronics Control (CEC) technology. This allows you to use one remote to control the basic functionality of up to 15 connected devices.

HDMI technology minimizes your home theater system’s footprint, streamlines your capabilities, and supports almost all platforms and devices. It is considered an asset to your entertainment system, if not your entire home theater set up. (If you would like to learn more about why HDMI is the best option for your home theater, check out my article on HDMI and HMDI ARC technologies.)

Testing For a Bad HDMI Cable

Before I talk about the most common issues with HDMI cables, I want to explain how you check for a bad HDMI cable in general.

First, you should check to see if your device works when connected through a different HDMI input port on your television, projector or receiver. Some output devices have multiple HDMI ports too, so you can always check those as well. If all devices work, you are on the right input, and the picture or sound still does not appear, you may have a bad HDMI cable. In this case, you will likely need to simply replace the HDMI cable.

Technology has grown more robust. HDMI technology, in particular, strives to provide flawlessly beautiful pictures and sounds. However, that does not mean issues and problems do not pop up. Knowing what may be related to a bad HDMI cable can help you easily identify a solution.

Some of the most common HDMI issues

In many cases, just checking to ensure your HDMI cable is entirely inserted into each connecting device can eliminate issues. If you note any frayed or exposed wires, your HDMI cable may have become damaged and will need to be replaced. Below, I talk in-depth about certain issues you may need to troubleshoot more to correct. However, you should always check your HDMI cable first to ensure it is fully connected to both devices. This will help to eliminate the majority of fixable issues associated with an HDMI cable.

The Issue: I mentioned the HDMI “handshake” above, but this feature can cause certain issues as well. High Bandwidth Digital Content Protection, or HDCP, helps to protect copyrighted material. (For 4K technology, this is referred HDCP 2.2.) HDCP, which was developed by Intel Corporation, attempts to prevent consumers from copying distributed media, such as movies, video games, and broadcasts. Blu-ray, for example, heavily relies on HDCP technology.

HDCP technology requires the use of HDMI cables in order to work. If your HDMI connection is not secure, or has become damaged, your home theater will suffer for it.

The Issue: HDR is short for High Dynamic Range. Going beyond 4K technology, HDR provides images that are subjected to a much broader color range. This provides viewers with much more detail as the expanded color potential offers them a larger scale with which to depict even the smallest nuances. Because this technology is newer, not all devices are capable of supporting it. There are a few things you can do if your HDR video fed is not coming through as clearly as you would expect.

The Issue: Digital Visual Interface (DVI) technology predates HDMI. However, many older televisions and devices that are still used today utilize DVI technology instead of HDMI. DVI only relays video signals; sound needs to be relayed through either RCA or 3.5mm audio cables instead. However, your HDMI device can still be connected to your DVI gadget through a conversion cable or a specially-made adapter. The primary issue here relates to older versus newer technology.

I want to connect my laptop to my home theater system, but the screen stays blank; what can I do? You should make sure your laptop (or desktop) have HDMI designated as your default output connection. If that does not fix the problem, you can attempt to troubleshoot it by:

What can I do for my Wireless HDMI issues? Wireless HDMI, also known as WHDI and/or WiHD (depending on the format), pretty new. They help further reduce the cables needed for your home theater and are great for those who have devices that are spaced far apart. However, they come with their own set of issues. If you have experienced issues with your wireless HDMI, try moving it around to help prevent interference often caused by line-of-sight and distance. If moving the devices around does not help, you will likely need to call tech support for your particular device.