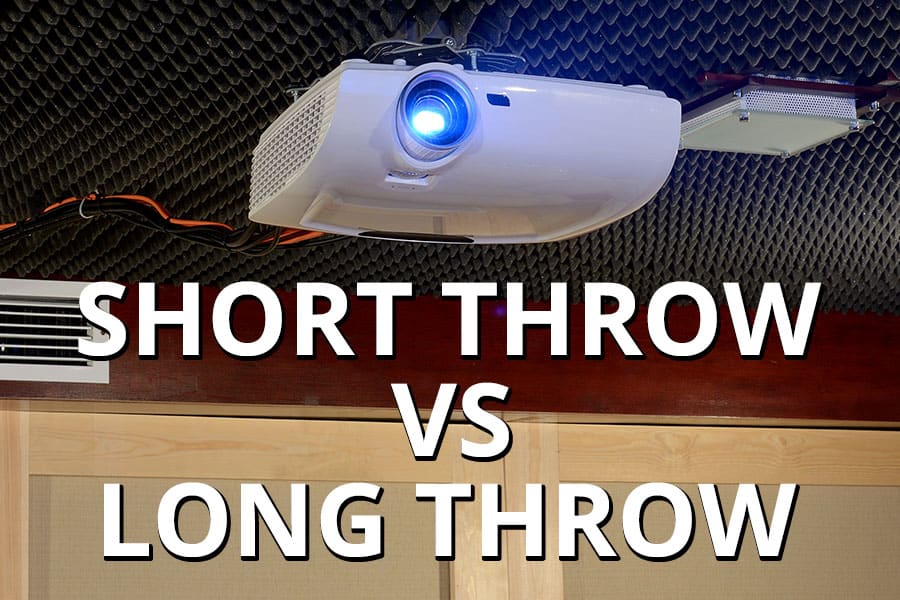 Short throw or long throw, buying a projector for your home theater system can be among the most confusing decisions you have to make. Choosing between brightness, zoom range, contrast ratio, resolution, and other specs makes deciding on a projector very difficult.

As with most home theater products, the appropriate one for you depends on several variables. Space, portability, and screen size will all impact which projector is right for you. Ultimately, the decision will depend on your needs, and one set-up cannot be said to be universally better.

What’s the Difference Between Short Throw and Long Throw Projectors?

Because short throw projectors are intended to be closer to the screen they project onto, they have a chip that modifies the geometry of the image they project so the angled projection appears as a normal rectangle on the projection surface. This extra processing causes short throw projectors to generate excess heat relative to their long throw cousins.

Long throw projectors are at peak performance long distances away from the screen they are projecting onto. This can be an advantage if you have a large home theater environment or if the power source is a distance from where you want your projection surface to be.

A short throw projector has a throw ratio between 0.4 and 1. This means that for every foot from the projection surface the projector is set back, the width of the projected image will increase by somewhere between 1 to 2.5 feet. (To calculate this scaling factor, divide one by the throw ratio.)

Because they can project from such short distances, short throw projectors can be ideal for projecting from behind a screen, lessening the likelihood that the projector gets bumped by someone walking by.

Because of the extra processing power required to convert rectangular images into trapezoids capable of projecting a rectangle at an angle, short throw projectors can get hot. When this happens, internal fans activate to cool the unit down, causing unwanted noise.

Additionally, because the projector warps the image to be projected at a certain angle, projecting on an uneven surface will cause more image warping than one might get from a long throw projector.

Long throw projectors have a throw ratio greater than one and will therefore always project an image with a width that is smaller than the distance of the projector from it. This has several advantages over short throw projectors, but a fair share of disadvantages as well.

As the name implies, long throw projectors can project images over longer distances, making them an excellent choice when the screen isn’t where the power source is. They can also be a good resource if your room’s foot traffic is closer to the screen.

Because the long throw projector doesn’t need to geometrically transform the image the way short throw projectors do, they are usually more moderately priced, given similar other specs.

Which Is Better for You?

Deciding what kind of projector is right for you depends on numerous factors. Three important considerations you should make are the home theater space, the placement of the projector, and the intended screen size.

Characteristics of the space including power sources and room curvature will impact which kind of projector is appropriate for your home theater system. Whether you intend to mount the projector or place it on the floor will also factor into your decision. Short throw and long throw projectors behave differently at different screen sizes.

Choosing the right projector is about balancing your preferences, something that will come down to your personal taste. There is no perfect way to set up a home theater; there’s just the perfect way for you.

A primary consideration when setting up anything in a home theater is the space it is being set up in. Curvatures in the room could help dictate good locations for your projection surface and the location of your projector. Power sources as well will impact what kind of projector you should go with.

A screen should sit about three feet from the floor to ensure comfortable viewing. Simply subtract three feet from your room’s ceiling height and you get the maximum height your screen can be. Choose the lower of these two numbers for the maximum height. The closest part of your viewing area should not be less than two screen heights away. To get the width, multiply the screen height by the aspect ratio your projector will project.

Although mounting your projector ensures that your image will be projected correctly every time, not mounting the projector gives you the option to make your projector mobile. This is great for projecting a movie on the side of the house on those warm summer nights.

Finding the Right Projector for You

Ultimately, the projector you choose will be determined by the factors that are important to you. Whether you want a particular screen size or you want your viewing area to be in a particular part of the room, there is a projector that can help you get the job done.

As long as your projector gives you the theater-quality experience you are looking for, you can’t go wrong with any projector. Figure out your priorities, and you will find the perfect projector for you.