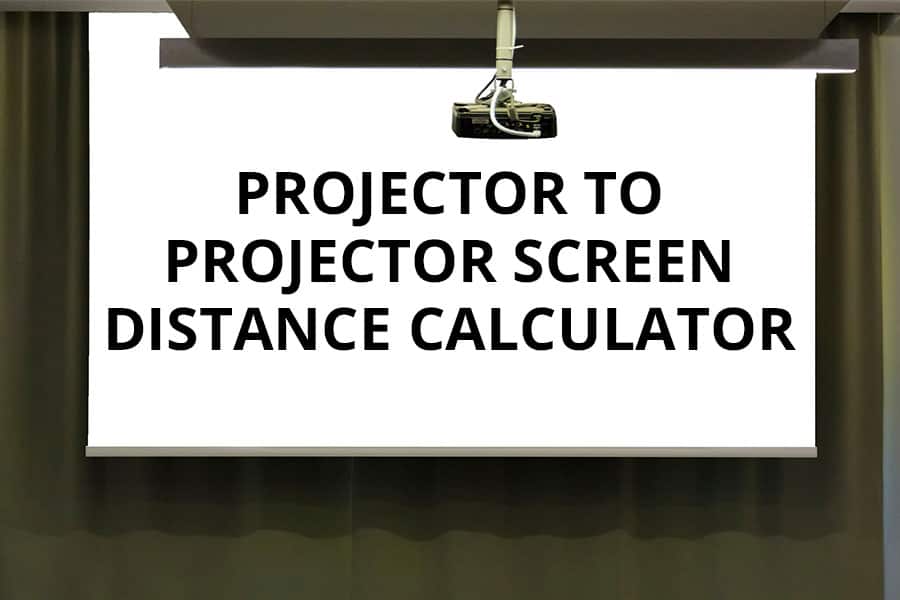 Click or tap to go straight to the calculator.

Buying a projector may seem overly complicated when compared to walking in and purchasing a television. However, projectors have several benefits that make them ideal when it comes to your home theater. However, understanding what specifications are important to you, as well as deciphering what they mean, can be slightly overwhelming at first. I want to focus on one of the most important specifications when it comes to investing in the right home theater projector for you: the throw ratio.

So what is projector throw ratio and how is it calculated? Throw ratio refers to the distance between your projector’s lens and the screen. Typically listed as a ratio, this number can tell you how far you need to place your projector from the intended screen.

This may sound complicated. In reality, the throw ratio is relatively easy to determine. Below, I deep dive into why the throw ratio matters to you and how you can easily use this spec to find the right home theater projector for you.

How is Throw Ratio Calculated?

Throw ratio measures the distance between your home theater projector and the intended screen. Determining your throw ratio is not overly complicated. In fact, it boils down to one simple formula.

In other words, to determine your throw ratio, you simply divide the distance between your screen and where you want to place your projector by the width of the screen itself.

To keep it simple, it is best to keep your units of measurement the same. In other words, if you are measuring in feet, keep both the distance and width measurements in feet. Do not have one unit measured in feet and another in inches. Use either, not both.

How to Find the Correct Projector Distance From the Screen

Perhaps you bought your projector without realizing how important that throw ratio is. It happens. However, in order to optimize your display, you now need to determine the correct distance for your projector placement. To do this, you would multiply the throw ratio by the width of the intended screen.

Distance from Projector to Screen Calculator

This can help ensure you properly place your home theater projector at an adequate and appropriate distance from your screen without wasting time moving it around.

You should note that most manufacturers do include the throw ratio in their specifications. It is typically displayed as a ratio, such as 1.25:1. When it comes to determining distance, you want to use the first number.  In the 1.25:1 example, this means you would use the 1.25 in the above equation to determine your distance.

Additionally, some projectors will include a range of throw ratios in their specifications. For example, your model may state it has a throw ratio of 0.69 to 0.83. To find the optimal distance range, simply plug these minimums and maximums into the equation and compare the answers. The products will give you the minimum and maximum distances where you can place your projector.

What about Screen Size?

Perhaps you bought your projector and installed it, intending to project directly onto your wall. While this may work for some people, you may decide you want to purchase a screen for your projected image to be displayed on. Finding the optimal screen size is just as easy as discovering throw ratio and distance.

After measuring the distance between the screen location and your projector, divide that by the throw ratio. This will provide you with the optimal width of the screen you should purchase.

Simple Examples For Calculating or Using the Throw Ratio

I do not know about you, but when it comes to math, I appreciate a few examples. Even when the equation is as simple as the one above. With that said, let’s run through several examples of how to calculate throw ratio, distance and screen size based on the equations provided above. Keep in mind, that projector screen sizes are typically measured diagonally. Yes, I know, this can make things slightly more confusing.

I stated that throw ratio is one of the most important specs for you to look into. Why? Because this spec will give you the optimal projector, distance and screen size for your intended home theater set up. Those are three of the most important measurements when it comes to a home theater projector. (Other specifications you may want to consider can be found in my Ultimate Projector Buyer’s Guide.)

When it comes to optimal projections, the placement of your projector is essential. It ensures you invest in the appropriate projector for your room. By understanding the throw ratio, you can get the crisp, clear picture you expect without wasting time moving your projector all over the place looking for that “perfect” placement or continually having to readjust your projected screen size. Without this ratio, image distortion is highly likely.

We have an extremely detailed article going over the key differences between long throw and short throw projectors. If you want a more simple explanation, then continue reading.

While there are several projectors I highly recommend, understanding the types of projectors based on throw ratio is just as important as reading a 5-star review of a product.

Your room size is a large factor when it comes to purchasing the right home theater projector for you. It affects the screen size, as well as the type of projector you need.

Projector types, based on throw ratio, are based on the distance the model must be from the screen to project a clear 100-inch image.

Normal and long throw projectors are ideal for medium to large spaces, including household dens, movie theaters, and outdoor projections.