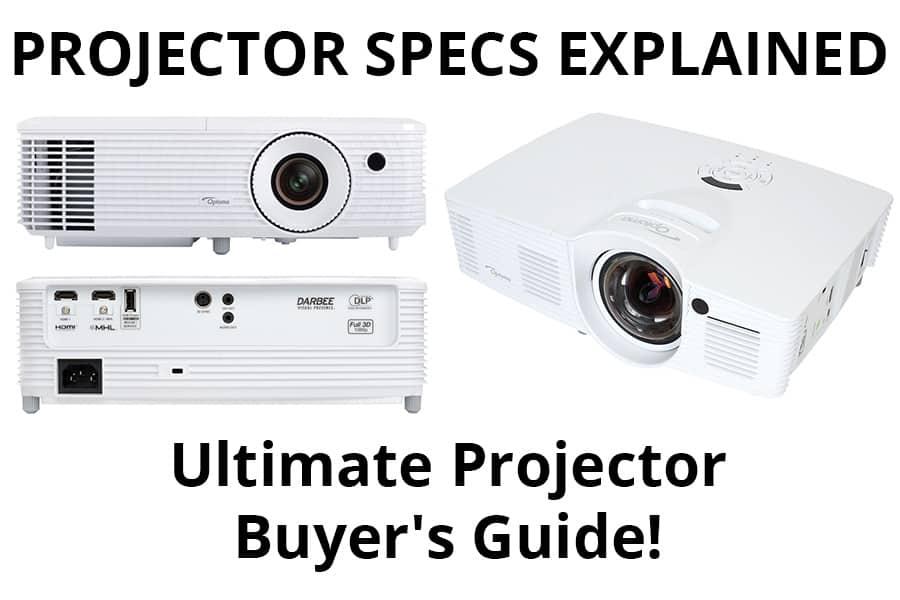 Like many Americans, my family and I spend a lot of time in our family room. Watching movies together, laughing through sitcoms, and spending time Netflix means the majority of our home life is spent in front of the television. Because of this, I started researching various home theater options to boost our viewing pleasure. That is when I discovered the home projector and all of the different specs involved with them!

What specs are important for a projector? There are four types of home projectors. Each have their own advantages and disadvantages. Aside from type, you also need to consider:

Just knowing which specs to look for is one thing. Knowing what they mean to you, however, is entirely different. Below, I explain what these important specs mean to your home theater so you can decide what the best projector for your needs may be, whether for gaming or taking it outside one afternoon (our guide). Additionally, check out my article about the best home theater projectors on the market today.

Projector Specs You Need To Know About

Before I talk about the various specs, you may be wondering what value a projector has for your home theater. This is especially true given the advances of the modern television.

A home projector is often an investment that replaces your television set. If you are looking at large screen televisions, a projector and screen combination will actually cost you less. It also is the undisputed champion if you are looking for a truly cinematic experience from the comfort of your couch.

Above, I mentioned that there are four main types of home projectors. (Note: Laser projectors are not included because they are still rare and very expensive to consumers).

Projector brightness is measured in ANSI lumens. In general, home projectors will start at 1000 ANSI lumens; some models may even exceed 3000 ANSI lumens. The more lumens your projector has, the brighter the image it produces will be.

In order to pick the projector with the best lumens for you, you need to evaluate the room you plan to use it in. In other words, the environment you intend to project in affects how many lumens you need. To determine this, you need to think about the level of ambient light within your projection space.

Ambient light refers to the amount of natural light in a room. The more ambient light you have, the higher the number of lumens your projector will need for a clear, crisp picture. If you have a designated home theater room, for example, it is likely that you will limit or even completely eliminate the level of ambient light entering the area. This type of room means you could go as low as 1000 ANSI lumens. It is important to note that it is possible for a projector to have too little ANSI lumens, however, having more than required will not hurt. Often, rooms have mixed levels of ambient light throughout the day and night. In this situation, it would be best to base your ANSI lumens on the brightest parts of the day.

Resolution is most commonly listed as pixels. For most projectors, you will see this listed either as 1080p or 4K. (If a projector lists anything aside from these pixels, I highly recommend you do not even consider purchasing it.)

The 1080p spec means your project has the ability to project up to 1920 x 1080 pixels. For those who remember 1080i, 1080p offers better quality images. This is because the “p” stands for “progressive scan”. As such, the 1080p is considered synonymous with high-definition (HD) video mode  and has become the industry standard for projectors and televisions alike.

On the other hand, 4K devices have been attracting more attention as the technology continues to advance. A 4K projector is capable of clearly projecting images up to 3840 x 2160 pixels. This level of resolution is considered Ultra High Definition (UHD) and is best for truly large screens. (A word of caution on 4K projectors, however. Manufacturers may claim their projectors are 4K when in fact they are actually just upscale versions of a 1080p. It is extremely important to always check out user reviews for any electronic you are looking to buy!)

Projector manufacturers often boast about high contract ratios. However, this does not necessarily mean these numbers accurately reflect the quality of the image. That is because contrast ratio does not provide a value for all the shades between black and white. That is where ANSI Contrast comes in. ANSI Contrast determines the ration through a 16-block checkerboard pattern, instead of simply black and white. This gives a more accurate contrast ratio value.

A projector should have a contrast ratio of 1000:1 at a minimum. (This means that the purest white is 1000 times brighter than the deepest black.) Additional features, such as BrilliantColor and sRGB, allow you to better control and perfect the color processing for your projector.

The inputs on your projector may vary. High-Definition Multimedia Interface (HDMI) and Digital Visual Interface (DVI) inputs have become the industry standard on all modern home projectors. However, other options may also be included.

If you are planning to use a receiver, the number of available inputs may not be as important. However, if you are not planning to use a receiver, this spec becomes more important. Potential inputs include component video, Universal Serial Bus (USB), Video Graphics Array (VGA) and Secure Digital (SD) card slots. Wi-Fi connections have also become popular features for smart projectors.

Having the right number of inputs is also important. For example, Blu-ray players, gaming consoles, and Amazon Fire TV Stick all use HDMI connections. Unless you want to connect and disconnect devices as needed, you would need at least three HDMI inputs available for use at a single time.

Modern technology makes projection easier than ever. The zoom and lens ratios allow you to determine the range of screen sizes your projector works best with, as well as the distance you need between the devices, for optimal picture clarity (more on projector types and how they work in our tutorial). A lens shift also helps you position the projected image into the ideal position for your screen.

For those who like to project on different screens, a zoom function allows you to adapt and modify your image to fit a range of screen sizes without having to move the projector. While digital projection can occasionally be found, optical zoom is ideal for projectors. A motorized zoom feature means you can control the zoom from a remote control. Manual, on the other hand, means you will need to adjust if yourself. Zoom ratios indicate the maximum zoom potential of your projector. For example, a zoom of 2.0x means the image can be doubled in size when at maximum zoom.

Lens shift allows you to move the lens itself up and down (vertical shift) or side to side (horizontal shift). This allows you to place your projector in an ideal location, moving the lens to perfect the angle and direction of your projection.

Nothing is more aggravating than a loud noise interrupting those quiet moments of your favorite show or movie. Because of this, it is important to consider the noise level of any projector you are looking to buy. Projector noises levels are measured in decibels (db).

Projectors utilize fans to help keep the devices cool while being used. The higher the value, the louder the projector. On average, 30db is considered an acceptable level of noise for most users. However, a few have successfully reduced their noise to 19 to 25db.

Fans are not the only noises produced by a projector. Single-chip DLP projectors, for example, may have a faint whirring sound due to the spinning color wheel. The projector may also vibrate if it is set up on a tabletop without proper dampening.

If the noise level of a projector is a very big deal to you, then consider building or buying a projector hush box. This essentially "hushes" the projector and makes it much quieter through the used of sound absorbing materials.

What is a good resolution for a projector? The best resolution for you depends largely on your screen size. Ideally, the higher the resolution, the crisper the image will be. For screens that measure 130-inches or more, a 4K projector is the better investment. Nevertheless, at a minimum, you should not invest in a projector with less than 1080p resolution. In addition, poor input quality will result in an equally poor projected image. Above, I mentioned that Blu-ray players, gaming consoles and Amazon Fire TV Stick all utilize HDMI connections. HDMI is typically considered a 1080p signal, meaning your projector resolution should be at least equivalent to this value.

What does WXGA mean on a projector? Extended Graphics Array (XGA) is the minimum resolution offered by today’s projectors. (XGA resolutions are those listed as 1024 x 768 and are considered to have a 4:3 aspect ratio.) Wide XGA (WXGA), however, has replaced this resolution as a baseline spec for televisions and projectors alike. A WXGA resolution means your projector produces images up to 1280 x 800 pixels. WXGA is not quite an HD resolution, although many of the lower-end projectors today come with this pixel count.

Manufacturers will provide many different specs on their projectors and it's up to you on what you think is most important. Remember the importance of the different specs described in this article to help you make a more informed decision.

Again, if you are still unsure of what projector you should get, I highly suggest checking out our recommended projectors page. These units are highly reviewed and have great specs that should work for most home theaters and general viewing setups. All at very reasonable price points!