A common misconception is that you cannot have a projector in a living room, but times have changed and it is perfectly acceptable now! There are small form factor projectors that can provide plenty of light for an open style living room. In this article, we will go over a few reasons why it is totally awesome to use a projector in a living room! It’s a great way to transform a normal living room into an entertainment viewing masterpiece! Would you rather watch the newly released action-packed movie or even the next big game on a 55″ television or on a beautiful 100+ inch projector screen? Yeah, that’s what I thought. Typically, people think of projectors being limited to dedicated home theaters or basement converted man-caves. However, projector technologies have improved increasingly over time and even low-end projectors are very capable of producing enough light for an open living room!

The brightness issue. Well…it’s not really an issue anymore.

Not too long ago, one of the biggest issues with projectors was their ability to produce a superbly bright image without the picture being drowned out by ambient light. The brightness of a projector is measured in lumens. It used to be much more expensive to get a projector with a high lumen count, but now it is much more affordable. The number of lumens needed for a room is determined by the amount of ambient light in the room. If there is a small amount of ambient light then the projector will need fewer lumens to properly light the screen. Typically, there is quite a bit of ambient light entering a living room, so you can simply install blackout window shades or curtains and dimmable lighting. If reducing the ambient light proves more difficult than thought, then a projector with a much higher lumen count may be needed. With moderate ambient light, a projector capable of around 2000 lumens is recommended, but if there is a considerable amount of extra light then somewhere near 3000 may serve better. Remember that brighter is not always better! If it’s pitch black in the room and there are 3500 lumens blasting onto your projector screen, it’s going to feel a little blinding.

Positioning. How a projector in a living should be set up.

There are a few different options for positioning a projector in a living room. Usually, the most difficult part is running the cables from the projector to the A/V receiver. You will need to be a little creative in how you plan this out.

Here are a few options for how to set up the projector.

Remember that not all living rooms are suited for a mounted projector or even sitting it on a shelf. Read through these different options, and I am sure you can find one that will work best for you. Also, here are some great ideas for positioning and hiding a projector in a living room. 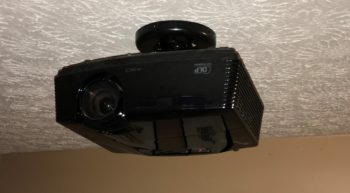 Projectors are typically ceiling mounted in home theaters because the ceiling isn’t too high, but with some living rooms, this may prove to be a little more difficult. The cables should be run through the ceiling with this method to yield the best possible result. You don’t want cables running up and down your walls because it will definitely look tacky and a little off-putting. Our projector is ceiling mounted, and we had to run the cables through the attic, over, then down to the A/V equipment. It was a pain in the rear end, but it looks outstanding and was completely worth the time and effort put into it! It was the best method for the specific layout of our living room. There are actually many ceiling mounts that can hide the projector while it is not in use. They have motorized lifts that can move the projector into a cavity in the ceiling, but these can get pretty expensive and may be difficult to install. You can use one of these if you don’t want the projector to be visible at all times. I personally suggest using a standard, fixed ceiling mount. Here is a great ceiling mount that will work with almost all projectors.

Option 2 – Set on a shelf behind the viewing area.

If the living room ceiling is very high, then set it on a shelf behind the couches or chairs. You can use a floating shelf that is mounted to the wall or even use a bookshelf/cabinet. The cables can run a few different ways with this method. You can run them inside the wall up through the ceiling/attic, inside the wall down through the floor (depending on what is beneath the living room), or simply down the wall and on the floor. Running the cables on the floor is actually a pretty good method if you have carpet or something to hide the cables with. You might be able to tuck the cable into the corners of the carpet and walls if there is enough room. This is probably one of the most popular methods for using a projector in a living room because it’s so simple.

Option 3 – On or inside a coffee table.

This may be a little far-fetched, but if you are not a handy person then this may be a great option! Using a ceiling mount, custom built shelf, or store-bought shelf will still require some handiness in running the cables and mounting the projector. For some living room layouts, installing the projector in a good location and running the cables could be extremely difficult. So sometimes, it could be viable to simply set the projector on top of a coffee table or in a crevasse that is facing the screen. You may need a projector with a short throw (Here is a pretty decent projector with a great throw distance). A projector with a short throw means that it can be pretty close to the wall (3 to 8ft), but still project a very large image. The amount of throw needed is dependent upon how close the coffee table is to the screen. However, with this method, it will be extremely difficult to completely hide the cables unless you drill a hole in the floor of the living room or strategically place a rug to cover the cables. If done correctly, I believe this could be a really interesting way to integrate a projector into your living room.

I doubt very many people would choose this option. You may want to use a mobile stand if you don’t plan on having the projector in the living room permanently. You would probably only roll it out for certain movies, big games, or occasions you deem necessary. But you must also think about the projector screen. Do you really want to have a permanent screen for a non-permanent projector? Well, probably not. So you’ll likely want a portable projector screen that can also be moved when you want to actually use the projector. Every time you want to use it, plan for anywhere between 10-20 minutes of setup time. After a while, you’ll likely not want to deal with the headache of moving everything in and out of the living room. 10/10…would not recommend.

How we set up our living room projector! 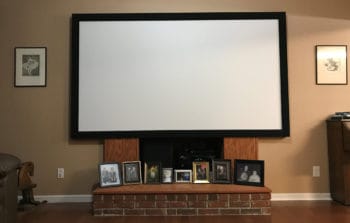 We actually remodeled our living room to install a projector and a fixed screen. A lot of living rooms have a fireplace with a brick/rock structure and a mantel right above it. This is typically where a TV would be mounted. We had to some remodeling of the fireplace in order for it to look right. We removed the top layer of brick, some of the brick inside of the fireplace, the entire metal firebox, and the mantel. After removing all of these things, we covered the striped areas with stained wood and drywall where it was needed. The drywall wasn’t as important because there is a gigantic screen that is covering it anyway. Once we had the wall finished, we added the screen and mounted our projector. We have a 110″ screen mounted inside of a handmade frame and it looks absolutely incredible! You don’t have to use a fixed projector screen in a living room, it’s merely suggested but not entirely necessary.

Conclusion – Why a projector in a living room is totally awesome!

Since we added the projector to our living room, we have watched countless movies, football games, played various video games, and more. It was truly a great way to bring the whole family together! We’ve hosted multiple parties and gatherings of friends/family. And newcomers are almost always impressed and absolutely in love with our setup. It can be a lot of work and a little expensive, but in the end, I believe it’s completely worth it!

For more information on home theaters and how they work, check out this article I wrote: How A Home Theater Works – The Ultimate Explanation for Anyone!

Hi is it a good idea to use a projector in a room with a wood/coal/coke burner......was thinking of a laser pj and most pj's have a sealed light pathway.....what are your thoughts/advice.