A projector hush box is an enclosure used to “hush” or dampen the noise produced by the internal fans of a projector. Some projectors can produce a considerate amount of noise, depending on the components used. You would typically use a hush box in a setting where sound disturbances can negatively affect the viewing experience. A hush box is also used to provide a sufficient supply of air to better cool the projector.

Why use a Hush Box for your Projector?

Picture this scenario. You are sitting in your nice home theater that you have spent countless hours designing, planning, building, etc. You are finally sitting down to watch a newly released movie, but you notice a disturbance in your room. You look overhead and realize that your projector is producing this obnoxious humming sound. You try to ignore it, but as the movie goes on, you continually fixate on the annoying hum coming from your projector. This is where a hush box would really come in handy! If your projector were placed inside of a hush box, it could dramatically reduce or even completely silence the fan noise being produced. The last thing you want to hear during a key dialogue scene is your clunky projector’s fans blasting away in your ear.

Components to a Hush Box

The box itself is usually built from wood. Now, wood isn’t the best insulator of sound, but it a great material to build a box out of. What other material would you use? So the physical enclosure should be approximately 3-6 inches larger than the projector in each dimension. For example, if the projector is “12.2 x 11.2 x 4.8 inches” then the enclosure should measure around 17x16x9in. The hush box should be this much bigger to allow for proper airflow, heat disbursement, and room for other components. If the enclosure isn’t much bigger than the projector, then heat will now exit from the box correctly. This can cause the projector to overheat and randomly shut down. Overheating can cause some serious issues to the projector, and possibly become a fire hazard! It is also recommended that you use two layers of wood when building the hush box. One outside layer, and one inside layer. This helps trap the sound within the projector because sound doesn’t easily pass through a double-layered wall.

Sound absorbing foam is the main component that will actually help reduce the noise produced by a projector. Sound naturally passes through the air and bounces off of walls. If you set a projector in a wooden box with no insulation material, then it could actually increase the amount of noise produced. The sound waves will bounce all throughout the box and actually increase the loudness of what is contained within.  Sound absorbing or sound insulating foam is specifically designed to absorb the sound like a sponge would absorb water. The foam is usually made of a very soft material and sound typically has a difficult time bouncing off of soft materials. But do keep in mind, the sound absorbing material will not absorb all of the sound waves. They will simply dampen the amount of noise produced. Acoustic foam is really cheap as well, you can get plenty + some for less than $15. Ideally, the hush box should be completely lined with sound absorbing foam.  Extra foam can also be positioned in certain ways to increase the effectiveness of the sound absorption. 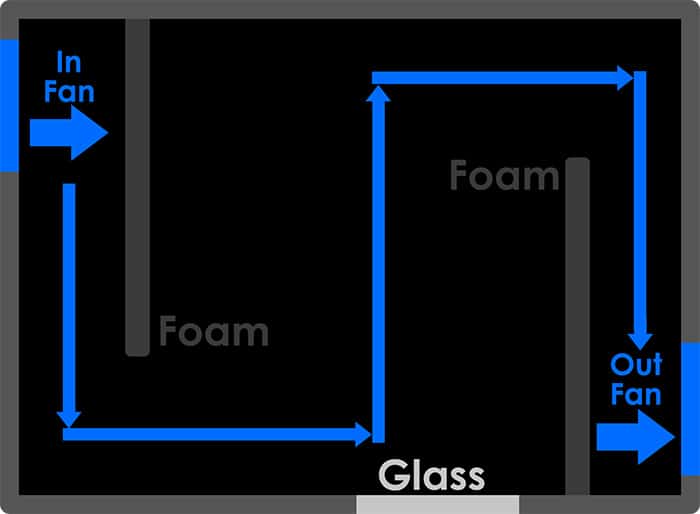 An example of a layout for a Hush Box.

A hush box should have fans installed to help circulate the air more efficiently. If the air isn’t moving quickly enough, the box can quickly overheat and cause the projector to randomly shut down. A projector usually has single or multiple intakes for air to pass through and cool the projector. A hush box should have semi-large PC fans installed. Larger fans tend to be quieter and can move much more air than a smaller fan. A fan should be positioned so that more air is being pulled into the box where the projector intakes are located. Then another fan should be located on the other end of the hush box to help move the heated air out. It’s suggested to use fans with a low noise rating. This is measured in dB (decibels) or dBA (A-weighted decibels). The fans will, of course, need to receive power as is true with any other electronic device like Fire Sticks (more on that in our guide) and more. They can be powered by using a 12V trigger (if you are pretty handy). Or you could connect the fans to a power adapter, then connect it to a “smart outlet” that you can set to turn on with your projector.

Air Filtration and Removal of Dust

Keep in mind that dust will enter the hush box. If too much dust accumulates, this could actually cause the fans to be even louder than normal, as well as, overheat the projector. A projector’s electrical components are very sensitive and dust will definitely affect its integrity. You can add dust filters to the intake fans that are installed in the hush box. Adding dust filters should keep mass amounts of dust, debris, etc. from entering the enclosure. Unfortunately, the filters will not be able to block 100% of the dust, so be sure to clean out the hush box occasionally. Without any air filtration, expect to clean the enclosure pretty frequently!

Definitely build a hush box! The issue with buying is that they are not commonly sold to everyday consumers. The ones that can be found online range anywhere from $500-$2500 for a smallish home theater projector. Now, it wouldn’t make any sense at all to spend this much money on a box for your projector. At that price, you are better off just purchasing a different projector that runs a little quieter. I highly suggest, spending a little time planning and building your own hush box. Here is a great build for a simple hush box. I would highly suggest modeling your own hush box similar to this one! It looks great, and the placement of both the fans and foam make this box very effective. One similar to this will definitely reduce the audible sound of the projector and should have no issues with overheating! I will be posting a guide on building my own hush box soon!

A hush box is a great investment for a projector that runs a little loud or hot. It may take a little handiness to do the initial build and install, but it is totally worth it in the end! If you build it and stain it correctly, then it adds another layer to your masterpiece of a home theater. It can even help prolong the life of a projector by protecting it from outside forces, such as dust, overheating from lack of airflow, and flying objects which is especially important if you intend on using it outside as we’ve explored before. If you don’t want to build a hush box or aren’t able to, then consider purchasing a projector with a lower noise level. If it’s not too late, consider purchasing a short throw projector! With a short throw projector, you can position it much closer to the screen. Therefore, it should not be directly overhead and won’t distract you quite as much! I wrote an article explaining everything about them. Check it out: What is a Short Throw Projector?

Wow! That is a really great guide! You covered every angle!! Awesome!! So, I was reading it because we sell OptiClear glass and I was wondering how ppl get their glass for hush boxes. We (American Computer Optics) have been selling glass to major studios and movie houses for their port windows for about 30 years now. So we just came up with an awesome innovation: A 'Ready-to-Install" port window (you know, what separates the projector from the audience). Anyway, I was researching and i started wondering about hush boxes. So now, since you are so well versed on the subject, can you give me a little advice as to how I can get the word out about our glass (which meets THX standard and dual glazed is STC Rating 39-for noise isolation. Our website for projection glass is: HomeTheaterGlass.com Thanks for any and all advice! Leah jacobson