The Fire TV Stick 4k is an impressive piece of technology, allowing you to simplify your home theater setup by avoiding large, bulky set-top boxes. But many are annoyed to find out that it still needs to be plugged into the included AC adapter, requiring a cord draped from the TV to the wall. But this AC adapter is just powering a USB to micro-USB cable…couldn’t you plug that into the TV instead?

You can power the Fire TV Stick off your TV’s USB ports, but to address “insufficient power” warnings you’ll need a special USB to micro-USB cable.

Luckily it’s not expensive, making this a great solution!

I know, I know, one more thing to buy. But don’t worry – the new cable is the nuclear option. There are a few more things you can try, which we’ll address below. You’ll be able to troubleshoot this and figure out if you need that new cable in minutes. But first, let’s be clear on which Fire TV Stick we’re talking about.

Click or tap here to jump straight to the solution.

Getting the Hardware Straight

Just because the 4k one pushes 4k content doesn’t mean it needs more power, so, luckily we get a pass on having to figure out which exact solution goes with which streaming stick here. Both of these variants require the same power input: 5v at 900mA, and if you don’t know what that means, don’t worry, it’s the last time you’re going to see detailed electrical values in this article. Thank goodness.

Where the story gets interesting for these devices is that, during the unboxing, you’re going to find an AC adapter that needs a wall plug, and that’s going to need to attach to your Fire TV Stick. Here we were, thinking that the HDMI streaming stick was going to be simple, requiring fewer wires, etc., but in reality you now have something else you need to plug in.

This isn’t automatically a problem, but for some there’s not a spare plug reachable. After all, this is your entertainment system…plug real estate isn’t cheap and if you have speakers, other set-top boxes, a video game console, you’ll run out of plugs quick. You can attach it to your TV over USB to try to get power over the micro-usb port, but that sometimes results in a nasty error message: “Insufficient USB power detected.”

And if you’ve already seen our article on connecting a Fire TV Stick to a projector, you should know that the discussion around USB ports in this article applies to projectors as we. You can actually connect your Fire TV Stick to a soundbar as well (our guide) and you may be able to manage the power through that device’s USB port too.

How Will the Fire TV Stick Work Even If It Isn’t Getting Enough Power?

Already this is seeming a bit strange. If the device is receiving enough power to turn on and tell you it needs more power…how is it even on in the first place? Well, it turns out the Amazon engineers saw this situation coming a mile off and realized that if they simply didn’t allow the TV Stick to power on with insufficient power, everyone would assume that they’d just opened a package with a faulty unit.

So the Fire TV Stick has the equipment to power on and checks the power even when that power level isn’t quite high enough so that it can alert you. That’s great. It doesn’t solve the problem but at least we know for sure what the problem is. The cable can’t be the bottleneck, because the USB cable that comes with the Fire TV Stick works with the USB AC adapter, leaving only one variable: the power output from the TV.

That’s right – we’ve narrowed it down the TV’s usb ports, and you probably see where this is going: those ports are there for something like a flash drive, equipped with enough power from the TV to access files and not much else. The Fire TV stick is basically a small computer, and the TV’s USB ports sometimes just can’t put out enough juice…at least not without a little help.

Are There Any Ways Around the Low Power Issue?

There is at least a small chance that you’ll get lucky and find a souped up USB port on your TV that is designed to power a larger device. They’re not super common, but more TVs are including them all the time due to hardware like wireless headset base stations and, of course, streaming sticks. So if you try to power the Fire TV Stick off your TV’s USB ports and it works, congratulations.

If you get that error, though, you do have some options. First, you can, of course, use the supplied AC adapter. It’s not an elegant solution, and it’s not going to address the cable management you’re almost certainly hoping to avoid, but it is technically an option. If the number of plugs is the problem, another power strip with more plugs might help you out.

Another way to get around the problem is to go hunting for another powered USB port. You’ve no doubt run out of plug real estate because of all that other equipment hooked up to your Television, but maybe that’s not a bad thing in this situation. After all, that equipment–especially if it’s a modern video game console–may have USB ports of it’s own. USB ports with more power than the TV.

You can hunt around for another powered USB port nearby, and then use the USB cable to run off that equipment, and that may get you from A to B here. But it may have it’s own complications…such as the Fire TV Stick powering off along with the XBox. There is another option though. 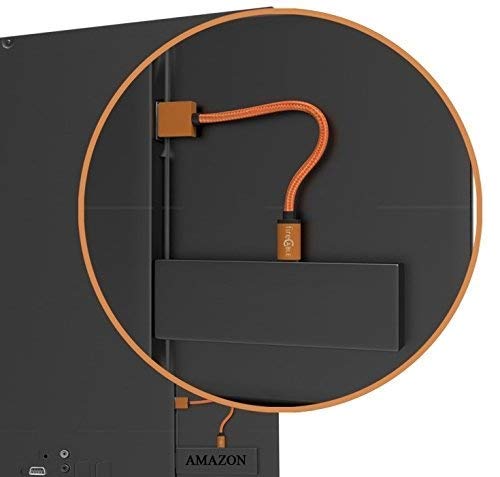 I know the last thing you want to hear at this point is that you may have to buy yet another component for your home theater system, but at least this one is cheap. The fire-Cable Plus (on Amazon) solves this problem in a very interesting way. You can tell by the name that it’s a dedicated piece of hardware, which is at first a little suspicious.

After all, this is just a micro-USB cable, right? What could it possibly be doing to fool the TV into sending more power out of its’ USB ports? Past the flashy orange coloring and braided exterior, the fire-Cable Plus claims to have an “inner core built with premium heavy copper providing maximum power supply.” This sounds a little wishy-washy, but the reviews are there: plenty of customers report that after swapping the stock cable out for this, the power warning goes away.

What’s going on here? A bigger, thicker copper core may actually transmit more power. Or the length – going from the supplied 5ft cable down to a 6in cable, that reduction may allow more power to get from the USB port to the device. Practically, though, this solution has helped many ditch the AC outlet need of the Fire TV Stick, so it’s at least worth a shot.

At this price point, if this is something that would simplify your setup or make things easier, it’s a no brainier. When it comes to home theater’s, a little bit of elegance and tweaking goes a long way, and this is a great example of that.

Hey ,just bought firetvstick,and had no way to get power to it,a lot of cable buried behind walls. So the fire cable plus will,I hope solve this problem.Have not tried it yet.

Here is a way to get constant reliable power to the Fire TV Stick 4K. It works if your TV is a long distance from a power receptacle or if you are running cables through walls:

1. Add a Y splitter for your TV power cord at the TV end of the power cord. 2. Add a NEMA 1-15R adapter for the Fire TV USB power adapter to one of the splitter outputs.

Mega useful for a non-teccy!