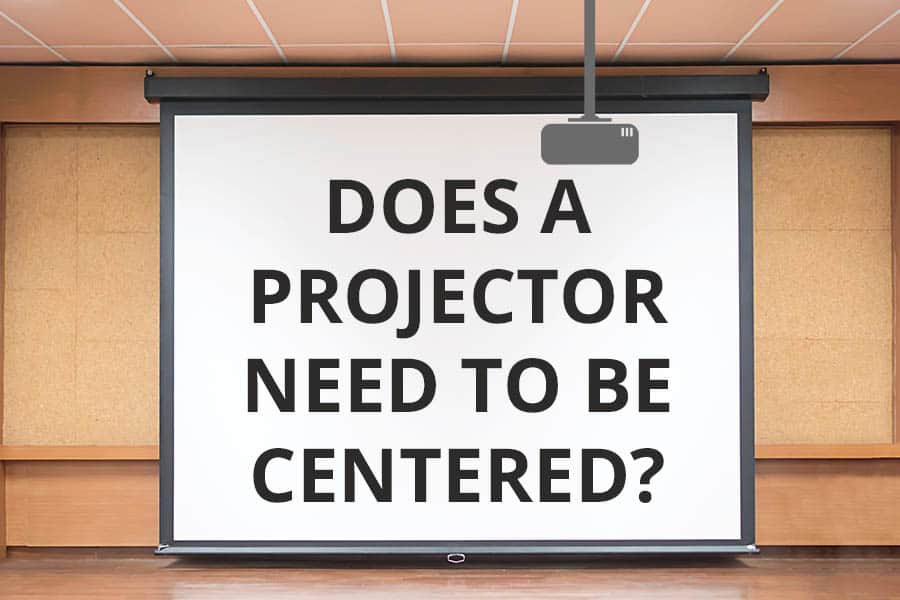 It’s easy to get caught up in all the details of building the perfect home theater, all the file formats, cables, questions on resolution, wireless video, etc. etc. Honestly, it can be a bit exhausting. It’s easy to make assumptions because that’s one less question you need answered, right? But today we’re going to take a minute to talk about a question that many people forget to ask: do you really need to center your projector when you install it? What about pico projectors? Does the same rule apply (more on that here)?

But already I’m sure you have more questions than answered. Horizontal lens shift? Keystone correction? What’s going on with all this terminology, and how do you use those answers to understand if you can just mount the thing off to the side of the ceiling fan or recessed lighting blocking the center-line already? I’m glad you asked.

How Do you Center a Projector on the Screen?

Look, there’s no getting around the fact that mounting a projector on the center-line is physically easier--with a little string or a trusty measuring tape you can mark a spot on the ceiling by eye, fine-tune the measurements to make sure it’s centered, adjust as necessary and get the drill out.

But plenty of things can get in the way. Beyond fans and electric lights, physical skylights, air vents, recessed speakers, any of that can make your install a little less than straight forward.

What If You Can’t Physically Center a Projector?

There are options for dealing with this, tried and true methods that fall into one of two categories: lens shift and keystone correction. At first glance, they may seem like the same thing--it’s all manipulating the image to fit the screen right? Yes and no. Examining a few more details about each is helpful for understanding the solution to our off-center projector problem.

First, and most importantly, you should understand that keystone correction is a digital manipulation of the image, not the physical light source. Because of that, it’s taking the image and reprocessing it some. This is going to play havoc with the final resolution and may be especially problematic when it comes to text and other fine details (like if you’re projecting a computer screen to do work.)

But it’s not all bad news; those problems with resolution wonkiness really only reveal themselves when you put yourself in a position in which you have to crank the keystone correction all the way up to eleven. Like anything good, keystone correction is best used in moderation: when a mild offset of the projector causes a little warping of the image.

For an offset projector, this means you will want to be minimizing the rotation of the projector as much as possible. If the projector is mounted on the center-line, it’s pointed straight forward. If it’s mounted a foot to the left, you have to rotate it to aim at the center-line of the screen, and that will make the light on the left side of the screen spread out more--warping that leads to the left side of the image being physically taller than the right, putting you in a position where keystone correction is your only tool.

But what if you could mount the projector off the center-line but not rotate it at all? Enter Lens Shift.

As opposed to Keystone correction, Lens Shift is a much more elegant solution in that it is a physical manipulation of the light, not the source image. Thus, it doesn’t open the image quality up to degradation from post-processing or warping. Instead, it moves the image up, down, left, and right, while maintaining the resolution and fixed aspect ratio, like magic.

Compared to our example above, you’ve been forced to mount the projector a foot off the center-line, but instead of rotating the projector to face the center-line of the screen, you point it directly at the wall ahead, so that when you turn it on the image is (who’d have guessed) a foot too far to the right.

If you’re sensing a “but”, then you’re getting the hang of this home theater stuff. This fancy lens shift technology comes with the same catch-all that a lot of fancy technology does: price. Lens shift comes in two varieties, vertical and horizontal, and horizontal is less common. What’s more, the range is measured in the % of the image width and will fall anywhere from 5% to 50%.

What’s more, the feature is rare enough that many pricey projectors (like the JMGO J6S Native 1080P Full HD 4K Projector) don’t even offer lens shift. While others like the ViewSonic PRO9800WUL Lens Shift Projector offer it as a selling point while infuriatingly not publishing the % where it can easily be found. After searching through the product data sheet, the horizontal lens shift is +/- 10.3%. Found on this datasheet.

It seems that for a feature like this and a sense of professionalism about the whole thing, you have to go nearer two thousand dollars than one with the likes of the Epson Home Cinema 4010 4K PRO-UHD that at least explains directly that it has 47% horizontal lens shift.

So What Do You Do?

After all this information, and especially knowing that the best way to fix off-center projectors is likely expensive, it’s worth reexamining the premise. Is this important? Does it matter that much that you can’t center the projector? Maybe you’re feeling close to punting: finding the longest throw projector you can and just mounting the thing on the back wall, easily sidestepping to anything blocking your way on the ceiling.

But, mounting a projector off-center, while not ideal, isn’t all that bad. There’s actually a lot of wiggle room here. Although I painted a picture above that finding a high enough horizontal shift to be useful (as far as % lens shift capability) might be out of your price range, the truth is that you might only need a little lens shift to get you out of a tough spot if you work along with the keystone correction.

I know, I know, we just talked about how keystone correction is going to chew up your image quality and warp the image, but remember I also said that it was OK in moderation.

Just like a sandwich with only peanut butter or only jelly is going to be worse than one that has them both, this off-center problem is probably going to best be solved with both tools you have on hand: a little lens shift, and a little keystone correction.

Getting the Mount Location Right

Here we are, the big moment. You’ve measured everything, and you think that between the lens shift and the keystone correction you might have a chance at mounting your projector 1 foot to the right (or wherever) and get away with it.

I’ll assume that you can get to the point where you can mark where the projector should go, because if you’re not comfortable getting that far, it’s probably better to just buy some hole-patcher and eyeball it, as long as you’re ready to do the job again if it’s too far one way or the other.

You should be able to eyeball it because the goal is still somewhat the same: get as close to the center as you reasonably can. Then, the throw distance of the projector sets the distance from the screen. When you have the projector up, be sure to not tighten all the bolts just yet, remember we’re going to be rotating it some, but we don’t know how much yet.

Getting the Projection Right

Now turn the projector on and see how the image looks. This is where the fun starts: point the projector directly at the wall and see what you can do with the lens shift. If it doesn’t get all the way on the screen, then rotate the projector toward the screen until the side that’s off it is on. This way, you’re using all the horizontal lens shift you can, and the minimum amount of keystone correction.

You can tighten the bolts down now--if it doesn’t work here it’s not going to work at all. Then use the keystone correction to try and get the image completely on the screen. When you get that far, you’ll need to do the whole exercise vertically.

Now, fire up some content. If you can’t see any problems with the image (especially on the side that would have been squished into place by the keystone correction) then you’re there: with any luck, you won’t have to touch that projector again for the next five years until whatever video standard they dream up then starts to become essential.

So, this isn’t hard right? With a little time and a little effort, no smoke detectors or errant support beams need to stand in the way of your home theater.

You can always find a solution (so long as your willing to pay for it), and with any luck, you’ll be able to find a projector in your budget that offers enough horizontal lens shift and keystone correction to best fit your needs. And if that doesn’t work, there’s always the back wall!