You’ve probably heard about home media servers or media centers. They have many different uses, but its main responsibility is to provide media such as movies, tv shows, games, music, etc. in a centralized manner. The media server is made possible through the use of a NAS (Network Attached Storage) enclosure or a dedicated computer. With this type of system, you are able to watch view content on a connected television or stream it through your home network on various devices.

Steps to Set Up a Media Server

For a more detailed explanation of each step, continue reading. We will go in-depth on all of the above steps. This includes whether you should use a NAS enclosure or a regular computer, what type of hard drives you should use, connecting the device to your home network and how it should be configured, what apps or programs you should use and how to transfer your files. It’s a lot to go over, but I’ll make this as simple as I can!

1. Buy a NAS Enclosure or Set Up a Computer as the Media Server

Choosing whether to buy a NAS or to build/repurpose a computer to use as a media server is dependant upon a few things. How many roles do you want the machine to fulfill? How much time do you have to sink into this project? Are you a very “tech-savvy” individual or do you know enough to get by? What’s your budget?

A NAS (network-attached storage) media server is an enclosure with slots or bays for hard drives and has the ability to distribute files/media throughout a network. When using a NAS as a media server, it will need to have a decent processor and RAM/memory. Its purpose is to provide high-quality video to one or even multiple sources without buffering. If it has a slow processor or small amount of RAM, then it will be more susceptible to buffering or lag. The NAS can perform transcoding to deliver one type of media to any type of device. Keep in mind that not all devices use the same type of file. Transcoding is taking one type of file and making it compatible to play or view on most devices (computer, tablet, smartphone, fire tv, etc). Transcoding usually uses a significant amount of processing power. This is why a NAS has a built-in processor and RAM, just like a normal computer. Except, the NAS’s processor and RAM are purely dedicated to serving, transcoding, and handling the files and media contained on the hard drives.

I recommend either the QNAP TS-251+ 2 Bay NAS (click for current Amazon price) or the Synology DS218+ 2 Bay NAS (click for current Amazon price). Both of these units have 2 hard drive bays available with 2 GB of pre-installed RAM, expandable to 6-8GB. The QNAP has a quad-core 2.0GHz processor while the Synology has a dual-core 2.0GHz processor. So, the QNAP is a bit faster but is barely more expensive. I suggest either one of these units as a NAS enclosure option!

Typical Computer set up as a NAS Media Server

A computer set up as a NAS media server is basically a computer that is specifically being used to distribute files and media. Generally, a computer set up as a NAS media server should be dedicated to this task, and maybe a few smaller tasks. It should not be bogged down by other processes such as web browsing and everyday typical computer uses. Its main purpose is to store the files and media on its hard drives, then distribute and/or transcode them when needed. It serves the same purpose as a NAS enclosure except it’s exactly like a normal computer. The nice thing about using a normal computer as a media server is that you have a ton of flexibility! Between the hardware, operating system, applications, etc. there are so many options available to you for full customization.

Pros to a Typical Computer as a NAS Media Server:

Cons to a Typical Computer as a NAS Media Server: 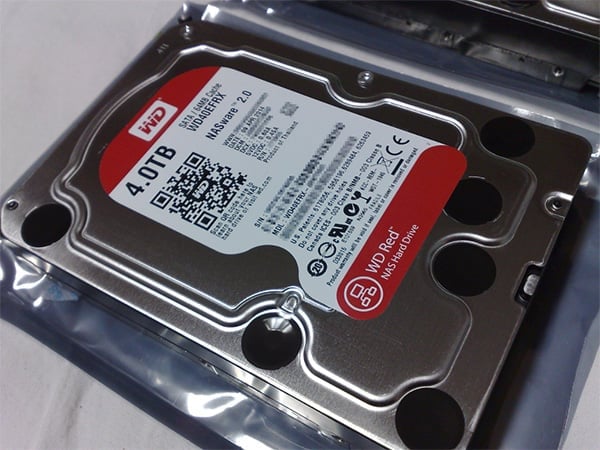 All NAS enclosures and almost all desktop computers will use 3.5-inch internal HDDs (hard disk drive). There are many different types of hard drives out there. They are usually designated with a color such as red, blue, green, black, purple, or gold. Each of these colored drives should be used in a certain area. NAS drives are designated with the color Red. They are slotted to fit inside a NAS enclosure. NAS drives are built to run 24/7 and have a higher read rate than typical HDDs. Red drives also support RAID (redundant array of independent disks) configurations.

Without getting too complicated, there are two raid configurations applicable to most NAS enclosures and computers for media servers. Any RAID configuration should use identical hard drives. RAID 0 “stripes” data across two drives. This means you are able to use the full capacity of both drives and should achieve twice the read and write performance. However, with this RAID configuration, if one of the drives stops working, you will lose the data on both drives. It is not very reliable and typically not recommended. RAID 1 “mirrors” data to have an exact copy of the data on each drive. But this means you sacrifice half of your total storage amount. In the event that one drive fails, you will still have an exact copy of that data. For more info on RAID configurations, check out this video.

I definitely suggest using identical, red, NAS hard drives in a NAS enclosure or computer being used as a media server. I recommend either the Seagate Iron Wolf NAS HDD or Western Digital Red NAS HDD. Below is a comparison chart of the 2TB (Terabyte) model from both Seagate and WD.

Realistically, you should get a fairly large amount of storage. Get more than you expect that you will need. Once you have everything set up properly and it’s working well, you will start to use it more than you initially thought. Realistically, you should get as much storage that will fit in the NAS enclosure or computer and that you can afford. Don’t break the bank purchasing an obscene amount of storage you may never use. For an average user, 4TB will probably be plenty. For a power user, 8TB+ is generally recommended.

3. Connect the Media Server to the Network

Next, you need to connect the NAS media server to the home network. Delivering high-quality media to different devices will require a high network speed. Your media server will have issues delivering media to devices if it has a slow network speed such as 10Mb/sec. Most NAS enclosures will have at least one GbE (gigabit ethernet) port. A gigabit ethernet port allows for transfer speeds of up to 1Gb/sec (1000Mb/sec). Keep in mind that internet speed is different than network speed. Internet speed is how fast a device can download/upload data outside of your home network (i.e. accessing a website). Network speed is how fast a device can download/upload data inside the home network (i.e. transferring a file from your laptop to your desktop computer).

Here are a few things to keep in mind when connecting the media server to your network.

A maximum transfer speed of 1 Gb/sec isn’t absolutely necessary, but it is a very large step up from 100 Mb/sec. You will notice a pretty significant increase in performance with higher transfer speeds.

Once the media server has been connected to the network, we can now transfer the media and other files to it and install any necessary applications. This is where it’s difficult to give exact instructions because it varies for different setups.

For a NAS enclosure, the manufacturer will provide pretty specific instructions for initially setting the unit up. Simply follow these instructions, and transfer your files to it through the preferred method. You can transfer files directly from your computer or external hard drive. A NAS enclosure’s operating system will likely have an “app store” with various apps to install. The most popular media server application for a NAS enclosure is likely Plex Media Server. You will need to pay a yearly fee for access on all devices, but it’s definitely worth it. The Plex Media Server application is very advanced with its transcoding and file management methods. It’s able to offer your media on almost device such as a fire TV, Apple TV, smart TV, tablet, smartphone, computer, etc. If you prefer to use a different service then there are plenty of options available. Remember, a NAS enclosure isn’t just meant to be a media server. There also tons of other apps available for backup/syncing, content management, entertainment, home automation, security, and more. It has access to many applications to make it more than just a simple media server.

For a Computer NAS, set up and configuration is a little more complicated, but there are a plethora of options available for everything!

With your newly configured and set up NAS Media Server, you are ready to rock and roll! Just install the Plex Media Player (or other media viewer) on your device you wish to view the media on. You will be able to view the media on almost any device from anywhere in your home, as long as you have a decent network connection. Yes, the set up is slightly time-consuming, but believe me, it’s totally worth it in the end!

(This article in no way encourages users to infringe on copyright laws.)

Check out another article on using a projector in a living room. This is a great way to amplify your home entertainment experience!

You state to connect the NAS to the router via Ethernet, but will I access this home server wirelessly with my various devices? Thanks.