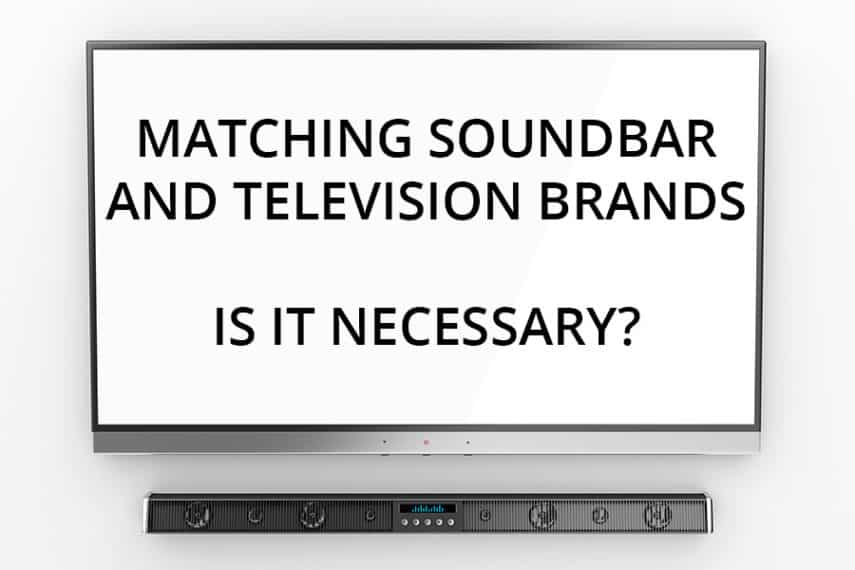 I was recently chatting with someone about our home theater setups, and an interesting question came up. “Do you think that the brand on the soundbar should match the television brand?” he asked. My knee-jerk reaction was, “Well of course not, if they can connect why should it matter?” but after some pondering, I had to do some definitive research.

So, do soundbars have to be the same brand as the TV? It is not necessary to match brands for your soundbar and TV. With that being said, there are a handful of benefits to doing so, such as single-remote syncing, matching sound features, design compatibility, and possibly other special features.

There is very little information online about this. After doing some deep digging, I eventually decided to directly contact Samsung and Sony to ask questions about this. The answers I got from both brands were informative and interesting.

What the Brands Have to Say

Now, the first thing to remember is that brands are inclined to insist on buying more of their products. While this upcoming information is very helpful, keep in mind that many of the best soundbars aren’t affiliated with brands that produce televisions. Both of the representatives I talked to gave me a lot of helpful information, but the real question is whether or not it justified limiting your options to one brand.

First, let’s talk about what I learned from a Sony representative. They mentioned a few features, specifically related to their top-of-the-line HT-ST5000 soundbar. One of the initial points they touched on is that the soundbar supports Dolby Atmos, which many of their latest television models are also compatible with. While this is a convenient feature, it is important to note that other brands have Dolby Atmos-enabled products.

The Bravia Sync feature is a single-remote syncing feature between some Sony devices that allows for one easily set-up remote control for your entire home theater. The representative’s last point was that you can get matching eARC ports with compatible soundbars and televisions. This also isn’t unique to their brand of products. To summarize, the only thing that was specific entirely to Sony’s brand line-up was the Bravia Sync. Beyond that, it seems that the biggest benefit is the ease of compatibility. If you buy a new Sony soundbar, it is more likely to seamlessly fit with one of their new televisions.

Now let us touch on the Samsung representative’s information. They also mentioned a single-remote syncing option called OneRemote. Another interesting feature they brought up was called the Autopower Link, which automatically turns the soundbar on when you turn the television on. Much like Sony with Dolby Atmos, they talked about a matching DTS sound experience that can be matched by other brand’s products.

The representative also mentioned very generally that the interfacing of their soundbars and TVs are seamless, and won’t have any connection glitches. Overall, it seems very similar to Sony’s stated benefits, in that many of the bonuses could be matched with other brands except for the ease of the syncing features.

So Do Soundbars Have to be the Same Brand as the TV?

So, what is the total takeaway? If easy syncing features matter to you, then it could be worth looking into matching your brands. Many of these companies have built-in features to make syncing easily possible between all of their home theater products. The alternative would be a universal remote, which requires setup as well as trial and error. The other benefit is ease of compatibility. It is very easy to talk to a representative and have them help you find two compatible pieces of hardware in terms of sound features, aesthetic, and ports. Beyond that, there aren’t many downsides to buying soundbars and televisions from different brands. Don’t let these few bonuses stop you from shopping around for the highest quality or the best deal.

For an easy look at many highly recommended and highly tested units, check out our list of best soundbars for the money! We spent countless hours researching and compiling this list to best serve anyone looking to make a soundbar purchase.

What About Curved Televisions and Curved Soundbars

Understandably, these soundbars will only match the curve of specific televisions. This means that if this is a feature you are interested in, you will want to look into the brands that support these sets. Aesthetically this seems like an interesting option, however, the lack of diversity in the products is definitely a downside.

Regardless of whether or not a soundbar will match a television, it is important to consider what kind of connection you want between them. One thing to consider is HDMI ARC and HDMI eARC. ARC stands for Audio Return Channel. Many modern televisions will have an HDMI port that is labeled as an ARC or eARC HDMI port. The purpose of these ports is to allow for HDMI to output audio, as HDMI was originally meant to receive information from outside devices. This is an improvement over optical and coaxial options as it reduces lag time in audio.

eARC is the most recent version of this, with the ‘e’ standing for enhanced. This allows for devices to use higher end audio features like Dolby Atmos and DTS:X. This is a pretty new technology, so finding compatible hardware could be difficult and more costly.

For both ARC and eARC HDMI to work, you will want to make sure that all of your hardware is compatible. Televisions will have a labeled HDMI port if it is compatible, and of course, you can always look at the specification information of the device. You also will want to make sure your soundbar also has this capability, as well as the HDMI cable you are using between the two.

Are you interested in learning more about why you should use HDMI ARC over digital optical? Check out our in-depth article covering the pros and cons of HDMI ARC and digital optical connections for soundbars.

What is Dolby Atmos and DTS:X?

We have mentioned these sound features quite a bit, so what are they? First, to understand these features, you need to understand channels. The easiest way to think of a single channel is as a single speaker or set of speakers within a soundbar that cover a zone (left, right, middle, etc. The more of these channels you have, the better the sound quality. 2-channel and 3-channel are standard for most soundbars, but probably are not going to provide a mind-blowing listening experience. I would not recommend either of these when looking at making a high-quality home theater or home entertainment setup. I suggest looking for a “5-channel soundbar”. We have a great post detailing the key differences between 2.1 and 5.1 soundbars. I highly suggest giving it a read.

Now, you may be wondering, what is the top-of-the-line? 7-channel bars are some of the newest and best soundbars. If you are looking for the highest of quality, this is the level you will want to start your search with. If you are looking for the highest quality, you will want to make sure it is Dolby Atmos or DTS:X compatible. The best-priced DTS:X compatible soundbar on the market is the Nakamichi Shockwafe Pro 7.1 channel soundbar! These two advanced sound systems are both extremely popular, and the better of the two is hotly debated. Luckily, some systems are compatible with both Dolby Atmos and DTS:X so you don’t have to try to choose between the two.