Projectors are an almost perfect solution for your home theater. They give you something closer to the silver-screen feel without you having to mortgage your house for what the larger Television panels cost. However, there is one issue you might run into that’s unique to projectors: reaching the end of the projector’s lamp life. To figure out if your projector’s lamp is dead:

The projector lamp, also called the bulb in some cases, is like your light-bulbs at home but on steroids. The light is, or rather it should be, very bright, bright enough that you can project an image onto your projector screen in a mostly-dark room without even thinking about the brightness. And there is a little more to say here about traditional lamps vs. LED lamps.

Some projectors take the guesswork out of the lamp-life question by offering dashboards where you can review the lamp life directly, or even with on-screen notices when the lamp starts to reach the end of life.

When you first turn your projector on, look for an indicator anywhere on the screen that you haven’t seen before. Only a few units have these on-screen indicators that show up, and maybe even flash to get your attention toward the end of life.

If you check out the ViewSonic 3600 Projector (on Amazon) you’ll see in the pictures where there is a lamp indicator on the top of the unit.

What if There Isn’t an On-Screen Lamp Status Indicator?

If you don’t have a blinking indicator, then you may need to go search out the projector’s lamp life page yourself. Grab your projector’s instruction booklet if you still have it, and flip through looking for any mention of lamp life, and projected remaining lamp life.

Many projectors (but not all) will have a place you can navigate to in the menus that will tell you how long the lamp life has left. If you don’t have your instruction booklet, go ahead and pop into the menus with the controller and see if something obvious catches your eye.

If you still can’t find any status of the lamp life in the projector’s software, the last quick check you can do is to the projector’s hardware. A few models of projectors have lamp status lights installed on the physical projector unit itself. This might take the form of a small LED on the exterior of the projector that will be labeled–you guessed it–Lamp Status.

2) Look at the Image Being Projected, and Consider the Level of Brightness and Contrast to Diagnose the Issue

Getting confirmation from the projector itself that the lamp is failing offers a certain amount of peace-of-mind. However, there are projectors that simply don’t have this feature at all so you can’t tell in this way even if you wanted to (more on what you shouldn’t try with projectors in our do’s and dont’s guide). Nothing to worry about here though, because the way a projector lamp fails is something that you can see and diagnose for yourself.

When the lamp is reaching the end of life, the light will get dimmer, and because of that the colors will appear more washed out and the contrast will start to fall off (brights less bright and darks less dark).  A quick way to get a feel for these things is to turn the projector on and run a few streaming tests.

First, pull up something that you remember watching when you first got the projector. Obviously your memory won’t be good enough for this to be a “side-by-side” test, but you may be surprised at how quickly this can help you get a feel for if the quality has gone down.

You may very quickly recognize a scene that you can say for certain you would have noticed before if the colors were that washed out, the darks were that dim, etc.

If that’s the case though, there’s nothing to panic about just yet. After all, it’s normal for a projector lamp to run out of juice eventually, so your projector will be designed with replacement in mind.

3) Search for a Replacement Lamp, if Necessary 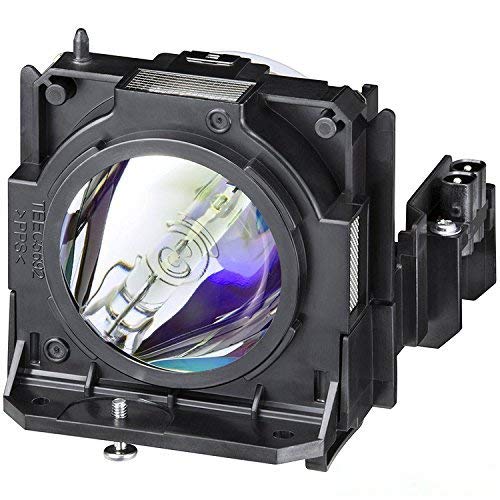 If the projector tells you it’s time for a new lamp, or if through troubleshooting you determine that’s the case, then it’s time to head on over to the manufacturer’s website and start looking for a replacement. Even if they don’t sell the unit directly on their website, the product page for your projector should at least call out the make/model of the lamp.

The only issue you may run into here is if the projector make/model you have is no longer being sold. You should still be able to find a lamp for it, but, it’s just the nature of the beast with projectors that, by the time you’ve had enough time to deplete the lamp life on one, it’s likely been years since you purchased it and now there are newer models.

But projector makers know this, and it will be very unusual for your projector to be so old that you can’t find a replacement lamp. Once you have the replacement lamp, the install should be quick and easy. You may have to remove a few screws holding the projector housing together, but then it’s as simple as pulling the old lamp out and snapping a new one in.

I highly suggest consulting the owner’s manual or even a service manual when you decide to replace a projector’s lamp. 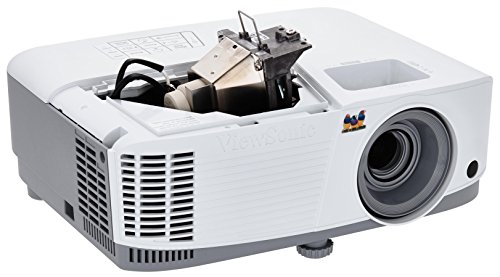 If this is the first time you’ve ever thought about needing to replace a projector lamp, there’s one warning I should give: the prices are not for the faint of heart. It’s not strange for new lamps to price in the three digits, even a few hundred dollars. We’ve discussed on the blog before how reasonable it is to run a projector from a cost standpoint, but this is where that story gets a little more complicated.

While some lamps are cheaper, the lamp cost will likely scale with the cost of the projector you’re using. So, be sure to factor this into your decision making: if you’re committed to the projector life enough that you’ve already run one to the end of its lamp life, $200 towards a new lamp to keep it going may be worth putting toward a new projector entirely.

After all, the one you have now is, by now, a bit outdated. And especially if your projector is old enough that the lamps are less available, costing an even higher premium to find, that might also factor into your decision to perhaps just get a newer unit entirely.

Definitely do some price comparisons when purchasing a replacement lamp. In the past, I found a replacement bulb for $50 when another source was selling it for $200, and these were the SAME EXACT bulbs.

And lastly, a few words on the technology of projector lamps. All projectors should quote their run-time, and when you look at projectors using last-gen incandescent bulbs as their source of light, it’s clear that LED has an advantage.

While a traditional projector lamp might quote a run-time of 1500-2500 hours, it’s not strange to see a projector with an LED lamp quoting numbers north of 10,000.

That order of magnitude difference means that, if you’re up for buying a new projector, or maybe buying one for the first time, choosing an LED option means you will be less likely to have to deal with the projector lamp life running down at all.

The caveat to this is that most LED projector’s “lamps/bulbs” are not replaceable. This means that once you run down the “10,000” hour lamp in the LED projector, you will not be able to replace the bulb. If you want to continue using a projector, you would need to purchase a whole new unit.