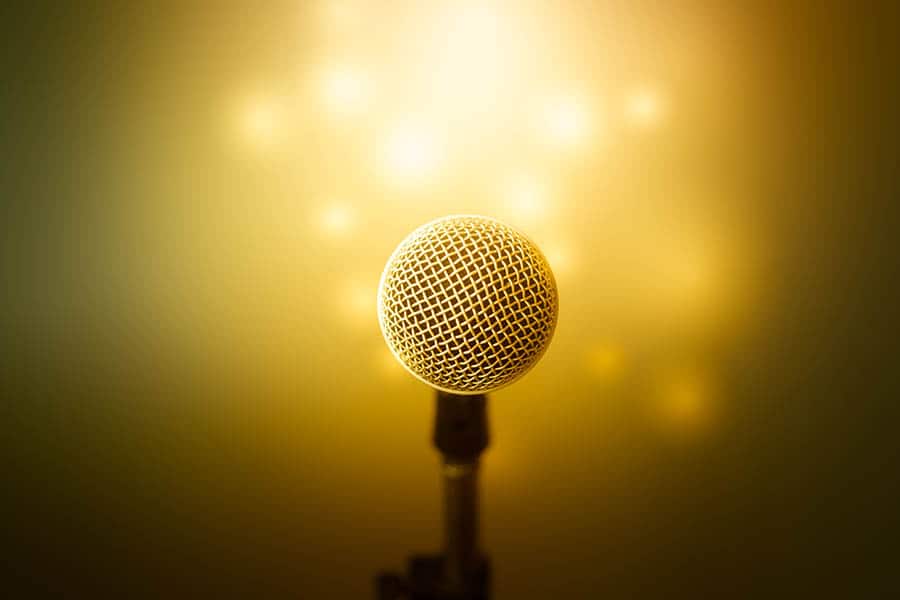 If you’re trying to host a karaoke night powered by your home theater system, there are a few details you need to get right. Using the screen for free karaoke videos on Youtube and running the microphones through your soundbar seems like the perfect solution at first, but once you try to hook everything up it becomes clear that there may be another step.

To connect a microphone to your soundbar for karaoke:

If you’ve never done this before, at this point you’re probably wondering what a karaoke mixer is and why you need one. We have guides about connecting your soundbar to your Television, and detailing how to connect one to your computer--why is karaoke such a special problem that we need another one? Let's talk about this problem, and how to fix it.

The Problem with Soundbars

Glancing at the back of your soundbar, you probably have one or two of several possible audio connection options. Auxiliary or “line-in”, optical, red and white RCA cables, or you may have a soundbar that just runs on HDMI. You can run a karaoke night with soundbars of all input types, but there’s one big problem you’ll have to work with: soundbars don’t have mic-in options.

There’s plenty of audio-in options, sure, but there’s not a dedicated microphone-in port. Manufacturers simply don’t think you’ll need one. And even though there might be multiple input options for your soundbar (RCA cables and an HDMI port, for instance), there’s no way to get clever and simply connect a microphone output to one of those.

When manufacturers plan for what you’ll be using a soundbar for, they don’t ever expect you to need to run two inputs at the same time! You may have an XBox hooked up via HDMI and the cable box through optical, but there’s almost no reason you’d ever want to “overlap” those audio signals. Why would you?

So, it’s immediately clear why a karaoke setup over your soundbar is going to require some extra work: soundbars only play the sound from one input at a time, so the only way to get the Karaoke music singer’s voices to come out the soundbar together is to make them go in the soundbar together--over the same input. 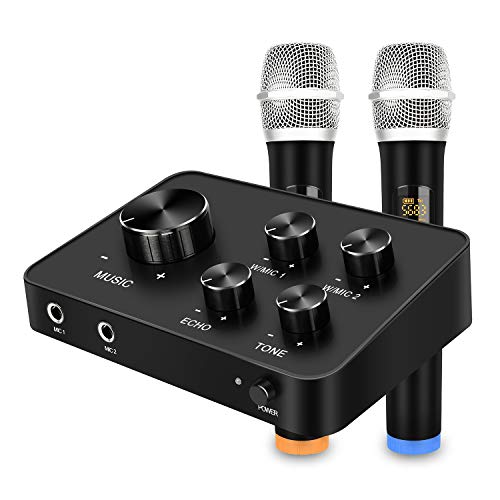 Enter the wide world of karaoke mixers. These devices are made specifically to solve this problem. They have inputs for the microphones, and some models like the Fifine UHF Dual Channel Wireless Karaoke System-K036 (on Amazon) even come with a couple of microphones that are already wirelessly connected, making that one less thing you need to worry about.

And these handy devices also have more features you may not realize you want for karaoke. They’re called “mixers” for a reason, typically having knobs on the front allowing you to control the volume of the music and the individual microphones independently--to mix them--before it’s all sent out as one combined audio-out signal.

The last wrinkle here is that you’ll have to make sure you have the right mixer, or the right adapters, for your karaoke mixer. The Rybozen Portable Karaoke Microphone Mixer System (also on Amazon) has HDMI in and HDMI out, for instance, unlike the unit above. If your soundbar only has an HDMI in, then you’d want a mixer that has HDMI out like this one.

If your soundbar has auxiliary in, then you’d want the unit further up, or whatever converter is required to make sure the audio ports on your mixer match what’s coming from the Television and what’s needed to go out to the soundbar. Luckily, most mixers will come with auxiliary and RCA cables which will help most systems fit together.

How to Connect a Microphone and Karaoke Mixer to Your Soundbar 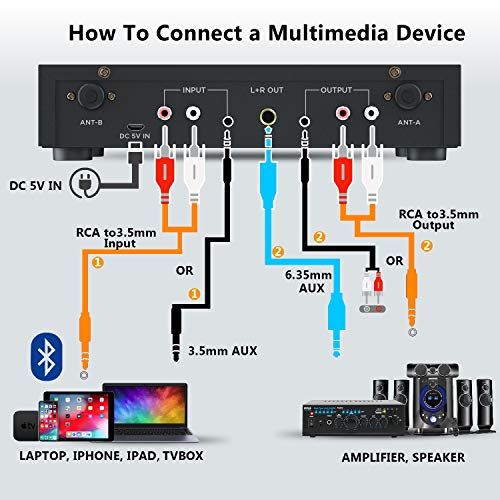 If you’ve got your mixer, your microphones, and your soundbar ready, here are the steps to connecting the devices and getting started:

1) Disconnect the Soundbar from the Audio Source

During normal use, your soundbar is receiving audio input from your Television. Sometimes, the audio is coming to the soundbar directly from a different device, like an XBox or computer that may be hooked up via HDMI. Whatever the case, you need to identify the audio source you want to use, and disconnect that from the soundbar.

So, if you’re planning to use your Television for the video portion of the karaoke, you’ll want to disconnect that cable from the soundbar. If you’re using an HDMI ARC setup, in which the devices are connected to the soundbar first, and then the TV, you’ll need to disconnect the cable from whichever device you’re going to play the karaoke video on.

This may sound a little complicated, but don’t worry: if you don’t know what HDMI ARC is (more on that in our article all about HDMI ARC), then you’re almost certainly not using it. You’ll just be disconnecting your audio cable from your Television to your soundbar, be it HDMI, RCA, optical, or analog.

2) Connect the Television to a Karaoke Mixer

Now, using the cable you just disconnected from the soundbar that’s coming from the Television (or another audio source, if you’re using HDMI ARC), that’s what you want to plug into the “audio in” port on the back of your karaoke mixer.

Depending on the make and model of your mixer, it may take RCA cables, HDMI, analog, or even optical in, but if the ports don’t match, you’ll need an adapter of some kind. You need to make the TV input to the mixer, so if you have an HDMI cord coming from your Television (for instance), you’d be able to connect that directly to the mixer linked above that has HDMI in.

Regardless, you’ll need to find some combination of ports, cables, and/or adaptors that allow you to connect your Television to your mixer, and this will be limited by the Television and mixer’s available ports. This is why it’s good to plan these setups in advance if you can, to purchase a mixer that matches your port availability most easily.

3) Connect the Karaoke Mixer to your Soundbar

By this point, you should be pretty familiar with the ports available on your karaoke mixer. There will be an “audio-in” option used in the step above, and an “audio-out” port that it’s time to use now. Find that audio-out port and use it to connect the karaoke mixer to your soundbar.

The same discussion around ports and adapters at step 2 is also in effect here: you’ll need to match the karaoke mixer’s audio output port to your soundbar’s audio input port. If the ports match then this will only require one cable. If the ports don’t match, it may require an adaptor or cable that has different ends, like a 3.5mm to RCA cable.

4) Connect the Microphone(s) to the Karaoke Mixer 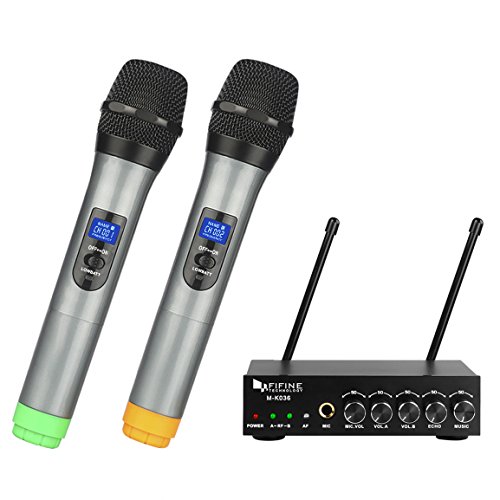 Now that the mixer is routing audio from your Television or video source to the soundbar properly, we can turn our attention to the microphone. You may have multiple microphones for duets or just a single microphone, but they’ll connect the same way: through the karaoke mixer.

Luckily, most karaoke mixers like the Fifine UHF Dual Channel Wireless Karaoke System-K036 (on Amazon) come with their own microphones. This is great because the microphones are paired on different wireless frequencies than most of your other equipment, minimizing interference.

For wireless microphones, if they came with the karaoke mixer they should work as soon as you turn them on (assuming the batteries are charged, anyhow). There may be a pairing process, but if that’s the case you can reference the karaoke mixer’s instructions there.

And you probably won’t want to use this option, but there are some karaoke mixers that will take a mic-in via Bluetooth, allowing you to potentially use your phone or other Bluetooth microphones with the mixer. However, this option may have some signal disruption issues and, let’s face it, if you’re this committed to karaoke you want the handheld microphones.

Now that everything’s connected, you’re ready to try the system out. First, get something playing on your TV (or whatever video source you’re using) and make sure there is sound coming out of the soundbar.

If you don’t hear anything immediately, check the volume settings on the TV, soundbar, and mixer independently. Any one of them may be keeping the volume low. After playing with these, you should be able to get sound from the video source coming out of the mixer.

Now, grab your microphone and say something! If you don’t hear yourself over the soundbar, then play with the knobs on the mixer to try and increase the volume of your voice compared to the music input. Run this test for all of your microphones and you’re good to go!

How to do Karaoke with your Soundbar

I wanted to add one last note here about how to do karaoke over your soundbar properly. If you’ve followed the steps above, you have the hardware sorted out, but to get a karaoke night going you’ll also need to have a strategy for managing the music, choosing songs, etc. And you’ll probably want to do this without fiddling with remotes as much as possible.

Youtube is a great source of karaoke tracks with music and words. It takes a lot of guesswork out of the process and saves you having to buy and coordinate some special karaoke app. And it has a sort of super-power when it comes to the ability to cast videos from your phone.

I recommend running your karaoke night like this: casting songs from your phone to the Youtube app on your TV (with all of the audio managed over the karaoke mixer as described above) because it allows you to cue up songs in advance and hand the “wheel” over to somebody else. This will really allow your party to flow.