Choosing to use a projector over a traditional television for your home theater is a big step. It brings you across a threshold of quality, image size, and sometimes price. Using a projector comes with a lot of new questions, though, and one of the big ones is what type of mount you’re going to use.

Choosing the right projector can be confusing, requiring you to first determine if you need a universal or projector-specific mount. Then, you’ll need to pick a mount with enough customization options to ensure you can get the picture where you want it. Last but not least, you’ll need to consider where and how to install it.

After reading that, you may think it’s time to reconsider using a mount at all. It might seem easier to just put in a shelf in the back of the room or some other ground-up solution. But using a ceiling mount isn’t that bad really. Like anything, there are a few simple steps to follow and, if you stick it through, you’ll be kicking back in front of a beautiful, hundred-plus inch image in no time.

Getting Started: What do you Need?

You should know that there are two broad categories of projector mounts: those that are designed to mount any projector you’ve stumbled into owning, and those designed for your specific make/model or brand. With that in mind, we’ve compiled a list of some of the best mounts to help you make the right choice. It’s very easy to tell which is which, however, because those that aren’t universal won’t have universal in the title. The best way to tell if a universal mount is going to work for your projector is to either 1) review the product page or 2) find a universal mount and verify it will work by measuring it against the screw pattern on your projector. 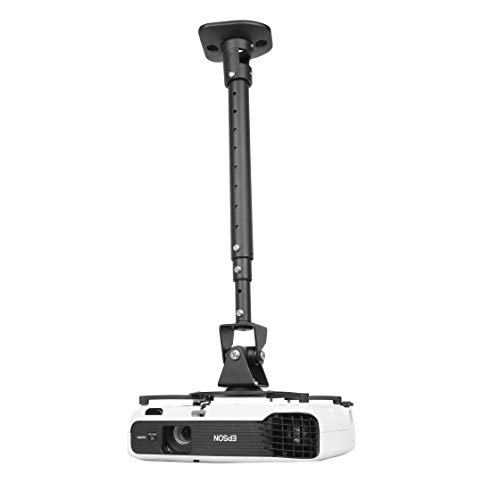 Take the DYNAVISTA Full Motion Universal Ceiling Projector, for instance. This clever design has multiple swiveling arms and a spiral screw-fastening pattern that allows you to connect almost any screw pattern to the unit. If you can look at the screw pattern on your projector and visualize how this mount could be configured to work, there’s a pretty good chance it’s going to fit. After all, that’s what the term “universal” means.

The plot thickens, however, when investigating the Mount Factory Universal Low Profile Ceiling Projector Mount. This unit claims to be universal, but you can see that it has 4 screw holes that don’t move. It does have a spiral of different positions for the screws to go, but this may not work for all projectors.

So what’s going on here? There is a certain kind of “universal” that means “fits standard screw patterns”, and a whole separate category of “universal” that means “adjustable to any screw pattern”. If there isn’t a specific projector mount advertised to fit your projector, you want the adjustable kind of universal mount. Either way, keep the receipt and you’ll be fine. As soon as your mount comes in, and before you start to think about installing it, stop and make sure it fits your projector’s screw pattern.

Customization: What Options Do You Need?

While some projectors have a fixed height, many will allow options, with telescoping barrels secured by tightening screws when you get to the target length. This will depend on how your room is set up, but to cover yourself it’s best to get a projector advertised as “adjustable”.

In the context of projector mounts, this tag indicates that the height of the projector (measured from the ceiling) is something that you can control, and that’s important because, though most projectors offer keystone correction, they can’t handle it all on their end with the software. It’s possible to mount your projector in such a way that no amount of keystone projection can fix it, so, it’s best to get an adjustable mount that would allow you to control the height of projector.

Another way that projectors are adjustable is in the angle of the connection to the unit, in fact, they can be installed at an angle as well (our guide) as long as you’re willing to use keystone corrections afterward. Where the projector connects to the mount, that joint is often flexible, allowing you to “aim” the projector, but this is less important than the height. In a room with a sloped ceiling, this would be important, but for most home theaters, the wall is perpendicular to the ceiling and the ceiling is level (more or less), so this option is good to have, but not critical.

Installation of most projector mounts is simple enough. You need to secure the hardware to your ceiling, and it can’t be done halfway: probably the most expensive piece of your home theater setup is going to hang from here.

The good news is that, if your projector is anything consumer-grade, you won’t have to get fancy here. A big, hulking projector that ways hundreds of pounds might require a special mounting solution, but for almost any projector available on Amazon (for instance) installing directly into the ceiling is not going to be a problem.

Once you know where your screen is, based on the “throw” of your projector you’ll know basically where it needs to be. You need to make sure that the projector is centered on the screen, but front-to-back placement isn’t as critical because the projector’s zoom function can fix this. 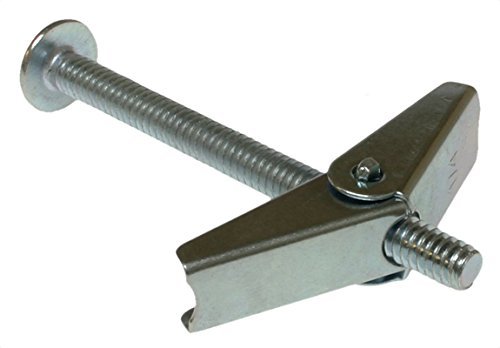 Your projector mount will probably come with its own mounting hardware, but I’d recommend using Toggle Bolts of some kind, just for that added sense of security. When you figure out where you want your projector, then, the next step is as simple as marking the holes for the mount and installing it. It should be obvious how to do this based on what’s in the box but double-check the instruction booklet that came with your mount just in case.

One thing that isn’t very obvious when shopping around for a mount is the metallurgy. A lot of cheaper mounts will be made of steel, which might sound good due to the strength of steel. After all, you want the projector–especially if it’s a nicer, heavier model–to be mounted securely.

However, for the purposes of securing something to your ceiling, the metallurgy won’t matter near as much as how you anchor it. Whether the unit is steel or aluminum, in other words, isn’t going to keep it from falling–the way you anchor it controls that.

So why care about the metal? Well, because projectors get hot. That bulb, on for hours and hours, generates a lot of heat, and that heat has nowhere to go except out the fan and into the projector chassis. When the projector mount is connected to the chassis, it can be a way to help dissipate heat, but steel is exceptionally bad at this. That’s why you should probably check out our other guide on projector mount types so you know what’s out there. So, when you’re shopping around, look for a mount that is made of aluminum – it’s plenty strong enough and much better at carrying heat away than steel.

And one other note that might not be obvious: some projectors have their screws on top, and others have theirs on the bottom. Expensive, modern projectors might have a gyroscope to sense whether or not they’ve been mounted upside down, but what’s more likely is you’ll need to go into the setting and “tell” the projector it’s upside down (to flip the image) after it’s installed, if the screw holes are on the bottom.

Now that you know what’s involved, you’re probably prepared to select a mount and get to the install. Remember to take it slow – you only install the mount once (with any luck) and it’s going to set where your projector lives for years. Don’t be afraid to return a unit that doesn’t work for you, and know that if there’s any problem with the brackets or placement, you’ll know quickly–if anything is going to fail it’ll probably be within the first day or so of hanging there. So, keep your receipt, but know that mounting a projector, like any other home theater component, is a pretty well understood straight-forward operation. If you plan it out properly, you’ll be kicking back and enjoying the view in no time.