If you’re pursuing an entirely wireless home theater (our guide), you’ll probably consider adding Bluetooth to your receiver at some point. There are a lot of different Bluetooth receivers on the market. Not all of them are intended for home theater sound, so you need to know what you are looking for before you hit that order button.

To add Bluetooth to an A/V or Stereo Receiver, you can use a wireless Bluetooth adapter. These devices come in a range of prices based on the quality you need, and they’re simple to use.

Adding Bluetooth to your home theater system including your TV (our guide) can allow you the ability to play DJ right from your phone. You can also play from a number of other devices including laptops and some smart home devices.

How to Install a Bluetooth Receiver

There’s a lot more detail on what to look for in a Bluetooth receiving unit, and how to deploy it below, but first, it’s good to know just how simple these can be to install. The good news is these steps are very simple, and will be the same for any Bluetooth receiver you find. 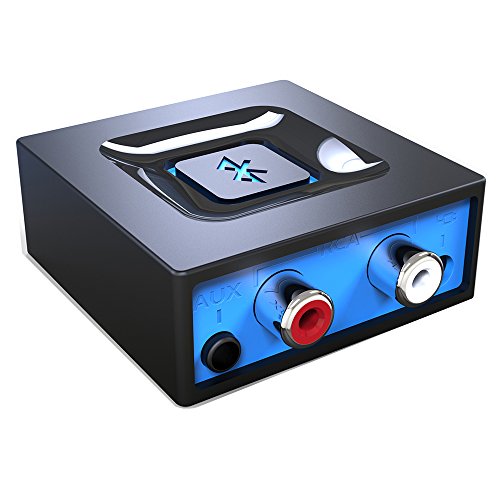 The first step will be to review the information below and gain some confidence in the hardware you’ve chosen. After you pick a receiver though, you can rest assured that the install is mostly the same from unit to unit.

2. Connect the Bluetooth Adapter to the Receiver 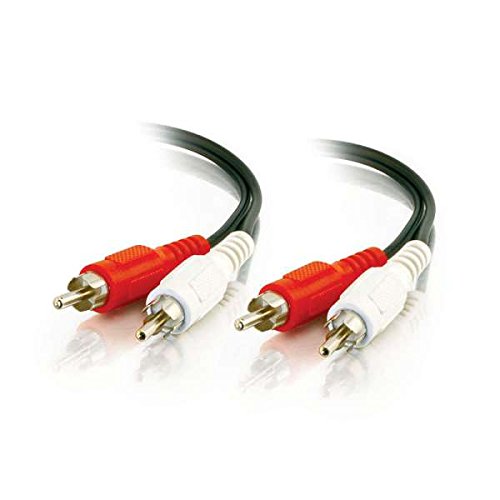 Next, you’ll need to actually connect the two devices using the red and white A/V cables that will come with the adapter. These are also known as RCA cables, and there will only be two of them because of the limitations of Bluetooth technology – it will only carry two channels of sound. We have more details on what sound channels are and how to think about them if you need it, but the bottom line is this is a serious limitation.

3. Connect a Device to the Bluetooth Adapter

With your equipment connected, you’re ready to make the wireless connection. Power on the Bluetooth adapter and connect it to your audio source via Bluetooth, using the pairing method specified by the adapter’s manufacturer.

It should be as simple as turning the unit on and finding it in your phone or computer’s Bluetooth pairing menu, but be sure to check the manual if you don’t immediately see it as an option.

4. Power On and Test

First, make sure you have a Bluetooth receiver with output plugs matching the input plugs of the channel you intend to use on your A/V or stereo receiver. If you don’t have one or can’t find one that matches, get the appropriate converter cable.

Apart from USB connections, Bluetooth receivers have nearly universally analog audio output. If your A/V or stereo receiver only has digital inputs, you may need to buy a converter unit that plugs into the wall.

Generally, there are two kinds of Bluetooth receivers: battery-powered and wall-powered. Typically, battery-powered units are used for the auxiliary input of car radio systems. They seem nice in that they have fewer cables. But they may come at the cost of needing to recharge or replace batteries.

Wall powered receivers are generally better for a home theater system. They might require you to extend your surge protector, but it’s worth it. Once you have it set up, there is practically no maintenance. 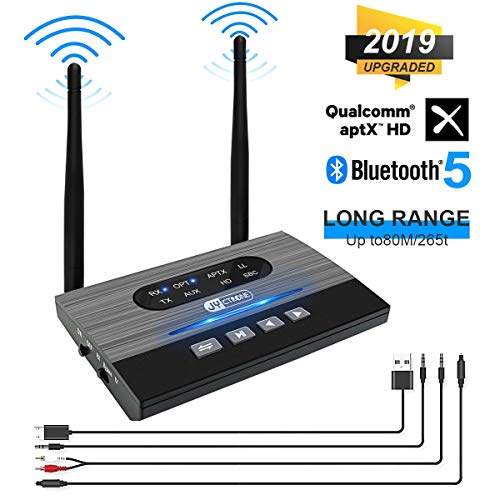 One of the biggest issues with Bluetooth for audio will be the signal strength. If you want the best hardware you can get to try and mitigate the possible issues with wireless Bluetooth signals, you want a unit like the JYctrone 3-in-1 Bluetooth 3.0 Receiver (on Amazon).

The Bluetooth 5 feature will be critical to your signal strength, and this unit also pulls triple duty by being a Bluetooth broadcaster and receiver (more on Bluetooth 5 in our comprehensive guide). So it solves your receiver problem, while also adding more functionality by routing sound to other devices such as from your TV to a pair of wireless headphones. 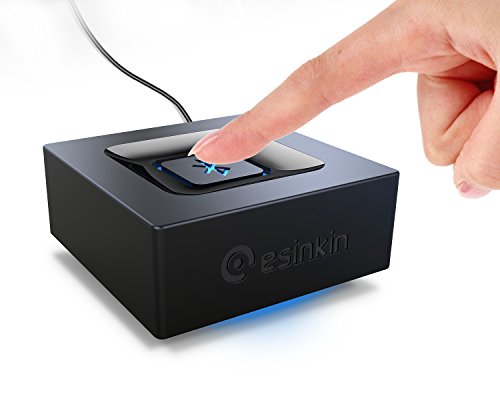 Luckily Bluetooth technology is pretty well understood at this point, and pretty cheap to implement. Units like this esinkin Bluetooth Audio Adapter (also on Amazon) can take in your Bluetooth signals and convert them to left and right channel sound without coming close to breaking the bank.

This option is limited by the low number of channels, but that’s the devil’s bargain of Bluetooth convenience – that wireless signal just can’t carry all the channels.

Bluetooth is mostly intended for broadcasting signals between portable devices, introduced to the public primarily through wireless headsets. Although many modern home theater systems offer Bluetooth connectivity, it should be one of your last resorts for wireless audio transmission.

Bluetooth is mostly intended for you to be able to connect personal devices together without headphone wires or other cables to bog you down. It’s most common for connecting to a car audio system, a portable speaker, or other audio devices you expect to be close by when using.

Bluetooth only has a range of 30 feet. You can use it for a playlist on your phone, but depending on how far you want to travel with it, you may be out of luck. Bluetooth 5 promises three to ten times this range. However, this requires that both the receiver you buy and the device you want to connect to it to have Bluetooth 5. Although it has been available since 2017, it’s still mostly only available in top-of-the-line devices.

Granted, you probably won’t need more, but Bluetooth is only capable of two-channel stereo sound. In the unlikely event that you want to broadcast 3.x or 5.x audio to your receiver, your sound will be compressed into two channels. There is no way to get 3.x audio or higher from a Bluetooth receiver.

Two Ways to Set Up a Bluetooth Receiver

But there are actually two ways to connect a Bluetooth receiver to your home theater. Which you choose will depend on how you intend to use it. This may determine the equipment you need. So, determine which method you are using first before you start making purchases.

This will allow you to select the input channel and play music from any device that can connect to Bluetooth. When testing your sound levels, connect to the Bluetooth with your device’s volume all the way down. Begin playing music and raise the volume to maximum if it isn’t too loud.

The advantage of this method is that the sound is routed through your home theater system’s processing. This means it will be controlled by the master volume. So say you’re having a party where people are fighting over the Bluetooth. You don’t have to worry about someone blowing out everyone’s eardrums with their full volume blast beats.

Some A/V or stereo receivers come with a separate HT (home theater) bypass. This allows you to bypass the preamp stage and send your sound directly through the power amplifier into your left and right speakers and your subwoofer. The advantage here also being you aren’t getting muddy crossover from your center and rear speakers.

This is risky because there is no processing done by your unit whatsoever. That means that your volume control comes entirely from the volume of the audio itself. So if you accidentally connect with your phone at full volume, you could damage your speakers.

So by now, you’re probably in a good position to make a decision. You can get a Bluetooth audio adapter, connect your device, and start living the wireless audio dream. You may be limited to two channels, but that’s the price you pay for the elegance of fewer wires.

Hi, I have Bluetooth adapter connected to my Amp. however it has a weak sound is there a way to increase the gain. What equipment I need to add up? Thank you

I am totally confused ! All I want to do is connect my bluetooth sony headphones to my surround amplifier. Do I need some sort of adapter so I can utilize the output USB ports on the back of the amplifier?

The stand for the headphones has round plugs. Doesn't all sound going into the amp from any source channeled to the USB out ports?

This was very helpful. Ty

Hi I am looking to connect a Bluetooth device to my pioneer elite amp, purpose is mainly to be able to watch peloton on big screen, but listen through Bluetooth headphones. We find that when playing through the surround we can’t hear the music much as the instructor voices are too loud. I didn’t see that solution listed yet wonder if anyone could help😜

To which entrance shoild I plug in the Bluetooth connector in an old amlifier that has Phono / cd / tape / vcr entrances?