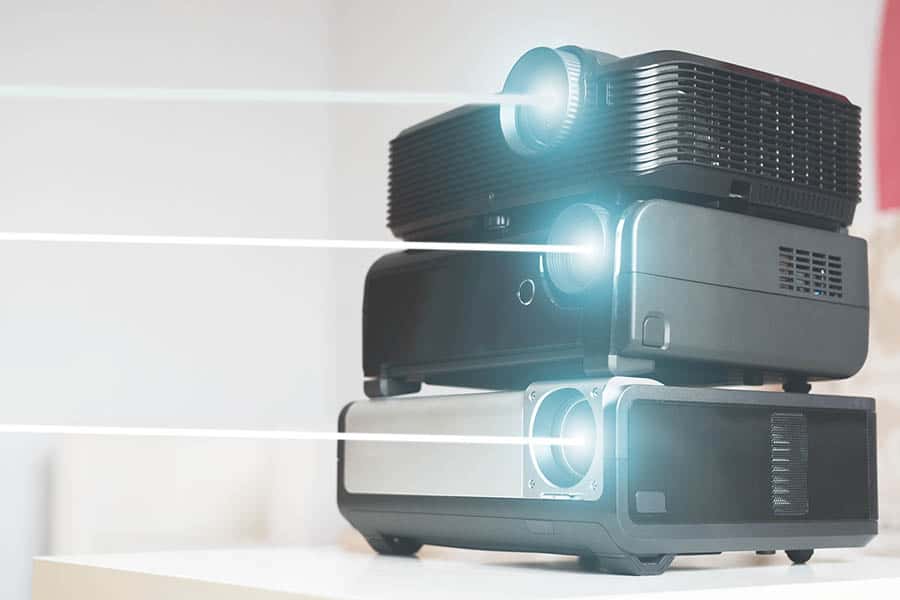 There’s a lot of hype around laser projectors, but not many people understand how they work. While the technical details around all the different projector specifications can get complicated (more on that here), the basic principles of how they operate are fairly simple.

Typically, a laser projector uses three lasers, one for each primary color, to project an image directly on the screen. Compared to traditional projectors, which use white light that is then filtered into colors, laser projectors are more energy efficient.

How Does a Laser Projector Work?

A laser projector uses a light source deflected off of a chip and magnified and focused by lenses to project an image on your screen. Unlike a standard projector, which projects white light through a color filter to generate the colors in your image, a laser projector uses laser light in primary colors, producing less wasted light.

How a Standard Projector Works

A standard projector uses a white light bulb to power the projection. This light is then passed through a color wheel–a spinning wheel with filters in each of the primary colors. This provides the red, green, and blue light that is projected onto your screen in rapid succession to blend into one image.

This means that two-thirds of the white light is “thrown away” when the light is filtered into primary colors. This filtered light then hits either a DLP, LCD, or LCoS chip to produce the colored images.

DLP, or digital light processing, uses tiny mirrors to reflect or deflect light to produce the lighted or darkened pixels in each color.

LCD passes the filtered light through a tiny liquid-crystal display that produces the images for each color to display, like a tiny version of what you’d find on a calculator.

The LCoS combines both of these technologies by laying a liquid-crystal display over a reflective layer of silicon (hence the name liquid-crystal over silicon) to give an improved contrast ratio. This filtered and shaped light is then passed through a series of lenses that magnify and focus the image for projection.

How a Laser Projector is Different 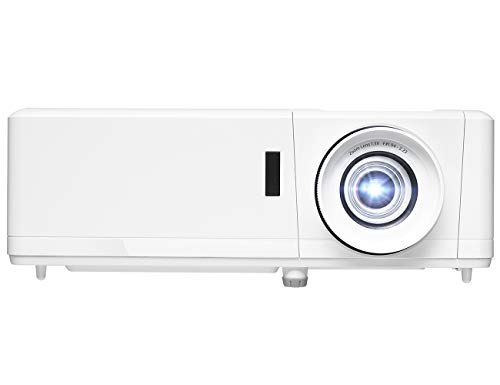 A laser project replaces the white light bulb with primary-colored lasers. This light is then diffused, hits a chip, and is magnified and focused by a series of lenses. The ideal system uses red, green, and blue lasers. However, true RGB models are very expensive. Instead, hybrid laser models that utilize blue laser light are more commonly available to consumers.

The hybrid models reduce the number of lasers from three to one laser. The light from this laser is split into two beams, with one beam converted into either green and yellow light. These three light beams are then combined in a lens and prism assembly which passes the light onto either a DLP, LCD, or LCoS chip, and then through lenses for magnification and focus.

Other models combine a blue laser with a red LED and use a phosphor to generate green light from the blue laser light. In every case, less light is wasted. The only light that’s produced is the light that’s needed, and because laser beams are focused in a single direction, no light is lost in transit.

This means that less energy is needed to produce the same picture. Not only does that mean less electricity wasted, but also less heat produced. Lasers also last longer than traditional lamp bulbs and don’t need time to warm up before projecting.

Pros and Cons of Laser Projectors

On the other hand, a laser projector will be larger and heavier than your standard projector, so if you use your projector inside but sometimes use it on the screen outside, you’ll have a harder time with a laser projector, moreover, if you are going to use a projector outside, ensure that it's bright enough because, as we explained in our guide, the brightness has to compete with the sun. Here are some pros and cons to look out for.

Energy Efficiency - One distinct advantage of laser projectors is that they only produce the light they need, so less energy is wasted on making light that gets filtered out. Also, because laser light is unidirectional, less light is lost in transit. Overall, this means lower power requirements, brighter images, and a projector that doesn’t get hot.

Start-Up - A laser projector has about the same start-up time as a standard television, which is to say that it comes on practically instantly. There's no warm-up time like with a traditional style projector.

Lifespan - Where standard projector lamps are expected to last around 2,000 hours, a laser projector lasts roughly ten times that at around 20,000, and sometimes it's hard to tell when it's about to die, which is why we've written a guide on it before. This often means that the higher cost of the projector is recouped over the lifetime of the projector when compared to a traditional model in which the bulb must be replaced.

Cost - One hurdle to getting a laser projector is cost. If you decide to get a laser projector, you can guarantee that you will be spending at least a grand. Laser projectors can be up to ten times more expensive than their standard projector cousins. And if you need a short-throw projector, like the LG HF85LA Ultra Short Throw Laser Projector (on Amazon), the cost is usually a bit higher.

Size - Another drawback to laser projectors is that they’re larger and heavier. This will make them more of a pain to move if you use your projector in more than one place. It will also mean fewer places that the projector can be placed.

What is the Lifespan of a Laser Projector?

And some models, like the Optoma HZ39HDR Laser Home Theater Projector (on Amazon), take this long life to an extreme, claiming as much as 30,000 hours of runtime.

Although some lasers are capable of burning things when highly concentrated (just like normal light can do with a magnifying glass), the laser light emitted from a projector is not capable of incinerating anything. Not only are the lasers themselves not capable of this, but further, the light is diffused inside the projector, making the beam even less concentrated.

Another risk with lasers is the possibility of damaging your vision. Like with the idea that lasers will burn everything, there is a common myth that laser light will make you go blind. It is possible, if you have a high-powered laser, to blind yourself with laser light.

However, most lasers available to consumers are capable of blinding only in very rare circumstances, and that includes the lasers coming from your projector. Further, the laser light is diffused before exiting your projector, making it less dangerous. That said, staring directly into any light isn’t good for your eyes.

How Expensive are Laser Projectors?

Any way you look at it, a laser projector is an investment. You can expect to spend upwards of one thousand dollars, and you can easily find yourself in the two to three thousand dollar range. This is quite a step up from standard projectors which can cost as little as a few hundred.

One other thing that will impact the cost of a laser projector is whether it is short-throw or long-throw (our guide). Because of the unique chips required to project the image and the graphics engine needed to convert the image into a trapezoid, short-throw projectors tend to be more expensive. If you have a smaller room, then, you should expect to have to pay more for your laser projector.

Are Laser Projectors Worth It?

Whether a laser projector is right for your home theater will depend on a number of factors. The many advantages you can get from a laser projector, including instant start-up, energy efficiency, and lifespan, may outweigh the cost.