The Home Theater DIY > Soundbar > How Does a Wireless Soundbar Work? 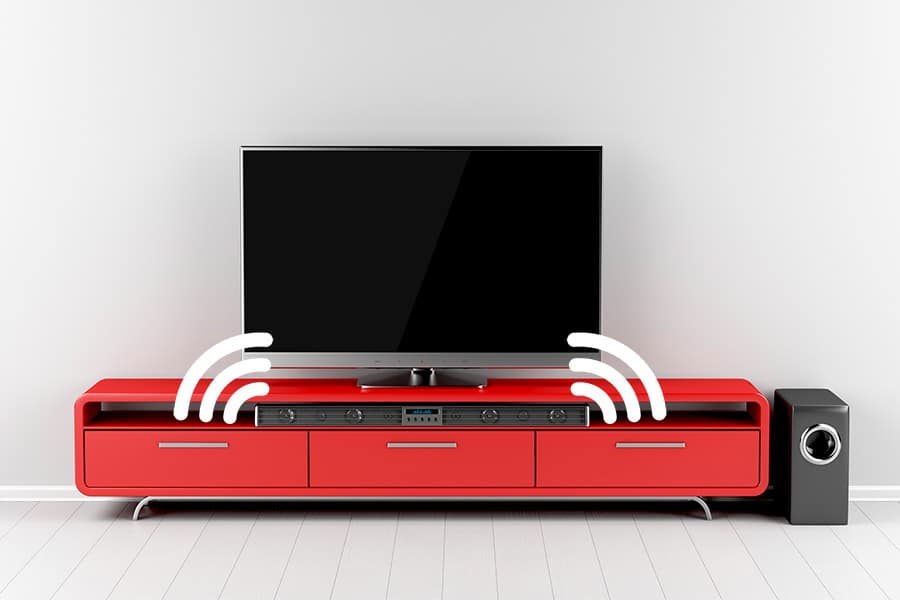 How Does a Wireless Soundbar Work?

So you want to cut those cables and hook up your soundbar wirelessly with WiFi or Bluetooth. But have you ever wondered how that works? Wireless technology is actually pretty easy to understand once you get the basics.

A wireless soundbar works by receiving bits of data called packets via radio wave (Wi-Fi or Bluetooth). The soundbar then sends a packet back confirming receipt of the packet and initiating a request for the next packet. This back and forth happens thousands of times per second. These packets are then translated by your soundbar back to an audio signal and sent to the soundbar's speakers.

Setting up a WiFi or Bluetooth connection to your soundbar isn’t that complicated. Once you figure out your device’s settings, hooking it up to your soundbar will become second nature to you. We’re going to walk you through how wireless technology works and then go into the specifics of hooking up your soundbar for Bluetooth or WiFi streaming.

How Does Wireless Technology Work?

From our internet connections to our cell phones to our radios, wireless signals are all around us. All of these technologies transmit their signals through radio waves on different frequencies.

Radios emit a low-frequency signal relative to cell phones, WiFi, and Bluetooth. Because of this, a radio’s range is much farther than other signals. This is good because having too many high-frequency radio signals in one area can cause interference.

The way that wireless signals work is by selecting a particular frequency, which is the number of waves that hit a particular point in a particular amount of time–usually a second. This signal is transmitted in pulses of radio waves to transmit data, sort of like how Morse code works.

How Wireless Technology Works with Soundbars

Radio waves are meant to be sent from what is known as a transmitter to what is called a receiver. In the case of a soundbar, the soundbar is the receiver (more on that in our guide) and the transmitter is whatever you’re playing music, movies, or shows from. The transmitter transforms an audio signal into a radio wave signal and the soundbar receives it and translates it back.

In order to make sure the receiver is getting the proper signal, the transmitter and the receiver have to agree on a particular frequency to send the signals with. This ensures that your device doesn’t play from multiple sources you don’t expect and that your soundbar doesn’t receive two sound signals at once.

Connecting to a Soundbar via Bluetooth

To ensure your soundbar and your device operate on the same frequency, Bluetooth requires a process known as “pairing.” To initiate a pairing, you must set the soundbar in discoverable mode. How to do this varies from device to device, but the principle is the same.

While your soundbar is in discoverable mode, you can select it from a list of available devices within range (about 30 feet). Once you select your soundbar, the devices are said to be “paired” and the device can now control the soundbar.

Almost all soundbars have Bluetooth functionality but a select few don’t. Still, it’s possible to get around this by buying a Bluetooth-to-3.5mm receiver and hooking it up to your soundbar’s audio jack. For more info on the different adapters, you can use for this sort of setup, check out our article on connecting a TV to a soundbar using Bluetooth.

How to Connect to a Soundbar via Bluetooth (Multiple Brands)

Since setting up your soundbar to be in discoverable mode differs from device to device (more on the difference between soundbars in our guide), we’ve prepared instructions for a few of the best-selling soundbar brands on Amazon:

Vizio soundbars come equipped with a special Bluetooth button on both the remote and the soundbar itself. Press and hold either of these buttons for five seconds. While in discoverable mode, the LED indicator lights will flash in a pattern. When you connect your TV to the soundbar, the led lights will stop flashing.

Bose soundbars vary from model to model but will either require you to press or press and hold the Bluetooth button until the LED indicator light flashes blue. This shows that the soundbar is in discoverable mode. When you connect your TV to the soundbar, the light will glow white and may or may not fade to black depending on your model. Consult your manual for specifics.

Streaming to a Soundbar via WiFi

Streaming to your soundbar via WiFi can be a little bit trickier than connecting using Bluetooth. Many soundbars have their own “casting” software that may or may not be compatible with whatever app you want to play audio through.

The ones that don’t have WiFi capability can usually be hooked up to a WiFi-to-3.5mm audio adapter. There are a number of brands that produce these adapters, and there are tons of reviews on YouTube to ensure you get the best one for your budget.

Connecting via WiFi is fairly different from soundbar to soundbar, so we’ve assembled a list of instructions for a few of the best-selling soundbar brands on Amazon:

Vizio soundbars vary as to whether or not they support WiFi streaming. For those that do, Vizio uses the SmartCast app. Simply download the app onto the device you want to stream from (your TV, your cell phone, etc.) and follow the on-screen prompts to set up an account. From there, you can find a list of all Vizio devices that you can send audio to. Simply select your soundbar, and you’re good to go!

Bose soundbars are controlled with WiFi through the Bose Music app. Simply download the app to the device you want to play audio from and follow the on-screen prompts to create an account. From here, bring up the My Bose screen and tap the + sign, and follow the on-screen prompts to add your soundbar. The soundbar’s light will pulse white while connecting to WiFi and will glow solid white and fade to black when connected.

Yamaha soundbars don’t all have WiFi capability, but of those that do, they use Yamaha’s MusicCast app. To activate it, press and hold the connect button for three seconds. This will make the soundbar emit a local WiFi hotspot. Connect your device to that WiFi network. You will be prompted to enter your home network name and password, so have that information handy. At this point, you can reconnect your device to your home network, and the soundbar should then appear in the MusicCast app.

Sonos has one soundbar model called the PlayBar. Like all Sonos wireless speaker products, the PlayBar streams from WiFi through its Sonos app. The app, unfortunately, has limited options for streaming sources and will not broadcast all sound coming from your device (for instance, it will not play from Google Music). To get around this, you can buy a WiFi-to-3.5mm audio adapter.

These instructions may seem complicated, but after the initial setup, streaming wirelessly in the future will be easy. With a little patience, you can ditch your wires and play audio from your TV or from your mobile device. Happy listening!

Now that most soundbars offer Bluetooth and sometimes Wi-Fi as sources for audio, cables are becoming less and less present, which is one reason why a future where you can play through Bluetooth and AUX at the same time (our how-to-guide) is unlikely, considering there probably won't be a need for it. Even newer televisions offer the ability to connect a soundbar via Bluetooth.

If you are having issues deciding on a soundbar, be sure to check out our article about the best soundbars for the money! We go extremely in-depth on the pros and cons of each soundbar and compare all of their specs against one another.