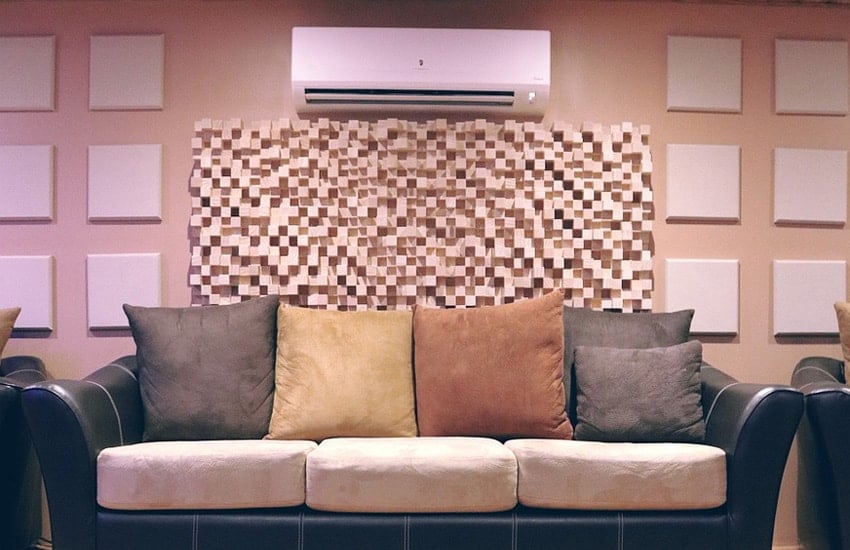 Why Acoustic Panels Are Important for Home Theaters

If you're all in on your home theater, you may be asking yourself what finishing touches you should put on. For some, acoustic panels are a way to give the experience an extra level of polish. If you've seen our guides on how acoustic panels work, and how effective they can be, you may have a good feeling for just how much they can enhance the experience.

Even if you’re not going for a full theater experience, any home theater will benefit from adding acoustic panels, and if you’re installing any sound system more sophisticated than a TV’s built-in speakers, acoustic panels will add more quality to the sound being produced.

There’s no need to break the bank though. You don’t need that many panels to notice a difference, and it’s possible to cover the basics with just a handful. Sure, you can cover the whole room, walls, and ceiling. For most people, the number of panels to get the job done is measured in the single digits, and modern panel designs make them easy on the eyes.

What is Reverberation and How Do You Control It?

Reverberation, or “reverb” for short, is what you hear in a room when sound is produced. There’s direct sound--the waves of sound in the air that go from the speaker to you directly--but the sound is propagated in a wave out in all directions from the source.

Because of that, it has a chance to bounce off all the surfaces in a room before it gets back to you. The sound from the speaker might come to you directly, but it also bounces off the ceiling and down to you, off the walls to your side and diagonal to you, off the wall behind you, etc.

You can think of it like an echo, but not exactly: an echo is when a sound is reflected with a delay that’s so long you recognize you’re hearing the same sound again. Reverb happens quickly, too fast to be an echo, so fast, in fact, that your brain hears the direct sound, the sound bouncing off the walls, and the sound bouncing off the ceiling at basically the same time.

It’s all one sound as far as your brain is concerned: the combined reverberation of the original sound signal all hitting you at once.

Why Acoustic Panels or Acoustic Foam are Important

With this explanation in your pocket, it’s probably a lot easier to understand what we’re doing when we put up acoustic panels. We put them on walls, and on the ceiling, specifically to disrupt these bouncing--reverberating--sound waves. We have a separate guide on how to place your panels, and how many you'll need, but the basics are pretty simple.

The different types of panels, absorbers, and deflectors, are there to make sure that the direct sound is all that gets to your ears. The reverberations are muffled or scattered away, and in that way, the acoustic panels act as a sort of audio shield between bounced sound waves and you.

Here is a great acoustic panel (on Amazon) that will work with most rooms. Acoustic panels run more expensive than acoustic foam (also on Amazon), but it's well worth it if you aren't too handy. There are some big differences between foam panels and acoustic panels, so be sure to check out our write-up on the differences.

And if you'd like to build your own panels, you buy acoustic foam in bulk, build your own frame around the foam, and cover it in a material that will match the room. We have guides on what types of insulation and what types of fabric covering are best for this, if it's something you're interested in.

Where Should Acoustic Panels be Placed?

So, if you’re going to put some of these up, where should you place them? Since it’s clear that we want to keep sounds from bouncing off surfaces and hitting you, we have to figure out where those angles are--where is sound going to be coming at you from, other than the speaker?

This sounds complicated, but it’s actually a pretty easy exercise. Have a seat in your theater room, and identify your main source of sound. This is the direct sound source, the speaker. Enlist a helper who can hold a mirror and move around the room for you, and have them start at the wall to your left or right, about at the middle of the room.

\With the mirror flat on the wall, at the level of your head (or wherever someone using the theater room’s head will be when sitting), move the mirror around until you can see the speaker in it. This is the direct line from the listeners head to the speaker when waves are bounced off the wall. The reason this works so easily is because light is a wave too, so we’re really using the mirror here to “decode” the reflection of the sound waves into something we can see.

Mark this spot on the wall, maybe using painters tape or a nail, and do the same thing on the opposite side. Get a ladder, and perform the same exercise for the ceiling.

Once you have those points identified, congratulations: these are the most critical points to put up acoustic panels. Diffusers and absorbers have their pros and cons, but for the purposes of this conversation, you typically put diffusers on the walls and absorbers on the ceiling. You probably want a larger square panel for the ceiling and vertical panels for the wall.

But what if you want even better sound quality? The process outlined above is easy to repeat, and so you should use it to focus on other areas of the room now. For instance, directly behind you, where sound is going to be projected back toward the speaker, is an easy option.

Adding more panels on the ceiling is a good call too, but probably not as useful as more wall panels. Additional wall panels might be placed equally as far back as the ones in front of the listener’s position are placed forward, and if the room is tight you might not need any more at all. If you are considering ceiling panels, be sure to check out our guide on how to install them.

Lastly, edge areas, like corners and behind the speakers, can also use a few panels, but if you’re adding this many you’re getting close to a studio quality setup and probably aren’t going to be able to tell the difference in plain old movie audio. More on that in the next section.

One caveat to the discussion above is that there are some sound waves, the deeper ones, that have such long wavelengths they really don’t behave in a nice, ricochet way. Because these sounds have so much more energy, scattering doesn’t do us much good, and absorbing is tough with a normal absorbing panel.

To address this, special acoustic panels called bass traps (on Amazon) are used to do just what they say: trap the bass. These go in the corners of a room, usually three of them in each direction, anchored by a simple square foam block.

Their design is such that the signal from lower tones is trapped within by getting “caught” in the ridges of the panel, bouncing forever until the energy has been dissipated but, importantly, not bouncing back out to you. For the typical setup, these are going to get you only a marginal gain, so I’d advise doing the rest of the room first and seeing if you really need these before ordering.

How Do Sound Panels Work?

Since you already know sound is a wave, and that it bounces around like a wave, it should be clear that we can control that “bouncing” with an acoustic panel. But how? The answer is by the design of the surface of the panel. If you look at a diffusing acoustic panel, it’s rounded on the outside. This roundness allows us to “bounce” a sound in all directions.

That’s useful in this case because a signal that would be coming at you in a straight line (bounce off the wall for instance) is now spread out so that it comes at you in a sort circular wave. The energy of it is spread out across that curve, and so though the reverb is still bouncing off, the diffuser panel has spread its energy out so that it’s harder to hear.

Absorbing panels are like the bass trap panels but toned down a little. They may be covered with a smooth fabric or saw-toothed into ridges, but either way they are using the nature of sound against it, letting the sound enter but not leave based on the geometry of the surface. And the size matters too (our guide) - typically, the bigger the panel, the better performance will be.

Will acoustic panels keep sound out?

Not really, or at least that’s not what they’re designed for. If you cover an entire wall in sound dampening foam, it’s going to have some effect on sound coming from the other side, but the “active sites” on the panels--the ones designed to absorb or scatter sound--are one-directional.

They’re not going to help out with sound coming through them past whatever an equivalent amount of non-geometrically-special foam would. If this is a real problem for you, you might consider installing panels facing the sound in the room that it’s coming from. You may be able to hang up sound dampening panels inside a room facing out. That, in theory, would reduce sound coming in through the wall, but this is uncharted territory.

So, hopefully, this gives you enough background to make an informed decision on whether or not you should try putting acoustic panels in your theater room. If you do, remember you can always start small and expand later--you don’t have to coat all the walls and ceilings in panels to get a nice, crisp effect from your sound system.

Sound acoustics can get very confusing. There are tons of different factors that affect how sounds bounce around inside of a room. Here's an article on home theater room dimensions that goes in-depth on the acoustics for different sized rooms.