An HDMI switch allows you to feed multiple HDMI sources – whether mini, micro, or standard (our guide on the differences) – to a single output. It will allow you to select between the input channels and will likely come with a remote control. HDMI switches are a great way to enable older equipment with fewer HDMI inputs to accept more devices without constant unplugging and replugging.

An HDMI switch is a tool to manage multiple devices on displays with only one HDMI input. Although they don’t offer the same sound conditioning of an A/V receiver, in combination with a power amplifier an HDMI switch offers the same basic functionality that an A/V receiver would.

This configuration is not a perfect substitute for an A/V receiver, however. You won’t get the same sound conditioning from your display device’s internal preamp that you would get in the preamplification stage of an A/V receiver, and you won’t be able to take advantage of consumer electronic control (CEC) which allows you to control all of your devices with one remote.

How Does an HDMI Switch Work? 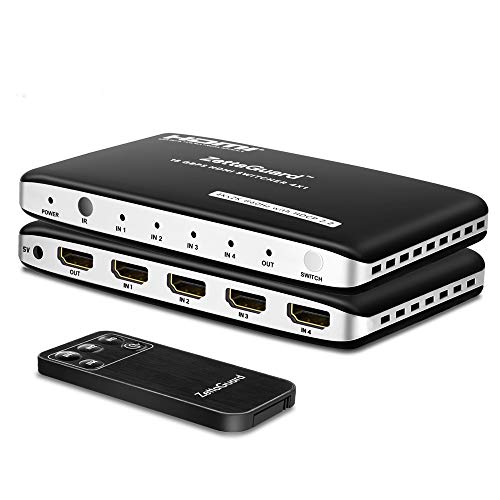 An HDMI switch allows you to route two or more HDMI source channels into a single channel. An HDMI switch is a simple way to expand the number of inputs a device (usually a television) can accept. Your TV is set to the only input source and, you use the HDMI switch to replace your TV’s input selector.

An HDMI cable has 19 wire pairs that terminate in 19 pins on the HDMI plug. Each of these pins communicate different information not only about picture and sound, but also device information, playback controls, and clock settings. In an HDMI switch, the signals from these 19 wire pairs are routed to the corresponding pins of the output signal.

Since mixing two or more overlapping signals may cause harmful interference and signal overloads, an HDMI switch selects signals from one input source at a time. Although this could theoretically be a mechanical process, almost all HDMI switches are powered to enable the use of a remote control.

Usually, these are simple devices, like the Techole 4k HDMI Splitter (on Amazon) which only allows management of two inputs. But there are more robust units, like the Zettaguard 4k 60Hz 4×1 HDMI Switcher (Amazon) that aim to be more of a final solution to your input management needs.

Does an HDMI Switch Replace an A/V Receiver?

Yes, an HDMI switch replaces one of the core functions of an A/V receiver, but any home theater nerd can tell you that A/V receivers do way more than operating as a switchboard between your devices.

Most importantly, an HDMI switch will not allow you to connect auxiliary speakers to it the way an A/V receiver will, additionally, A/V receivers can handle iPhone connections which we explained in our tutorial. If you intend to use your TV’s on-board speakers, or if you intend to output audio from your TV to a power amp, you can avoid using an A/V receiver. However, you won’t get the all-in-one sound conditioning and efficient signal management you would get from an A/V receiver.

When Would You Use an HDMI Switch?

In all likelihood, an HDMI switch is not going to be part of a home entertainment system you design from scratch. What is more often the case is that an HDMI switch allows you to build out the connection capability of otherwise inadequate equipment.

That is, an HDMI switch should be thought of as a patch to improve a substandard home entertainment arrangement, not a substitute for more expensive equipment.

The most common application of an HDMI switch is when you have a device with only one HDMI input but you want to use multiple HDMI devices. Without an HDMI switch, you would have to upgrade to an A/V receiver. This may be more than what you want if you are not using external speakers.

An HDMI switch is significantly smaller and less expensive than an A/V receiver. If you want a lightweight solution for connecting multiple devices to a single input TV, an HDMI switch can be a good way to go.

However, integrating new devices into your home entertainment system is a great opportunity to upgrade and streamline your system, which an HDMI switch will not do.

When Would You Use an A/V Receiver Instead of an HDMI Switch?

If you want to set up a robust home theater system, you will likely want to use an A/V receiver. For more on what I mean by a “robust home theater system”, here’s a guide to the main components. An A/V receiver is an all-in-one solution to connect all of your devices. It enables you to route sound directly to a set of speakers, and to route picture to your display device, and it manages this for a variety of different inputs.

Unlike an HDMI switch, an A/V receiver will allow you to optimize your image and sound quality (and here’s a little on how they do that). It also provides both pre-amplification and power amplification, balancing your sound and then powering it to drive a speaker system.

If your equipment is capable of using consumer electronics control (CEC), you can use the remote for one of your devices to control all of your devices. You would not be able to do this easily with an HDMI switch and would have to set it up every time if your system devices aren’t universally capable of HDMI eARC.

In general, if you are choosing between an A/V receiver and an HDMI switch, there are few reasons you would want to go with an HDMI switch. As far as quality and convenience of use are concerned, A/V receivers beat HDMI switches every time.

Ultimately, an HDMI switch is a cheap alternative to solutions that would mean significantly upgrading your home theater system. If you aren’t looking to make a significant upgrade to your system, an HDMI switch may be sufficient for your purposes.

Hi! My TV only has one HDMI port, and I’m using it for an Amazon Firestick. I’m interested in getting external speakers, but I’m not sure how I’d connect them to my TV- as my TV has an HDMI, a USB port, and nothing else that would be able to connect to a speaker as far as I know. Could I use an HDMI switch, plug it into my TV and plug my Firestick and a cable for my speaker into the switch? Obviously, I’d want to use both the Firestick and the speaker at the same time. Thanks!

As a recent Sonos/airplay 2 5.1 channel owner, I have been wondering why I need my Denon AVR? If I keep all my input equipment in my data closet could I not just use an auto input HDMI switch to handle all my video/audio signals to my TV which sends all my audio via HDMI Arc to my Sonos Beam?