If you want to connect another gaming device to your TV, but have only one HDMI port, it can be a frustrating problem. You don’t want to swap out HDMI cables every time you play a game, so there must be an easier solution. Thankfully, HDMI splitters and switches – which we’ve talked about elsewhere before – will help you get over your lack of HDMI ports, however, many people confuse the two.

HDMI splitters vs HDMI switches, what’s the difference? An HDMI splitter accepts an HDMI input, then duplicates and sends that signal to multiple outputs. An HDMI switch accepts multiple HDMI inputs, then allows you to select which signal is sent to a single output.

If you still aren’t sure which solution would work best for you, here’s everything you need to know about HDMI splitters and HDMI switches.

How Does an HDMI Splitter Work?

An HDMI splitter (on Amazon) is a fairly simple piece of technology with an intuitive design. It can take almost any incoming HDMI signal and simultaneously send it to multiple HDMI outputs. There are two types of HDMI splitters, active and passive, and both require you to add cables for the devices you are outputting the source to. For more on active and passive splitters, check out our other article.

As we suggested already in our guide, most setups work fine with passive HDMI splitters, but if your cables are longer or you have multiple devices, you might need the added power from an active one. The way a passive HDMI splitter works is simple. There are 19 pairs of wires in an HDMI cable that corresponds with the number of pins on the HDMI connector.

Each wire sends data electronically which includes audio and visual information. The HDMI wires also transmit information about the remote control and other commands, along with data on connected devices. The splitter duplicates the wires, so you have multiple sets that transmit signals to the corresponding HDMI jacks. You can connect multiple devices, even if there aren’t enough HDMI ports.

If you have longer cables and need additional power, it’s better to use an active HDMI splitter. Adding more power to the HDMI signal typically means using a power outlet which means you’ll use a transistor to pass the original signal to the connected device. Not only will it increase the power that can be lost due to splitting, but it can also reduce interference.

When to Use an Active HDMI Splitter

Adding more power to the HDMI signal typically means using a power outlet. You’ll use a transistor to pass the original signal to the connected device. As it was noted above already, this will increase the power and can also reduce interference. Active HDMI splitters are better for not only longer cables but for sending the signal across multiple devices.

There are a few downsides to using HDMI splitters. For instance, you are weakening the signal when it’s split, and this can lead to lower quality audio and visual. It also can’t be done more than twice unless you use an active HDMI splitter. Contrast this to an active HDMI splitter which will reduce the risk for signal interference, even from radio frequencies.

When there’s a problem with radio interference the audio will sound choppy and you’ll see green and red dots on the screen. If the issue is persistent, even if you’re using an active HDMI splitter with a short cable, you’ll need to switch to an HDMI shielded cable to deflect the radio waves.  HDMI shielded cables are more expensive but usually come with either a carbon allotrope or metal alloy coating.

How Does an HDMI Switch Work? 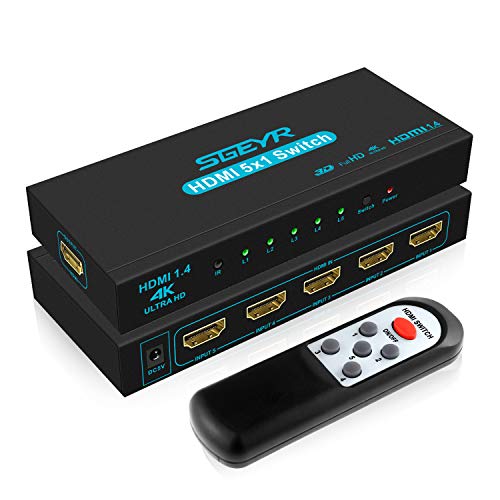 When you want to plug multiple devices into the single HDMI port on the TV, you will quickly learn that you need additional inputs, and this is what makes HDMI switches so useful. An HDMI switch is a simple device that allows multiple devices to receive the signal from the TV’s one input and then send those signals out to different channels.

While there are several types of HDMI switches, the only difference is the number of devices that can be connected. The most popular ones can switch between three devices. Thankfully, setting up an HDMI switch isn’t difficult. The hardest step is knowing where to place it, but if you are finding it challenging, we have more information in our guide.

The switch must be able to plug into the power outlet and the TV’s HDMI port, moreover, it also has to be in reach of your devices. After you plug the switch into an electrical outlet, connect your devices’ HDMI cables to the ports on the switch. If your switch has pre-labeled ports for DVD players, gaming consoles, etc, you want to connect those devices to the corresponding inputs.

Finally, connect the HDMI cable from the switch to the corresponding one on the TV. You’ll need to set up the devices so that the channel each one is connected to corresponds to the proper port on the switch. Once this has been completed, you should have clear audio and video and the process is finished.

Even though an HDMI switch is very useful, they can have some drawbacks. For instance, it isn’t compatible with all devices, especially those that are left turned on, in fact, the HDMI switch may not recognize it. Often, a device needs to be turned on and off for the HDMI switch to transmit the signal properly.

Another problem is that you can also lose image quality with some connected devices. In other words, the HDMI switch often won’t display images in high-definition. You’ll still be able to watch DVDs, Bluray, and play games with sufficient quality, but the details won’t be as sharp and clear as you would hope.

When Should You Use an HDMI Splitter or HDMI Switch? 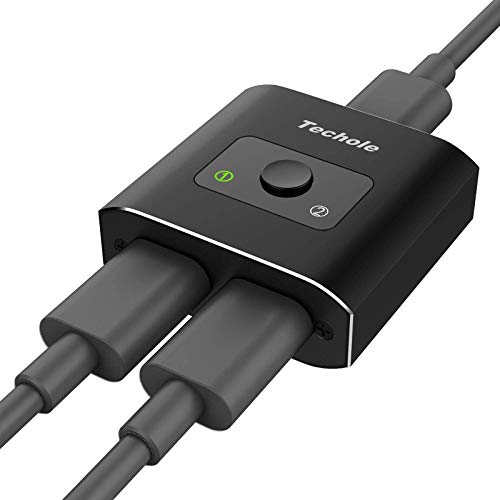 There are times when you want to use an HDMI splitter, and others when an HDMI switch will work best. Sometimes, it will depend on the number of devices you want to connect to your television’s HDMI port and other times on image quality. Another factor is the price, with some HDMI switches going at a higher price than splitters.

When to Use an HDMI Splitter

If you only want to connect a couple of devices or need to use longer cables, an HDMI splitter is often your best option. Once everything is connected, you can easily switch the HDMI source that matches the device. An HDMI splitter is also recommended when you want to send a signal to multiple TVs. Explained another way, it will let you watch the same programming regardless of the room the TV is in.

When interference is a problem due to long cables or you need to connect more than two devices, using an active HDMI splitter instead of a passive one will ensure that your audio and visual are crystal clear. If you recall what was explained earlier in the article, active HDMI splitters have more power to send the signal a longer distance.

When to Use an HDMI Switch

If you want to connect multiple devices to one TV, like a soundbar, gaming console, DVD, and CD players, you want to use an HDMI switch. You will have plenty of ports to connect your devices and you’ll also have the advantage of not worrying about technological advancements that could cause problems with interference or image degradation.

Most HDMI switches can keep up with changes in technology, which means you don’t have to worry about replacing the switch each time you add a new device. Everything should work seamlessly after you’ve finished the setup process. HDMI switches are also better at blocking interference so you get sharp and clear images.

Only having one or two HDMI ports and multiple devices to connect is a common problem for many people. You could connect a device every time you want to use it, but this isn’t recommended because constantly connecting and unplugging devices can damage the HDMI ports. A much better solution is to use either an HDMI splitter or an HDMI switch.

Both will allow you to connect multiple devices, even if there aren’t enough ports on the TV. Which one is best for you will depend on a few factors. Think about if you want to see the same programming on different TVs or if picture quality and multiple devices connected is more important. Once you can answer that, you’ll know which is the best option for you.

I have tried to use a Blu-Ray play in the 3rd port but it won't work, can hear it playing away but no image or sound. When I connect the Blu-Ray devise directly to the PC monitor ( disconnect from the splitter and connect to the HDMI port) it works beautifully !

Would a switch be better in this instance maybe ?

Thansk for your help.

Thank you, I completely understood what you were talking about...

Question- can splitters be used for networking, say 4 laptops. If a folder with multiple files is shared, can the laptops connected work on separate files in the folder? Thanks