I am a big fan of relaxing at home and enjoying modern technology. In other words, relaxing on the couch binge watching Netflix shows or playing games on my PS4 has become one of my favorite past times. As with thousands of other Americans, I invested in a Soundbar to help enhance my viewing experience. However, when I first hooked up my home theater, I noticed a lag. If you are like me, lag is beyond aggravating, even when the sound is just a few seconds off.

So how do you fix lag between a Soundbar and a TV?

Fixing lag does not have to mean you have to return your devices or pay for expensive technical support calls. Below, I list some of the most common fixes you try from the comfort of your home.

Lag can stem from a variety of issues. Below, I take a look at several things you can do to help reduce or eliminate any lag between your television and Soundbar.

Your television itself may cause some syncing issues between the video you see and the audio coming from your Soundbar. I recommended you check your television’s setting first as it may eliminate the lag immediately.

First, to check to see if the TV is the issue, find a media source that you know does not have an audio issue. This may be a new Blu-ray disc, YouTube video you watch often, or other source you are certain has no issues. Once you have your audio and video source material, disconnect your Soundbar from the TV or disable it. Play your source media, relying only on your television’s built in speakers.

If you notice inconsistencies, you know that your television itself is the source of the lag. Some televisions, like a Samsung TV, may have an audio reset option. Often found in your settings menu, this can allow you to reset the television’s audio signal and hopefully get rid of that lag.

Finally, smart TVs occasionally require firmware updates. Failure to correctly install these in a timely manner can lead to lag issues. If this is the case, update your television’s firmware as specified by the manufacturer.

If you have ever had to call tech support for any electronic device, you know the first question they will ask. “Have you tried turning the device off and back on again?” This is actually where you start if you think the Soundbar may be the issue. Disconnect your Soundbar from the television and turn the device off. Allow the Soundbar to rest for a few moments before reconnecting it and turning it back on.

Have you checked your connecting cables? Sometimes, these cables can come loose. This is particularly true with HDMI cables, which can be bumped or disconnected when you move your devices around. Check to see if your cables are fully inserted into their respective slots. Kinks in the cable can also cause issues so make sure they are untangled and uncoiled. HDMI cables also include “handshake” capabilities. This means they relay copy protection data, device capabilities and restrictions, and component type information between your connected electronics. If the cord has become damaged, it may not properly relay this information. At the same time, if your devices are not compatible – the cables may be unable to relay the required information.

In all likelihood, your television, Soundbar, and source each have settings you can control. Sometimes, properly aligning these settings takes some finesse, but eliminates the lag. Let’s take a look at the most common:

Evaluate Your Component Set Up

Improperly connecting your components can cause lag as well. A component set up is one that includes your television, source media and a Soundbar. (I also call if a simple home theater set up.) Recognizing the right way to connect these devices is not always obvious. In fact, the first time I set up my own simple home theater, I experienced lag due to the improper order of connectivity. I assumed you connected the source (Blu-ray player) to my television with an HDMI cable.

Then, I connected my Soundbar to my TV with another HDMI cable (as an aside, you can connect receivers and TVs without HDMI cables which we explored in our guide). This caused a noticeable lag. The correct way to connect a source, TV, and a Soundbar is different. The source should be connected to your Soundbar via the HDMI In port. The Soundbar should then be connected to the TV. After correcting this, I found that it completely eliminated my lag issues.

Understanding the Basics: The Television and Soundbar Connection

According to the most recent Nielsen Report, adults in the United States spend roughly 6 hours every day watching videos. Television, whether being watched live or time-shifted, stills accounts for the majority of this time – up to 4 hours and 46 minutes daily!  (Other media sources include devices like tablets, computers, and smartphones. Each of these devices, however, can be connected to your home theater system through various means so they can no longer be discounted from the time-spent sitting in front of the TV.) With statistics like that – it is no wonder why so many Americans are looking to invest in their home theater system. For many, a full, surround sound system comes with a hefty cost that may not be an affordable option. That is where a Soundbar comes in. 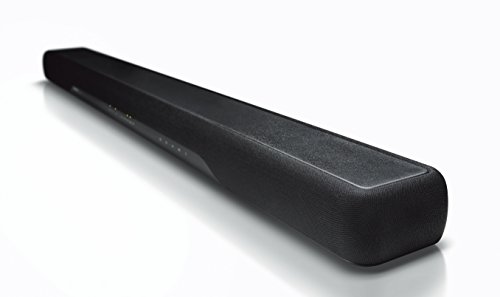 The speakers included on televisions today are sub-par at best. Given the increasingly flattened profiles of the modern TV, the built-in speakers can leave much to be desired. To achieve quality sound without having to invest in a full home theater system, manufacturers have been steadily investing time and efforts into developing and marketing Soundbars.

Soundbars are thin, modern devices that pack a punch when it comes to sound. They are all-in-one multi-speaker devices that give users a centrally located, single bar audio system. Depending on the brand, these Soundbars can boost your home theater audio without costing a fortune. (You can check out my buyer’s guide for some of the best Soundbar options available today.)

You should consider several things before you invest in a Soundbar. These include:

Finding the right Soundbar for you can change your entire television experience. In fact, your Soundbar should be sized in accordance with the size of your television as well. We also go over this in the soundbar buyer’s guide.

Connectivity: Cabling Options For Connecting Your Television and Soundbar

There are many different ways you can connect your Soundbar to your TV. Auxiliary, RCA, digital optical, and fiber option inputs are standard on almost all Soundbars. However, high definition multimedia interface (HDMI) cables are becoming the most popular option. HDMI cables relay both video and audio signals to and from your devices, making it a universal connector. HDMI is also capable of relaying these signals extremely fast – making it one of the better choices to help decrease potential lag from the very start. Whatever your choice, however, make sure both your television and Soundbar are able to connect. For example, older televisions will likely lack HDMI cable ports.

My device only lags with Netflix. Is this fixable? Sometimes, it is not the internet, device or connection cable. Sometimes, the lag stems from the streaming service itself. One way to test if your streaming service is the issue is to watch a different show or movie on the same platform. If the issue only occurs with a single show or movie, then the streaming service may have a poorly synced video loaded on their end. While this means your movie or show will likely be lagging throughout the entire duration, at least your devices, cables, and internet are not to blame! The solution: find a new show.

My tv is lagging and I have a Samsung soundbar connected but this is not the issue as it still lags when the soundbar is not connected. Please help!

Cox cable is unable to fix latency n even when sound bar is not connected. Now they suggest it could be my electric circuit in my home wiring. Should I buy a power conditioner?

If you use plain HDMI cables to test the audio lag , And the audio comes through without any enhancements but with no lag.. then I plug in the arch cables Into my smart Samsung TV , and the audio leg starts again, is it my TV or is it my new Samsung sound bar has something wrong with it. I’ve only had it two days… Help thank you

My problem is that the picture is on front of my audio, and in all ways of connected !!! I have send it to JBL, and they sand it back, nothing don on it, so problem not solved. Its inpossible to push sound thats behind the picture ! I have no options to delay the picture...

How to solve this ??

PS i have tryed HDMI via ARC, Fibre, and its all the same problem