Needing to extend connections is a common problem, which is why things like IR repeaters (our guide) are needed. For a simple living room setup, there’s probably no need to look into exotic options for signal transfer. Everything is close to everything else, and the 10ft HDMI cable that came with your TV will do just fine. However, for more advanced setups like those using a projector, or where equipment is far away from the screen, you may need to look into extending the length of your HDMI cables.

The most common ways to extend the length of HDMI cables is by using an HDMI Balun kit, also known as an HDMI Extender. With an HDMI Balun kit, you simply plug your HDMI source into a base station which then converts the signal to be carried by an Ethernet cable, and converts back to HDMI at the destination.

This solution isn’t for everyone. After all, there are HDMI wireless converters that do the same thing without adding another cable to run. But, there are some cases where wireless HDMI just won’t cut it and a proper extender kit is the way to go. If you know a Balun kit is the right solution for you, you’re probably wondering what’s involved in setting it up.

Steps to Setting a Balun Kit Up 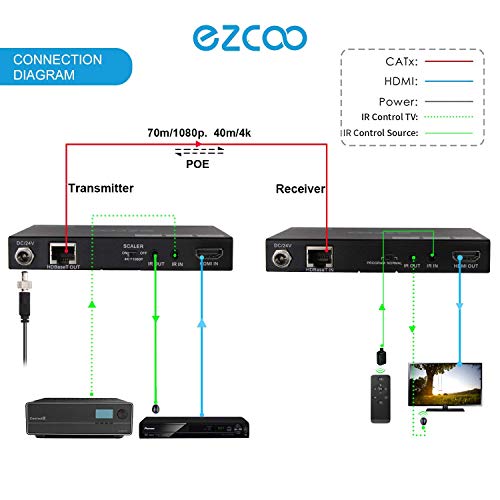 So you’re ready to use an HDMI Balun kit on your system. What are the steps? How do you actually get it up and running? Well, consider a typical entry-level kit, the one mentioned above: the EZCOO HDMI 2.0 Extender. You’ll notice there is a base station and a receiver. That’s pretty straight forward. And each of those stations will need a power source as well.

That makes sense: they’re doing a computationally heavy task, converting a live HDMI stream to something that’ll transfer over a Cat cable (aka an Ethernet cable, more on that later) on one end, and converting it back on the other end. HDMI technology, however. can deteriorate over time, but it’s not always obvious when they’re about to break down (unless you’ve read our guide).

The actually “extending” of the cable happens between these two stations: you have to choose your base station location, and where you’re going to put the receiver, and then the game becomes to get a Cat cable from one to the other. You can run this through your ceiling, walls, or even get clever and hide it in custom pieces of trim, but it’s got to get from A to B somehow.

Once your Cat cable is connected at both ends, the rest should be more or less automatic. If the base stations have power, and they have a signal coming in one end, it’ll be flowing out the other, where an HDMI cable connects to the receiver to take the signal the last leg of the journey, to the screen.

However, if you’ve read this far and you’re not sure that running another cable is a “solution” to you (after all, in some ways it sounds like more work), you might want to consider Wireless HDMI.

There’s a certain elegance to going cable free. After all those years hoarding extra cables, worrying one day you’ll need one that you threw away, it’s a strange feeling when you realize you might be able to get a wireless kit that replaces a whole category of them.

But there are no free lunches. Wireless HDMI really shines when you want a clean setup, or when your projector or screen are nowhere near your content sources, but there are some drawbacks.

First, if you have a really nice projector or 4k screen that you’re trying to get your content to, then Wireless HDMI kits quickly become very expensive. Even entry-level equipment like the SIIG 4K Wireless HDMI Extender starts at around $250.

Compare that to a typical HDMI Balun kit, the EZCOO HDMI 2.0 Extender that comes in at only around $150. It’s clear that, if you have a lot of high-quality content to send to your screen, an HDMI Balun kit might be the right option for you.

Wireless HDMI also starts to show it’s weaknesses when you begin to think about doing any gaming. Any wireless system – even if you’ve followed our best guides – will be subject to lag and interference that just isn’t an issue with an HDMI Balun kit.

The fact that you are using cables from end to end means that the signal isn’t dependent on what other wireless signals may be trying to compete with it. So, in the case of gaming, or any situation where a little lag can’t be tolerated, HDMI Balun kits outshine Wireless HDMI handily.

When Do You Need A Balun Kit? 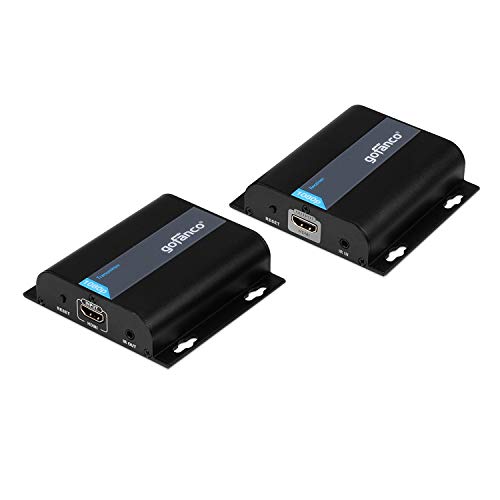 First, if you’re covering a significant amount of distance, say over 100ft, you really should go straight to using a Balun kit. There are wireless options that claim to cover that range, but in reality, the environment and other wireless signals wreck havoc on the WiFi signals, and they do it as a function of distance.

Going from a wireless transmission of 10 feet to 20 feet probably doesn’t double the chance of interference, it probably multiplies it several times because the signal is getting weaker further away and is subject to more instances of interference, bouncing off walls, etc.

And if you’re doing any kind of video-editing or, as mentioned above, serious gaming, then the Balun kit should be your first option. This goes for high-quality video content as well. If you’re streaming content that is very high end and has Dolby Atmos sound, you basically have to use a Balun kit to get your money’s worth.

It’s one of those up-front investments of your time and energy that will pay dividends down the line. Running the Ethernet cable isn’t so bad, really, especially for the quality you get, although, you should make sure you’re taking proper care of it using our tips.

A Note on Cables Used in Balun Kits

It seems like every new home theater technique comes with its own special trivia and arcane knowledge, and with HDMI Balun kits that trend is alive and well once you start to notice that every unit seems to call out several standards of Cat cables.

You’ll see “Cat5e/Cat6e”, “Cat6e/7”, “CAT5”, etc. The long story short here is, any Ethernet cable you have lying around is probably going to do the job, but you should check to see what Cat generation it is, and you shouldn’t hesitate to fork over a few bucks for the most modern iteration.

And just so we know what we’re talking about, Cat 5 is short for “Category 5”, the not-too-catchy name that the American National Standards Institute (ANSI) gave to a type of cable made of twisted pairs that became the industry standard. As time has moved on, Category 6, 7, and even 8 have come along, all with their own standards which generally are backward compatible with Cat 5, but have advancements in shielding, data transfer rates, etc.

Now that you know more than you probably ever wanted to about standard cable naming, you’re prepared to make the right decision when it comes to the cable that actually extends you HDMI: cross-reference with your HDMI Balun kit which standards it’s compatible with, and don’t be afraid to use what you have lying around to test the unit out. It’s not going to break anything. But, for advanced uses like Dolby Atmos and very high streaming rates (like to a 4k projector), you’ll probably want to buy a new Cat cable.

One last wrinkle with HDMI Balun kits, and all forms of HDMI Extension really (including wireless HDMI) is how to manage remote controls. You know, the remote that came with your cable box.

Well, these remote controls work by sending an IR–infrared–signal, and that signal has to have line of sight to the cable box. Even if you don’t have a cable box, this same problem applies to any hardware you’re running that came with its own remote, and so if you’re setup is advanced enough to require an HDMI Balun kit, the odds are you have a remote or two that you’re going to need to use.

Luckily, the industry is already there with a solution. HDMI Balun kits typically ship with infrared extenders, which piggy back the infrared signal on that same Ethernet cable used to stream video content.

However, the infrared signal goes the other way–back to the base station–so that you can run a small infrared receiver from the HDMI Balun kit screen-side, and that will transmit any infrared signals back to the transmitter.

So, now you probably know enough to approach these HDMI Balun kits as a solution for your setup. If you’re streaming very high-quality content, at or above 4k, and with Dolby Atmos sound, there’s really no way to get around using a nice HDMI Balun kit. Luckily, a “nice” kit here doesn’t mean anything more than the roughly $150 EZCOO HDMI 2.0 Extender listed above.

In fact, if you don’t need a kit that can carry 4k, you can even get away with a sub-$100 unit like the DTECH 100m HDMI Extender, which even comes with an IR extender at the low low price point of $60. You’ll only get 1080p out of it, but the beauty of Balun kits is, once you have the cable run, you can upgrade the kit later if you need to without being forced to run the cable again (as long as you use one of the more advanced Cat generations).

These kits give you options when your space is unique, or when you’re running a projector, or for any number of other reasons that the standard HDMI cable that came with your TV just won’t cut it for.

I have my tv in my family room(smart tv) and then speakers recessed into the ceiling. However, my receiver and the speaker wire drop down into my tech closet on the other side of the house. This is where all the Ethernet jacks are. I want to use the smart tv function but have the sound routed through my receiver. Can hdmi balun get that accomplished?

nice article - question: with the ethernet ports on all the new TVs - would you even need to convert the signal back to HDMI - or is the signal not able to be interpreted without the conversion back to HDMI? (would save 1 conversion box?)

I'm educated greatly. The distance I need to cover is 30 feet. Which device will you recommend.

Thank you, I am learning a great deal from your comprehensive explanation, must read one more time to understand more fully as a am a beginner. Is there any way I can extent my HTMI cables one foot or two, without a Balun kit? Maybe, a compatible linking htmi cable to achieve the short distance I need?