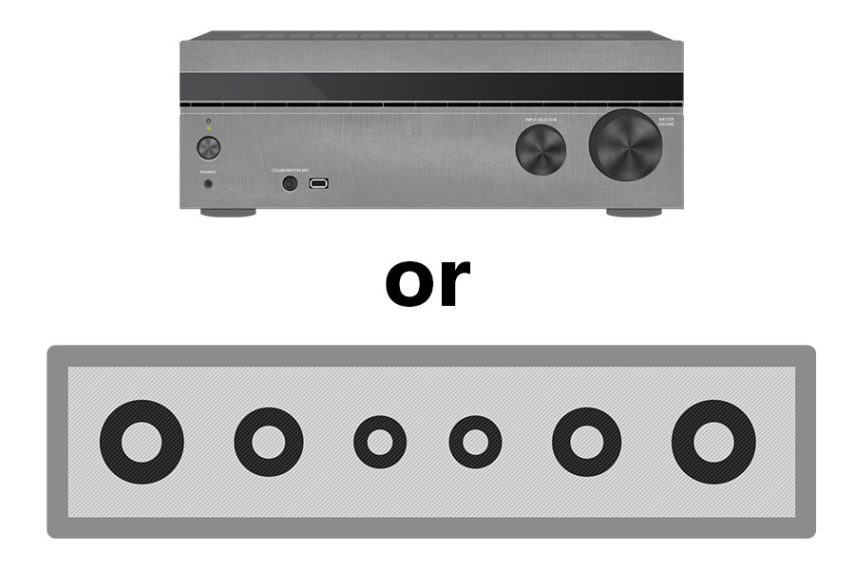 It isn’t unusual for someone to need to downsize their sound system to a soundbar setup, or for someone to start their setup by purchasing a soundbar. When looking at a usual home theater setup, you usually use a receiver. A receiver takes audio and video information from your home theater equipment, processes it, and then appropriately conveys this information to the equipment necessary. They can process surround sound properties and digital sound features.

While this seems pretty cut and dry, there is a lot to think about before replacing a receiver with a soundbar. Downsizing your setup to an all in one soundbar setup is very advantageous but most home theater enthusiasts will suggest just using a normal receiver with surround sound speakers. There are a lot of pros and cons to using your active soundbar instead of a receiver, I will explain how replacing the receiver works and all of these advantages and disadvantages.

How Exactly Does a Soundbar Replace a Receiver?

Active soundbars are a type of soundbar that has a built-in surround sound processor that acts as a receiver and amplifier. This means that a soundbar is self-contained and doesn’t need any extra hardware to properly function and process sound like most full surround sound setups do. This also cuts down on bulk and means you have a hide a dramatically lower number of wires in your home theater setup.

When setting up an active soundbar, all you have to do is connect it to the television through the component outlet, and turn it on. This is the best solution for someone who isn’t satisfied with just their television’s sound but also doesn’t have space for a full surround sound setup in their room. A good example of this is in a small apartment where the user is unable to hide wires within a wall or under carpeting.

The downside to this is that soundbars do not often have compatibility with other speakers. This means, though it acts as a receiver for itself, often it does not have the ports to handle processing other speakers. If you are hoping to use the soundbar to replace a receiver with separate surround sound equipment, you will want to do extensive research to see if there is a bar with the correct ports to do so.

In most cases, if you are hoping to use a soundbar to replace a receiver in a surround sound home theater setup with multiple speakers, it is better to stick to a normal receiver. The receiver within a soundbar is specifically designed to work with the soundbar’s speakers, not with an entire setup. You can look into digital surround sound speakers as an alternative, which attempts to replicate the surround sound feel by bouncing sound off of the ceiling and walls.

The Pros and Cons of Using a Soundbar as a Receiver

When considering the above, it is important to note that you can technically connect an active soundbar to a receiver, potentially as a center channel speaker. This means you don’t explicitly have to use the soundbar to replace the receiver, and there are even some kinds of soundbars called passive soundbars that need a receiver to work. So, let us compare the pros and cons of using a soundbar as a receiver rather than integrating it in with one.

When Would You Need a Receiver When Using a Soundbar?

Passive soundbars often have multiple channels, such as the center, left and right channel. Each channel has one or more speakers, and they all have connections in the back of the soundbar that will need to be hooked up to a receiver or amplifier. They have no built-in surround sound capabilities and need the outside hardware in order to facilitate its sound processing.

The benefit of passive soundbars often is pricing. They tend to be quite a bit cheaper than an active soundbar. If you already have a receiver from an old surround sound setup that you are attempting to replace, this is a great way to save some money.

Technically, you also could connect your soundbar as your center channel speaker. The only problem with this is that when using other speakers with a soundbar, it is inevitable that they will not be matching in sound quality and shape. This means that the sound that comes from your center channel, the soundbar, may be noticeably different from your other speakers. There are some cases where this technique may work, but it often isn’t recommended. If this is something that you’re interested in, check out our article explaining how to connect a soundbar to a receiver. If you plan on buying a soundbar for your center channel speaker, you might as well just buy a normal speaker.

Connecting an active soundbar in the above method isn’t advised due to the fact that you would then have two amplifiers. Having two amplifiers means that they could start interfering with each other, actually causing a drop in audio quality and can cause compatibility issues overall. It is important to note that the amplifier within a receiver is often higher quality than those in a soundbar, especially if you have a lower-end soundbar.