Once you have all the pieces for a new home theater system, setting it up for the first time can seem like an overwhelming task. One of the most important steps is determining what speakers go where and whether or not each speaker needs to be plugged into a power source. In-ceiling speakers require a more involved setup, forcing you to determine which and how many wires you’ll be using ahead of time.

Most speakers designed to be placed in a ceiling will be passive speakers. Routing the speaker to the receiver can already be difficult, and finding an outlet and plugging it in can be even harder. So, if you haven’t picked out your speakers yet, you probably want passive speakers to simplify the installation process. But let’s dive into more details on what you need to know.

What are In-Ceiling or In-Wall Speakers?

In-ceiling or in-wall speakers (our sizing guide) are mounted inside a wall or ceiling. To install them, you’ll need to cut holes in your drywall and run cables to and from the speakers. If you’re ready to commit to a speaker system wired throughout your house, you’ll need to lock in whether they’re going to be active or passive early on, so that you can effectively plan cable runs.

These speakers are used for a variety of purposes. Most commonly, in-ceiling speakers can be used to create a surround sound system within a room, just make sure the sound flow is unobstructed like we talked about in our guide. It’s popular to put speakers on the front wall, back wall, and ceiling of a home theater, and they’re generally much more aesthetically pleasing than external speakers.

We have more articles you may want to reference that discuss whether or not you need an amp for in-ceiling speakers and explaining further what the difference between active and passive speakers is. But the most important details you need to move forward on the decision are discussed below.

Most commonly, in-ceiling and in-wall speakers will be passive speakers. This means they do not need to be plugged into a power source. They only need to be connected to a receiver or amp which will act as both a sound and power source.

There is a little more to this story that’s worth going into: a passive speaker needs a powered signal from an amplifier at a minimum, but often the receiver has an amp within it, which is why you’ll see the terms used almost interchangeable. Again, you can reference our article on if in-ceiling speakers need an amp to better understand the relationship here.

Passive speakers can include any speaker that does not require a power source. They can be anything from simple surround sound speakers within a theater system to round in-ceiling speakers built specifically for massive home setups. Units like the Polk Audio RC60i 2-way Premium In-Ceiling Speakers (on Amazon) can be used to pepper your whole space with sound in an unobtrusive way.

The most apparent advantage of passive speakers is an easy connection. Simply connect the passive speaker to the receiver or amplifier with speaker wire and no other connections are required.

Passive speakers are usually lighter weight and easier to mount in your drywall or ceiling. They give you lots of flexibility with your system and how you choose to expand it, and are not too expensive when compared to active speakers. 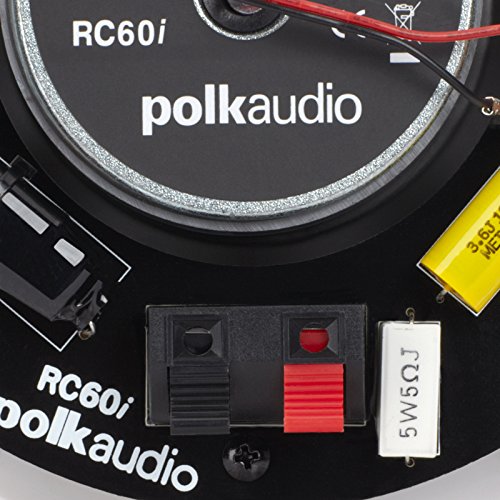 Passive speakers have to get their sound signals and power from an amplifier. That amplifier may be part of a receiver. Either way, you’ll need this piece of equipment to be physically connected to the speaker, and that may limit where you can put the amplifier/receiver and speakers.

Imagining a multi-room setup, it’s immediately clear that a receiver in one room is only able to control speakers in the next room over via an unbroken speaker wire connection. Multiple amplifiers and receivers might be connected wirelessly, but that is introducing a new problem and project into the situation.

This is the main disadvantage of passive speakers: the need to run wire back to the audio source. But, if you’re only planning to put up (for instance) 2 ceiling speakers above a Television that only need to have wire run to a local receiver, then this wiring problem doesn’t cause more work than an active-speaker setup would, which is good news if you’re considering the addition of a subwoofer alongside your ceiling speakers (our guide). It’s larger speaker systems that are harder to manage using passive speakers.

Active In-Ceiling Speakers Need to be Connected to an Outlet

While most in-ceiling speakers are passive, there are some active speaker options that require connection to a power source. Loud and powerful speakers or subwoofers that shake the entire room will often be active speakers. The Pyle Ceiling and Wall Mount Speaker (on Amazon) can actually accept an active or passive connection.

Active speakers can be standalone stereo speakers or part of a home theater system. Most commonly, active speakers will be larger, louder, and more expensive as they require their own power source. So based on your acoustic needs, they can give you more options.

Since active speakers include an internal amplifier, the amp and speaker will act seamlessly together. There’s no need to worry about buying the correct receiver for optimal performance, as the active speaker already has that figured out.

Active speakers also offer a range of benefits from a technical perspective. For example, it allows for bi-amping, which allows for more power to each channel when compared to passive speakers.

The most impressive feature of active speakers is how they usually have wireless capabilities like Bluetooth built in. This doesn’t save you from having to run wires – in this case the power wires – but it does greatly increase the ease of using a large stereo system, because not all of the speakers will have to have wires all the way back to the receiver. They only need wires to the nearest power source.

The main disadvantage of active speakers is the lack of a robust ecosystem. While some brands offer their own dedicated apps for managing sound over wifi, leveraging the advantage of not needing speaker wires going everywhere, there is no “top dog” that makes the process seemless.

So, while a wireless home system using active in-ceiling and in-wall speakers is possible, the user experience of operating it day to day may leave something to be desired, which is one of the reasons why they’re better for car systems (more on that here). But depending on the scope of the system, the work to install a whole-home system may be greatly reduced.

Maybe by now you’re comfortable enough with the decisions you need to make to move forward. We recommend going with passive speakers, because if you’re thinking about in-ceiling speakers you’re probably already all-in on a system that includes an amplifier and/or receiver. But active speakers will meet some user’s needs.

In the end, whatever in-ceiling speaker you use will need power from somewhere, but you get to choose if that power is coming directly from the nearest power source (for active speakers), or through speaker wire by way of an amplifier or receiver (for passive speakers).

Need of yours services for my new house in 5 month

I’ve 8 pair of wireless speakers and which is working fine so days only after few days they just disappear from smart sonic app which is quit irritating. Speakers power on 24/7 in 365 days but still I’m getting this issue frequently disappear from application and when I scan through WiFi it’s showing and manually I’ve to add it again.

I have in wall speakers Polk passive I need it powered . I have 3 pairs in 3 rooms each comes out 4 wires red black White green my question is What is the best way to power them ? I used to use old onkyo of mine it seems it died on me . Thanks for your time

Wonderful explanation. Thank you so much!!