Deciding to go with a projector for a supersized home theater experience is an exciting decision, but it does come with some complications. First and foremost, you have to mount the projector somewhere, and a quick search reveals numerous options. There are a few things to consider before selecting a mount, the most important of which are based on the size of your home theater.

There are two major types of projector mounts:

Within those two categories, you’ll find projectors that are fixed and extendable, and some that are universal while others are dedicated to specific projectors. Your ceiling and projector type will help you select the right mount. So, if you know what room your projector needs to go in, how you intend to use it – like for gaming, for instance (our guide) – and how big of a screen you’d like to project, use that info along with the projector you plan to use to pick a mount after taking into account the following info:

This is the bread and butter category of projector mounts. If you don’t have anything to work around on the ceiling, you have the luxury of placing the projector right on the centerline of the screen, so you really only need to consider the height of the room when looking into your mount. That, and compatibility to your projector.

As far as the height goes, if you have high ceilings or some other complication such that the ceiling is much higher than the screen, you’ll have to make sure that you select a mount that telescopes down however much you need it to, knowing that the projector’s sweet spot is going to be just above the top of the screen. You have some wiggle room here, but not too high or too low because you’ll outrun the vertical keystone correction capabilities of your projector.

As far as compatibility, it’s almost certain that you can use a universal projector mount, but take just a few moments to confirm the projector you’ve selected and whether or not it has screw holes that are described as “universal” or “standard”. When in doubt, read through the product comments. Unless you’re buying a very high-end projector, the odds are it will have screw holes that will work just fine with the universal projector mounts. 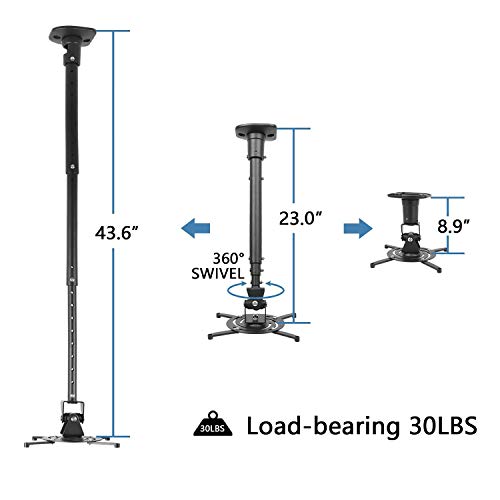 Once you figure out if your projector needs a proprietary mount or a universal one, you’re almost ready to go shopping. To prepare to select the right mount, you need to know how big the screen size you want to project is, and what a throw distance of your projector to match that size is. Again, there is some wiggle room here, and your unit’s specifications will describe distance to the screen for an optimal experience.

Once you know the distance from the screen, then you know where on your ceiling you want to put the mount, so the last question to answer is what the height of the projector needs to be. This will set whether you need a height-adjustable mount like the DYNAVISTA Full Motion Universal Ceiling Projector Mount or a simple unit that hangs just off the ceiling like the VIVO Universal Projection Mount.

Different spaces have different needs. If your home theater is a smaller room, or if there’s some other complication that makes you want to avoid the ceiling (like a fan or light fixture that is in the way) you may need to consider a wall mount for your projector. 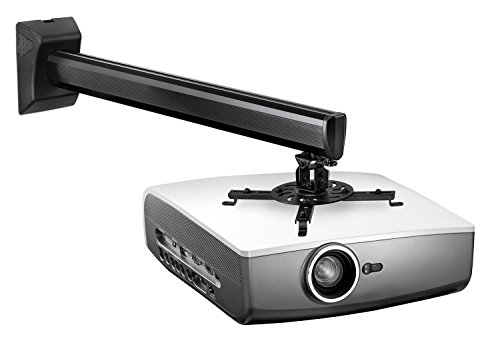 This can be a limitation for obvious reasons: the walls are by definition not in the center of the room, so how do you get the projector from the wall to a good spot to project from? Wall projector mounts like the Elitech Short Throw Projector mount (on Amazon) and the Mount-It! Projector Wall Mount (on Amazon) solves this problem by having an extendable arm that allows you to get the projector closer to an optimal spot.

This handy tools allow you to extend your projector three to four feet from the wall, and depending on your projector this might just be enough to get the image on the screen well enough to handle the rest with keystone correction.

Preparing For A Wall-Mounted Projector Setup 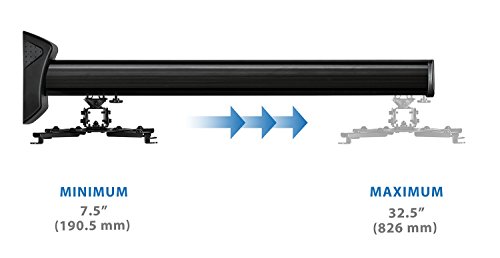 To be clear, the best spot for a projector is the centerline of the screen, so if you’re considering a wall-mounted projector option, it’s worth a few minutes for you to get a pen and paper to check a few things.

The distance from the wall and the length of the projector mount’s telescoping ability will set where the projector is, and you’ll have to make sure that whatever angle it’s projecting at from there is within the range of the projector’s keystone correction capability, measured in degrees. Even then, you’ll want to gut-check this against common sense: if the setup you’re planning only works with the telescoping arm all the way out and the keystone correction at its maximum angle, you probably want to rethink things.

The caveat to this conversation is that, if you are considering a wall-mounted projector setup from the back of the room, the problem is much harder to solve. You get to line the mount up with the centerline of the screen, so the only thing you need to check is the final distance from the projector to the screen–the throw distance–and make sure that lines up with the diagonal of the screen you want to project.

And one other thing not mentioned above is that most mounts have fine angle correction at the joint where they attach to the projector. Some rotation, tilting, etc. can be accomplished on most mounts, and these little bits of tolerance add up when trying to get the image on the screen just so. If you aren’t limited to some specialized mount, try to select one that has these fine angle corrections like the models linked above.

So, maybe now you’re ready to select a projector mount by considering the pros and cons of each, and your ideal setup. While ceiling mounts are easy to line up with the screen, they may be limited by ceiling height and other fixtures already on the ceiling that are in the way. Wall mounts allow you to place the projector anywhere on the wall, but the telescoping option will only get you so far. As with any part of your home theater, the planning here goes a long way, so don’t be afraid to consider multiple options, or even change projectors if you need to.