Smartphones have become an all-in-one entertainment centers for video, audio, and more. While our smartphones can do seemingly anything like controlling our TVs (our tutorial), for example, the audio sometimes just doesn’t cut it. If you’ve been wondering how to connect your smartphone to your home theater system, there are several simple ways to achieve this.

So how do you connect your iPhone to an A/V receiver?

The most common way to connect your iPhone is by using a lightning to HDMI or AUX adapter, or with Airplay on an Apple TV. These methods connect your smartphone to higher-quality speakers, and each method has pros and cons.

While it may seem like a complicated task, connecting your iPhone to your A/V receiver is easy, however, as I’ve written before, don’t expect a receiver to improve the sound of your music. We’ve previously looked at how to connect your smartphone to a projector on this blog, and similarly, it won’t take long to get your iPhone connected to your speaker system. Below are some of the most common ways to get your iPhone hooked up to an A/V receiver. 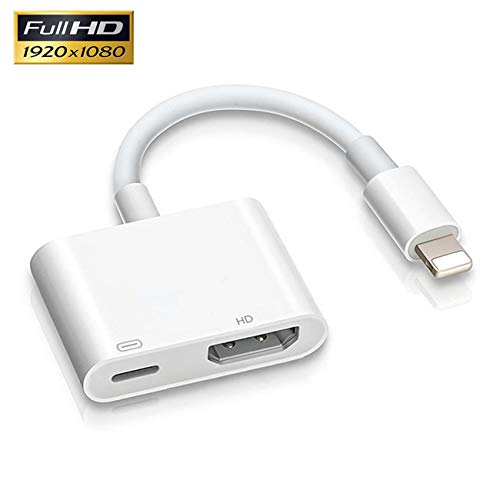 First, we recommend connecting your iPhone to your receiver with lightning to HDMI adapter. If you’re looking to buy a new A/V receive (our guide), most of our top choices include several HDMI ports along with a variety of other options.

While you are using an HDMI cord you do have to make sure you’re using the MHL HDMI port on the receiver. MHL stands for “mobile high-definition link”, and it’s a relatively new technology that allows you to connect a mobile device to your television with both audio and video capabilities. Look for the MHL port on your A/V receiver and connect to it with a standard HDMI cord.

Connecting via an HDMI cord is preferred because it offers impressive flexibility. If you’re looking to stream a YouTube video or Netflix episode to your TV, using an HDMI cord will allow you to connect both audio and video to your system with a single connection.

Not only will you have the ability to stream both audio and video to your television, but you’ll be taking advantage of the MHL technology that was made specifically for this purpose. If you have extra HDMI cords available, using the HDMI MHL port is definitely a great option.

The most obvious disadvantage to this method is the additional adapter that’s required. If you’re using an iPhone, you’ll need to buy something like the Ceinsi Lightning to HDMI Adapter (on Amazon) in order to get this functionality out of your lightning port. Apple accessories aren’t necessarily cheap, but once you buy the adapter, you’ll just need a standard HDMI cord to connect.

Some might prefer a wired connection for a variety of reasons, but in reality, it can be inconvenient to have another cord lying around. There’s no way to avoid the added clutter of having yet another HDMI cord to deal with when using this method.

Lightning to AUX or RCA 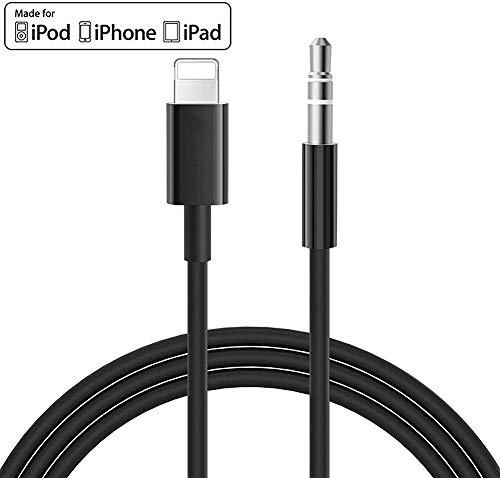 One of the easiest ways to connect your iPhone to your home theater is via an AUX or RCA ports. Most commonly, you can use the standard lightning to AUX adapter that’s included with your iPhone, and buy a 3.5mm to 3.5mm cable to connect to your receiver. These cables are easy to find, and pretty much every A/V receiver will have the necessary AUX port on the back.

But, if you want to simplify further, lightning to aux cables like the VoHappy Aux Cable (on Amazon) are a great option too. And they’re a decent bit longer than Apple’s adapter. Some newer receivers may have a direct AUX input as well. Similar to when connecting to an AUX cord in your car, use a standard AUX cord and plugin directly to the receiver.

If you want to use the RCA method, you’ll need a different adapter, or set of cords, either a lightning ot RCA cable or a 3.5mm to RCA cable that you then use with the lightning to 3.5mm adapter that came with the iPhone.

Pros of Connecting Via AUX or RCA

Connecting with this method is arguably the easiest of them all. As stated before, all receivers should have the necessary AUX and RCA ports. Both of these methods are straightforward and can be used by anyone, regardless of their previous audio knowledge.

Most of us already have an AUX cord. Simply plug in theAUX cord to the back of your receiver, and hook the other end up to the lightning adapter on your iPhone, and you’re ready to enjoy a high fidelity audio experience.

Cons of Connecting Via AUX or RCA

While the HDMI method allows for both audio and video connections, AUX and RCA will only provide audio. This is a disadvantage if you’re using your speakers as a true home theater system.

Similar to the HDMI method, there will be extra cords needed when connecting with AUX. However, there are small Bluetooth receivers that connect via this method that may be preferable if you want to avoid the extra cables. Overall, using the AUX or RCA ports is one of the easiest ways to connect audio.

Another great option to connect your iPhone to an A/V receiver is via an Apple TV setup. This method will allow both audio and video to stream from your iPhone, making it one of the best all-around options for connecting your phone to a receiver.

If you have an HDMI ARC (Audio Return Channel) port on your TV, you would be able to connect directly to your TV and route the audio back to your receiver.

Pros of Connecting Via AirPlay

The most obvious advantage of the Apple TV method is the ability to stream both audio and video from your iPhone. Not only will you be able to easily stream audio to your receiver, but there are multiple video streaming options as well. Apple TV allows for the convenience of both streaming from your phone or directly from the Apple TV interface.

If you’re already an Apple TV owner, it’s easy to get connected to your receiver and start streaming high-quality audio. Most importantly, it allows you to use your iPhone wirelessly, something the other methods don’t allow.

Cons of Connecting Via AirPlay

While the other methods involve simply connecting your iPhone via cables, Apple TV’s are somewhat expensive and will require more of an investment. However, your Apple TV will not only allow you to stream audio, but it will allow for many other entertainment options as well.

Another disadvantage is the additional power source required. While it is nice to not have your iPhone directly wired to your receiver, keep in mind that an Apple TV will require its own power source and HDMI connection.

Connecting your iPhone to an A/V Reciever is Easy

If you’re looking to stream high-quality audio from your iPhone to an A/V receiver, there are several options to make this a reality. Specifically, we recommend using a lightning to HDMI adapter, lightning to AUX connection, or connecting via an Apple TV. There are other methods out there too. Some receivers even include a built-in capability for Apple AirPlay!

However, if you have a standard A/V receiver and are looking to connect your audio as soon as possible, we highly recommend trying out one of the techniques described above. Follow these directions and you’ll be streaming high-fidelity audio from your iPhone in no time.