The Home Theater DIY > Projector > Can You Connect a Bluetooth Speaker to a Projector? 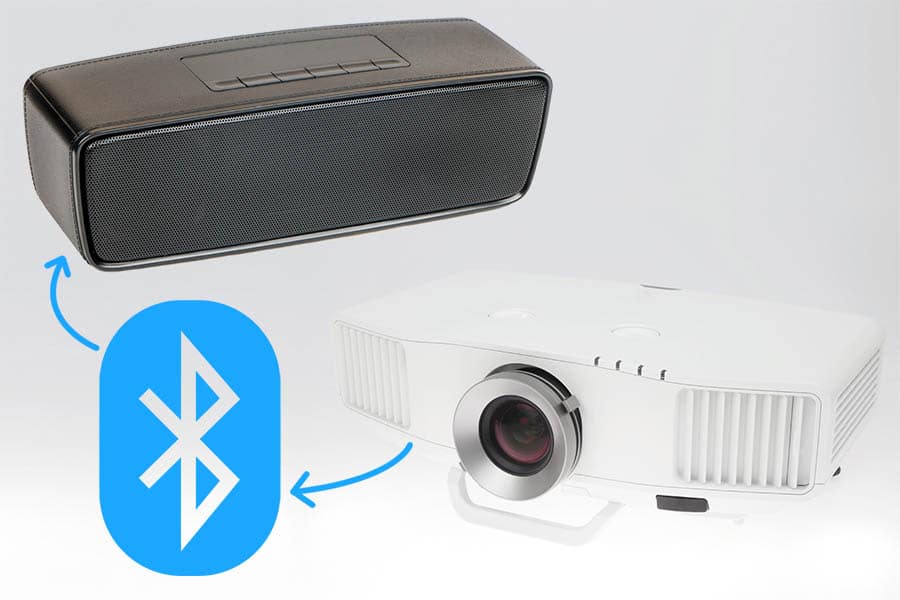 Can You Connect a Bluetooth Speaker to a Projector?

Connecting speakers to your projector can be a huge hassle. Although there are very effective solutions for wireless video (such as wireless HDMI kits and simply using streaming sticks like Roku or Fire Sticks), audio remains a complicated affair. However, there’s one technology that, although originally developed for cell phones, has found a new application in home theater projectors: Bluetooth.

You can connect a Bluetooth speaker to a projector. Bluetooth audio isn’t standard on all projectors, though, so you’ll need to make sure the projector you have, or the one you want to get, supports Bluetooth audio.

That last detail--making sure the specific projector model you’re planning on using has Bluetooth--is where the hard part here will be. This isn’t standard for all projectors, although it’s starting to become more common. And the good news is, if you already have a projector that doesn’t have Bluetooth built-in, there are solutions for that as well. Let’s dive in.

When Can You Connect a Bluetooth Speaker to a Projector?

The short answer to this question is: when your projector has Bluetooth built-in. But how do you know that? Well, the first simplest place to check would be the product page with your projector’s manufacturer.

Listed alongside all the other tech specs should be any notes about Bluetooth capabilities, as well as details on all the audio hardware (input/output ports) the projector has. You might even spot a Bluetooth logo somewhere on the projector itself, but there’s no guarantee. Look for it in the product description.

Does the Projector Need to Have Bluetooth Capabilities

One thing to watch out for here is that, at least for now, Bluetooth capability in a projector tends to be more common in cheaper portable-style projectors. Some budget models, like this VicTsing projector (on Amazon), not only have Bluetooth built-in to handle the sound, but screen mirroring to handle the video, making them streaming solutions for watching video content on your phone on the go.

Even some more expensive portable models like the Anker Nebula Capsule (on Amazon) sports Bluetooth capability, but if you’re trying to build a home theater system, you probably aren’t interested in options that are focused on portability.

Rest assured, though, that there are larger home theater projectors that have Bluetooth as well. For instance, the LG Ultra Short Throw LED Home Theater Projector (on Amazon) has Bluetooth out, but doesn’t have a battery and definitely isn’t designed to be carted around.

This is a serious contender for your home theater setup, and the Bluetooth feature here has the benefit of being able to handle enough of the audio lifting to justify the projector’s premium price. It may mean that you can forego a complicated wiring setup that would otherwise drive your install price up.

But what if your projector doesn't have Bluetooth already built-in? There are various ways to add Bluetooth capabilities to projectors and many other devices.

How to Connect a Bluetooth Speaker to a Projector

Once you’ve confirmed your projector has Bluetooth built-in, the setup shouldn’t be that different from connecting a Bluetooth speaker up to your phone or another device. The only trick might be your projector’s unique flavor of menus and controls.

This is one of those times it’s handy to have the user manual because that will surely have directions on how to navigate to the screen that will allow you to control the projector’s Bluetooth system. So go look through one of your junk drawers for the user manual or do a quick Google search.

From there, connecting a Bluetooth speaker to a projector is very simple:

With troubleshooting out of the way, you should have your speaker connected to the projector, so, go ahead and fire it up and test it. If the audio quality is good enough, then there’s nothing more to do.

What If The Projector Doesn’t Have Bluetooth?

Great question. Many readers will already have their projector in hand, so you’ll be pleased to hear that just because your projector doesn’t have Bluetooth built-in doesn’t mean you can’t use a wireless Bluetooth speaker.

There are adapters made for just this situation, such as the TaoTronics Bluetooth 5.0 Transmitter and Receiver, which connects to the projector’s 3.5mm jack and converts the audio signal to Bluetooth. These devices may not be robust enough to handle a 7.1 channel of Dolby Atmos, but they’ll get left and right speaker signals (at least) up into the wireless spectrum where your Bluetooth speaker can connect to them.

Your mileage may vary when it comes to connecting units like this: the lack of a screen or any other controls can make connecting them to a speaker somewhat complicated, but you’re still just a few instruction booklet pages away from having your speaker set up.

Skipping the Middle Man (Bluetooth from the Video Source)

If you’ve got an HDMI signal coming from your computer, for instance, you can probably use the Bluetooth in the computer to connect directly to the Bluetooth speaker, and this may even be a more robust option since you might want to use the computer with the speaker when it’s not connected to the projector.

The same variation on the theme applies to any HDMI source, really, because you can use an HDMI audio extractor (on Amazon) to send the audio source to a Bluetooth transmitter at the video streaming box, instead of at the projector.

Because of that, you may be making your life easier by putting all this equipment on the ground, not at the projector. So, it’s at least something to consider as you put a plan together.

So, now you probably know what you need to take the next step. If you haven’t purchased a projector already, it’s probably worth your time to consider one with Bluetooth if you’d like the Bluetooth speaker you already have to be compatible.

This can save you time and money which you now won’t have to spend managing some other speaker solution. And if you already have your projector but it doesn’t have Bluetooth built-in, no problem. There are plenty of aftermarket solutions in the way of Bluetooth transmitters.