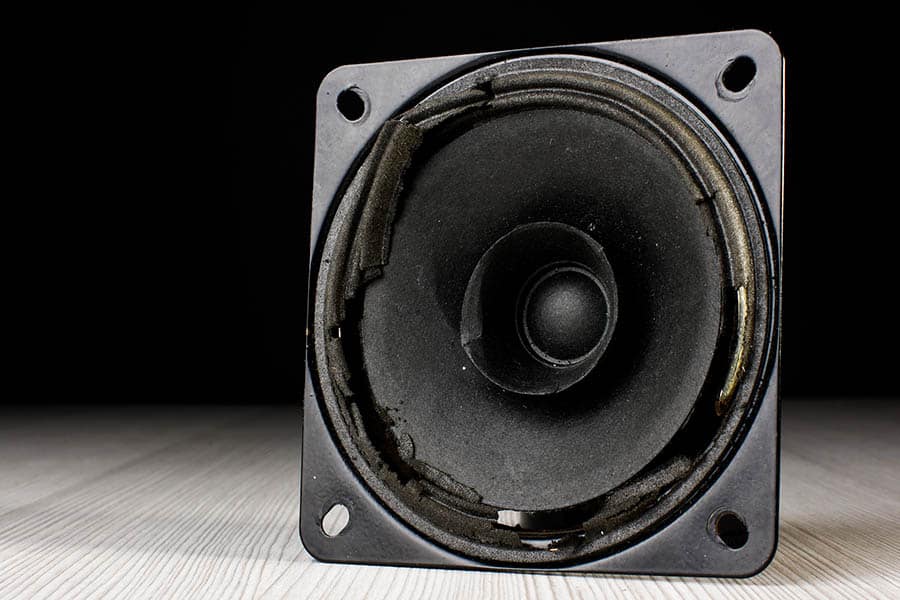 Power surges can be damaging to electronic equipment and especially damaging to speakers. The power outlets in your house produce a 120-volt charge, and most of that voltage does not make its way to your speakers. During a power surge, output voltage spikes way beyond this usual threshold.

A power surge can blow out your speakers. If you don’t take precautions to protect your speaker system from power surges, a lightning strike or starting a large appliance could send a high-voltage charge through your home’s electrical system and damage your speakers.

There are several ways to protect your sound equipment including surge protectors, power conditioners, uninterruptible power supplies, and rearranging the appliances in your home. The feasibility of each of these remedies will obviously depend on your unique situation.

What Is a Power Surge?

A power surge is a sudden jolt of electrical charge that courses through your household electrical system. Although when people think of power surges, they typically think of lightning strikes, these are actually the cause of very few power surges. More often, power surges are the result of failures somewhere in the power grid or sudden changes in draw caused by large appliances. With some preparation, the negative effects of power surges can be avoided with the use of surge protectors.

One of the most common sources of power surges are high-wattage appliances. Appliances with moving parts, heating, cooling, or microwave elements, use the most energy in your home. When these appliances are turned on, they require a large amount of power to run, often above the wattage they’re rated to run at.

This excess power draw affects the entire circuit they are connected to, and could send too much power to other electronics on the same circuit. This effect is amplified following a power outage.

When the power goes out, people do not typically turn off or unplug their large appliances. As a result, when the power finally kicks back on, these appliances will cause a huge collective draw. This is the reason why your light bulbs shine so bright in the few moments when power is restored after an outage.

Another way that power surges can happen, albeit at lower voltages, is when your home’s wiring is damaged or exposed. This may be the result of rodents chewing on wires, extremely old wires, or improperly installed wires. If you suspect that you are experiencing power surges because of your household wiring, it is important you call an electrician as soon as possible, as such problems can be a warning of a fire hazard.

Power Surges Caused by Lightning (More Rare Than You Think)

One rare but extreme case of a power surge can come from a lightning strike. Although exceedingly uncommon, a lightning strike to your house’s electrical circuit can push a current with voltages orders of magnitude larger than any household appliance might require. If this extreme power surge gets to your speakers, it is almost certain to blow them out.

How Can a Power Surge Affect a Speaker System?

The sound that you hear is the result of the synchronous vibration of particles, usually in the air. This can be generated by any sort of high-frequency vibration with sufficient amplification. There are numerous ways that sound vibrations are transformed into an electrical current.

Most of these methods involve an electrical property known as induction. There are exceptions to this, such as piezo pickups, which transform vibrations into the electrical current with pressure-sensitive crystals. All speakers, however, use induction to function.

How a Power Surge Damages Your Speakers

When there is a power surge due to household power sources, such as a sudden appliance power draw or the restoration of outed power, there is a possibility that the current could travel through your sound system to your speakers.

With a direct current surge such as lightning, your speaker cone won’t vibrate. Instead, it will cause the coil of wire to be pushed in one direction. If that direction is out, you will probably end up with a broken speaker cone.

How to Protect Your Equipment From Power Surges

Luckily, protecting your speakers from power surges isn’t difficult. Surge protectors, power conditioners, and uninterruptible power supplies are all ways to protect your sound system from surges. There are also measures you can take to diminish the likelihood that power surges will affect your home theater.

The most basic form of protection against power surges is a surge protector. Surge protectors reroute electricity over a certain voltage to the ground so that it doesn’t get to the electronics plugged into the surge protector.

A more advanced option is a power conditioner that smooths out the minor dips and spikes in electricity that regularly occur in your house. Power conditioners are almost always equipped with surge protectors.

Another means of regulating electricity flow is with an uninterruptible power supply which provides backup power when the main power supply fails.

Another thing you can do to protect your speakers is to make sure large appliances such as refrigerators, air conditioning units, dishwashers, microwaves, and heaters are not on the same circuit as the speaker system. You will need to determine which outlets correspond to which circuit breakers in your home. Just because devices are plugged into two different outlets does not mean they aren’t on the same circuit.

Sometimes pulling appliances off the of the circuit your home theater system is on is impractical. In such a case, a surge protector for your home theater equipment is usually a safe bet. Remember, some precaution is always better than no precaution.

The Physics Behind Sound Signals

When a wire is coiled, the properties of induction change slightly. Since the induced magnetic fields overlap, they amplify each other, wrapping around the row (or rows) of wires according to the right-hand rule. This creates a second right-hand rule. When you have a coil of wires in the direction of the curled fingers of your right hand, it will generate a magnetic field inside of the coil in the direction of your outstretched thumb.

The implication of this is that if you were to charge a coil of wire and put a magnet inside of it, the magnet would be ejected in the direction of the magnetic field. Conversely, if you move the magnet through an uncharged coil of wires, it will generate a charge according to the right-hand rule. It is this property of electro-magnetism that enables most sound-producing and recording devices.

How Sound Is Converted to Electricity and Back

Speakers take an alternating current electrical signal and convert it to sound vibrations at the same frequency. To do this, flexible, lightweight material such as paper, carbon fiber, aluminum, or even Kevlar is shaped into a cone because this shape enables the most force to amplify the sound signal.

The center of the cone is connected to a coil of wires passed through a doughnut-shaped magnet. When a high-powered, alternating current speaker signal passes through the coil of wire, it is compelled to vibrate within the magnet as it is either attracted to or repelled by the magnet’s magnetic field.