You have a lot of money invested in your electronic devices and it makes sense to protect them; one thing to worry about is power surges. Purchasing insurance from the device’s manufacturer is an option (and it’s one you should consider) however, surge protectors are really good at protecting from this potential hazard. You can invest in an inexpensive surge protector, (our list of the 10 best), but do you need one for all your electronics? Are surge protectors really necessary for all electronics?

You don’t need a surge protector for all electronics, but the devices do act as cheap insurance for your expensive tech gear. They can also add features to your setup, especially when you spring for an uninterrupted power supply/surge protector combo.

To put it simply, it’s not 100% necessary to own a surge protector but it’s a wise choice if you have a lot of expensive equipment that needs protecting. Adding one will certainly protect your tech and potentially avoid a lot of crying and heartache later. With that in mind, you do need to know which devices to protect and what to look for in a surge protector, otherwise, you may find yourself replacing expensive tech gear.

What do Surge Protector’s Do?

A surge protector has one primary function: it’s designed to prevent too much power from reaching your expensive electronics. The device acts as a shield that blocks the voltage spike. Power surges occur when the voltage flowing through the wires is higher than normal. The surge isn’t prolonged, usually, only for a few seconds, however, it’s enough to damage delicate tech.

It’s important to note that surge protectors look similar to power strips, so make sure you know what you’re looking at before you buy one. They also provide additional outlets but come with an added benefit. The device will prevent anything higher than 120 volts from reaching the connected electronics.

How Does a Surge Protector Work?

Your electronic devices have a specific voltage requirement and when they’re powered on, the devices need a continual supply of electricity to function properly. Your wall sockets do provide an electrical current but can’t guarantee it’s always steady. In other words, the electrical current running from the source through the wall outlet, and to your device can change on a moment-to-moment basis.

The surge protector ensures that extra voltage doesn’t reach your electronic device. Instead, it sends the excess voltage away, the electrical energy is diverted to the outlet’s grounding wire. In case you’re wondering, it’s not left in your home’s electrical wiring or sent to another outlet. This ensures that you don’t have to worry about a power surge if you plug another device into a different outlet.

When Should You Use Surge Protectors? 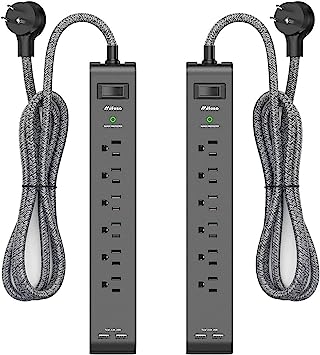 As you may know, you always have the option of buying insurance for your electronic device, in fact, most higher-priced items come with it as an optional add-on. For many people, it’s worth the added expense, especially with larger, higher-priced devices. You’re protected from additional expense if there’s a problem with the component.

A surge protector works similar to product insurance in the sense that it protects your expensive devices from a damaging electrical surge, however, you don’t need a surge protector for every device. For example, you don’t need one for a lamp because if there’s a power surge to your lamp, you only need to change the lightbulb. It’s a little different when it costs more to replace the entire device.

What Devices Should You Plug Into a Surge Protector?

You don’t have to buy surge protectors for every device that uses an electrical current, but there are some you want to plug into one. Your computer is one device that benefits from being plugged into a surge protector. It’s filled with small components that are easily damaged during a voltage surge and the device is expensive to replace.

Most product warranties are only good for a few years. Sometimes you can extend the warranty but it does cost. When you use a surge protector, it helps ensure the devices are still covered from damages due to an unexpected power surge, however, it’s important to be able to see the signs that you need a new one (our guide) that way you can continue taking care of your electronics.

Features to Look For in a Surge Protector

You never seem to have enough wall outlets for all of your devices, that much is for certain. One of the great aspects of using a surge protector is that it can also solve this problem. You can find inexpensive surge protectors that come with multiple outlets and you can also connect several devices and know that you don’t have to worry about high-voltage damage.

Most electrical devices come with wall plugs. These are the small, black box plugs that block nearby outlets. One will cover both electrical sockets on a standard wall plug. There are surge protectors designed with additional space between the outlets. You can connect multiple wall plugs and still have room for other components, perhaps, one of the more useful features of a surge protector.

Some surge protectors come with USB ports so you can safely charge your smartphone and other handheld devices. It is safer than using a wall outlet, but you want to check the amps because you need 2 amps or more for fast charging. You’ll find the surge protector’s amp rating in its product description.

Surge protectors have a life span like any other device. It’s also impossible to tell when one is going out until your connected device stops receiving power. Models that come with small indicator lights that are green when the surge protector is working, and ren when it’s not, make it easy to know when the unit needs replacing.

You don’t always need to keep power flowing to your connected devices. In fact, not only does it waste electricity, but it can also shorten the surge protector’s lifespan. On and off switches on a power strip are convenient, because, instead of unplugging the device from the outlet, you can simply flip a switch.

One Feature You Don’t Need

Some surge protectors boast that it conditions the electricity, which to many, sounds very cool but it’s ultimately an unnecessary feature you don’t need to pay for. Your electronic gear already filters out everything it doesn’t need and converts the electrical current into the 120V your devices use for power.

Even a surge protector with all of the available features isn’t enough to power your devices during a blackout. Once the electricity in the room is off you won’t have a current running to your connected devices. You can resolve this problem by paying a little extra for a surge protector. You’re looking for one that has an uninterrupted power supply. The CyberPower CP850PFCLCD (on Amazon) comes with everything you expect from a surge protector.

Your devices are protected from voltage spikes, you also have plenty of outlets and a USB port. The difference between the CyberPower and standard surge protectors is it will keep some devices running when the electricity is out. When your Wi-Fi transmitter or internet router is connected to the device, you’ll still have a network connection. It will make the time pass faster when the electricity is out when you still have a Wi-Fi signal.

Surge Protectors Are Necessary For Some Devices

You don’t have to plug every electrical component into a surge protector, for example, it’s probably not necessary for your toaster. Devices such as your electric tea kettle, coffee maker, hot plate, and microwave are also easy and inexpensive to replace. They’ll usually survive a power surge anyway.

With that said, your delicate and more expensive equipment could be at a higher risk, however, you may not even notice a power surge affected some of these devices because it’s different for electronics with microprocessors. A sudden voltage surge can damage these delicate parts. That’s why a surge protector is a great choice: they can prevent damage from high voltage occurring and the component is surprisingly inexpensive.