Are projectors expensive to run? While different projector types have different operating costs, all projectors are cheaper to run than flat panel screens for large (80”+) images, and among the most popular projector styles (DLP, LCD, and LED), LED projectors have the lowest costs.

However, there are many things to consider along with the projector type. The brightness, resolution, and other costs such as bulb replacements should all have an impact on your decision on what projector to use, and why. To learn more about projector specs, take a look at our post explaining the different projector specs and what they mean.

Average Cost of a Projector Based on Type

The different types of projectors (and their mounts – our guide) have their own pros and cons. Below, we’ll discuss some of the specifics for each style. Specifically, how they impact the bottom lines of the purchase price, power cost, and bulb replacements.

DLP stands for Digital Light Projection. It’s a method in which tiny mirrors in combination with a spinning color-filter wheel are used to manage the light that forms the projected image. A spinning disk of filters in front of the bulb controls which color lights hit which mirrors and the combined image is projected onto the screen.

The average cost is going to be somewhere between $200-$500 for one that is good enough, and maybe as high as $1k if you’d like something with 4k. The lumens, or brightness rating of the projector, is also one of the characteristics that drive this number up. You probably only need a 1500-2500 lumen projector for a typical room, but if you have a lot of windows and plan on daytime usage, you may need more.

The bulb is typically quoted as lasting 2,000 to 5,000 hours, and while that sounds like a huge amount, if you put it in 8-hour day terms, it’s actually less than a year. (2000 hours is about 35 weeks of 8 hour days). Now, you won’t be watching something 8 hours a day (probably) but a business or school application might require a projector to be on this long, and the bulb prices can add up.

Consider the high-end Optoma UHD50 True 4K Ultra High Definition DLP Home Theater Projector, which calls out a 15,000 hr lamp life, and good thing, because a replacement branded bulb runs over $400. Projector bulbs are almost never under $50, with most hovering closer to $100 and many are far more expensive if you are going through the original brand and manufacturer to purchase them.

Costs to actually run these projectors, day to day, aren’t too different for DLP and LCD projectors, discussed below.

How Are They Different From DLP?

LCD or Liquid Crystal Display projectors also use mirrors, but fewer of them. Inside, there’s no spinning disk like in the DLP projectors, but there are 3 LCD screens, each set to carry one of the three primary colors and all the associated hues of the given image. When projecting, these three LCD images are combined through the mirrors before being projected on the wall.

Hardware cost here is going to be similar to DLP projectors, trending a bit higher because LCD projectors don’t focus as much on edge cases as DLP projectors do. A similar price range of $200-$500, including solid candidates such as the Epson VS250 SVGA 3,200 lumens 3-LCD Projector falling about in the middle. If anything, though, the higher end seems higher for LCD projectors (note the Epson Home Cinema 4010 4K 3-Chip Projector nears the $2k mark). Your lumens and resolution requirements will set this price more definitely, with higher brightness 4k options coming in above $1k typically.

The bulbs, similar to in DLP projectors, are typically going to last around 2,000 hours, although some higher efficiency business-use projectors advertise up to 5,000 or even 7,000. The same bulb price comments as above apply here.

Pricing and Cost to Run

One important thing to note about pricing here is that there are actually two styles of LCD projectors. These are called 3-chip and 1-chip (sometimes 3-screen and 1-screen). This refers to the number of screens inside the projector managing the color. Without going into too much detail here, the 3-chip is the industry standard, which is why even entry-level models advertise it. Don’t let yourself be up-sold on the 3-chip moniker, because they should all have that, even though some manufacturers advertise it as a differentiating feature.

And as far as the cost to run LCD projectors, the lion’s share of the energy is spent in producing the light at the bulb (although the DLP projectors use a spinning wheel which requires some energy as well). However, projectors in generally use less energy than the equivalent flat panels. This is easy to understand: a 100” flat panel, or even an 80”, is going to use much, much more energy than a single bulb, even though that single bulb is nothing to sniff at. 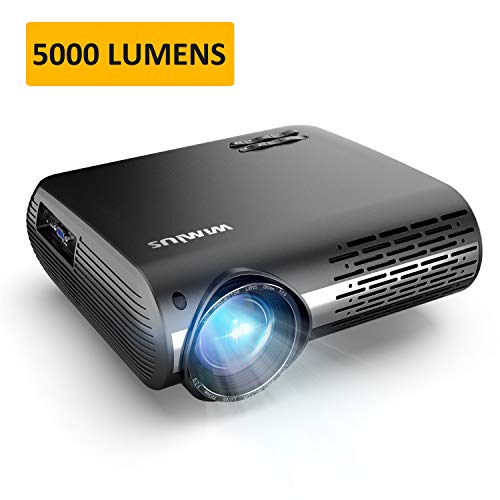 Unlike the other two methods, the LED projectors have an inherent advantage in that they don’t use a single high-powered bulb, so you don’t have to install such a bulb (more on other things you don’t have to do in our do’s and don’ts article). Instead, the light source is an LED array that leads to lower replacement costs over time, because the LED lights last much, much longer than bulbs, it’s not uncommon to see a projector advertising 50,000 hours of run-time for an LED projector.

So, the bulb cost over time (“replacement parts”) really isn’t as significant with LED projectors. That’s good news for businesses or anyone who wants to have a projector on all the time, or who wants to install a high-end projector in a way that’s not easy to physically replace eventually.

What about other costs though? Are they more expensive to start out? Well, not really, with a typical LED projector like the WiMiUS P20 Native 1080P LED Projector coming in at <$300. What’s more, LED projectors will use less electricity and have a lower cost here when compared to LCD or DLP projectors.

As you can see, there are a few different things to think about when it comes to projector costs. The electricity usage is higher for DLP and LED projectors than equivalent LED projectors, but all will be lower than the cost of a giant flat panel screen. There are maintenance and replacement costs to do with bulbs in some projectors, but not LEDs, and there are entry-level models <$500, as well as high-end units >$1k for each type.

Seeing all this, though, the best method for you to find the right projector for you will be to figure out what you want to do with it. What do you want to play or watch? What quality will that require? These performance requirements will set which end of the range you need to be looking at.

And as far as the core question, are projectors expensive to run? I would say the answer to that is a firm “no.” There are costs, of course, but if you’re running a home theater, the costs aren’t huge. LED might be less expensive than DLP when it comes to your electric bill, but no projector is going to use more electric than, for instance, your AC unit. If you’re already committed to building a home theater, projectors aren’t that expensive to run compared to the other options.

Maybe you’re still stuck between choosing a projector or a TV, if so, check out our post explaining the different pros and cons between TVs and projectors. This article will help you decide which one would best fit your scenario.

Your help will be appreciated. Thank you!