There seem to be a plethora of HDMI cables out on the market, but is one so different from another? If you have connected anything to a display in the last decade, chances are you have used an HDMI cable before. They are ubiquitous, often cheap, used for all kinds of displays, and they show the same symptoms when they need to be replaced (more in our guide).

Most HDMI cables are the same. What matters the most is the standards used in the connection ports on your devices. While there are different HDMI types, chances are that almost any cable will function for an average consumer’s needs, with a few exceptions that are worth learning more about.

When you head to the store, you will undoubtedly be bombarded with loads of cable brands and types. Some packaging certainly offers insight into the cable’s quality and function, but frankly, some terms are just branding. To better grasp what to look out for, it’s good to understand how exactly an HDMI cable works and how to extend them if you need to (our guide).

If you are tech-savvy, you may have already heard of different HDMI standards and what they intend to do. HDMI is one of those technologies that can seem simple on the surface but gets a bit more complicated once you dig a bit deeper. Essentially, several HDMI standards are used, and more on the horizon. Here are a few you may run into: 1.4, 1.4b, 2.0, 2.0b, 2.1 (Released in 2018)

These standards are defined by the HDMI Licensing Administration and The HDMI Forum. They offer manufacturers fundamental specifications that cables and devices have to follow. While standards change and get released frequently, physical cables don’t change as often. So in a way, standards matter, but for most consumers, they really don’t.

Most cable standards will provide the appropriate bandwidth and support for most display resolutions we see today. Even an HDMI 1.4 cable, released in 2009, can support 4K video at around 24 FPS. This means that even older cables have the capacity to handle video and audio from today’s modern TVs and displays. One thing that can relay a lot about the function of a cable and signal quality is TMDS.

TMDS, or Transition Minimized Differential Signaling, is how an HDMI cable transfers data. The cable itself houses several small copper wires relay and code data from the source to display an image on your TV. What matters here is that if the cable is working, it will display the image, but if not, it won’t. There will be now decayed image or visible artifacts.

This means that the quality of the cable, and the standard, don’t matter. The image will display the same on a $3 cable as a $30 cable. In the end, standards are more about changing how information is managed, and that is controlled at the ports. While cable standards shouldn’t worry the everyday consumer, cable speed might be something to understand. 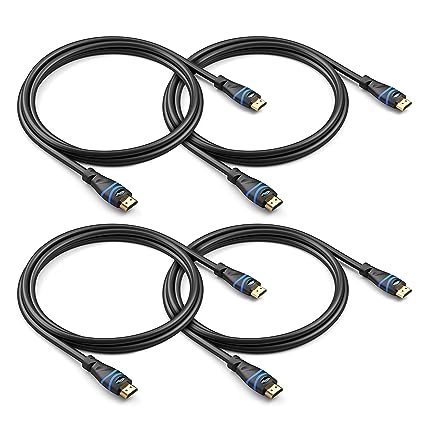 While the standard may not be a big deal, cable speed may have an effect on the quality of your image. Standards have more to do with the capability of the ports being used to display data. But, cable speed can be used to identify better quality cables.

Cable speed is also defined by the HDMI Licensing Administration and The HDMI Forum. The specifications they design have to do with the maximum bandwidth. Keep in mind that while these two organizations set standards and cable speed, not every manufacturer will produce cables with these requirements.

What Are the Standard Cable Speed Categories?

For the most part, though, you will see cables grouped into one of four categories, standard, high-speed, premium high-speed, and ultra-high-speed. Within these categories, you will also find sub-categories. You may run into cables that can support ethernet or cables that are designed with automobiles in mind. But if you are shopping for a home theater needs, be on the lookout for the main four listed above.

Standard is the slowest of all the cable types at around 4.9 Gbps. This will suffice to handle 1080p but not much else. Because of this, standard cables are hard to come by. More often than not, you will find only High-Speed cables or higher. These HDMI cables will support at least double the bandwidth of a standard cable and handle 4K video with ease.

If you want to source cables that are “future-proof,” meaning they won’t go obsolete in five years, then finding cables that are Premium or Ultra High-Speed can be advantageous. Other than that, High-Speed will handle almost any kind of video you might throw at it.

Which HDMI Cables Should You Buy 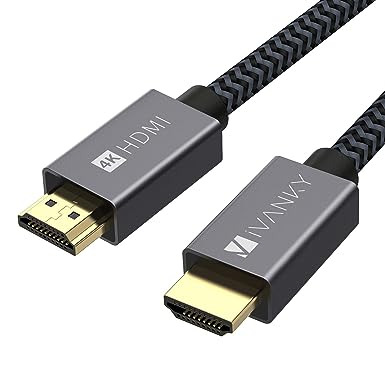 Now that we have gone through the difference in HDMI cables, you may have already come to the same conclusion we have here. Which is that in most cases, almost any HDMI cable will work. In fact, tests have been done on a myriad of consumer and professional cables. They have found that nearly all of them work with the types of data consumers need them for.

In these tests, even random cables found in old boxes worked with transferring 4K HDR video. This means it might be harder to find a cable that won’t work for your set up than to risk buying one that doesn’t. But to help you along on your journey, here are a few cables that will work with most systems (all of the links take you to Amazon): the AmazonBasics High-Speed 4K HDMI, the Powerbear 4K High-Speed HDMI, and the Twozoh Braided High-Speed HDMI.

As you can see, all of these cables are High Speed rated and reasonably priced. All these should be more than adequate to transfer 4K video. There are cables out there that are Premium or Ultra High speed that can tackle more data, but as of now, there aren’t many receivers that operate with higher than 4K resolution. But there will be in the future. This is why some users will opt for the more advanced cabling.

If you are running HDMI through walls, this may be even more important as you won’t have to change them. 8K video is coming, and soon it will become the standard just as 4K has. To better prepare for this eventuality, future-proofing your system is key. Here are some cables that will help (these links also take you to Amazon): Zeskit Maya 8K Ultra High-Speed HDMI, the Arisen HDMI 2.1 Cable, and the Monster Ultra High-Speed HDMI

For most consumer applications, almost any HDMI cable will do. While there are differences in standards and speeds, most cables you will see on the market in the last ten years can handle what you throw at them. Don’t get fooled by marketing gimmicks and branding. Sometimes even the cheapest, most basic HDMI cable will get the job done.

Hi John , hop u fine . Pls reply me as it’s my first mail and I watch all ur videos and updated my self . I have issue of sound from my Sony blue ray home theater BD9200 connected via HDMI arc ports to Sony 80 inch smart led . Now issue is sound from speaker comes after 25 to 30 seconds after turning on by remote of tv and some time even tv turns on but not the blue ray home theater !! So pls tell me what is the issue why not sound comes soon . Is it due to home theater turns on ana take self calibration and check cd and ready to tv mode or their is done thing wrong . And why some time HT not turns on by tv remote