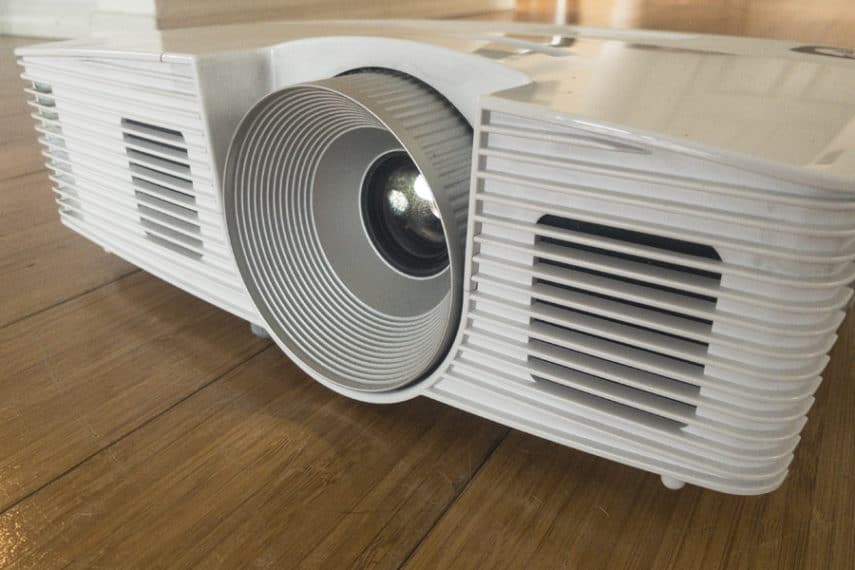 A lot of the magic of home theatres is tied up in things that you don’t get to see a lot of the time. Sure, there are the high-end systems that have a certain visual wow-factor. But at the price range most normal people are willing to spend on their home entertainment system, the biggest bang for your buck can come from stepping outside of the rat-race of bigger panels and jumping right into the literal big leagues: projectors.

They can be intimidating, and a high-end projector can cost you just as much as a high-end television, but, plenty of people find success with mid-range projectors because they offer that wow factor of a giant screen that is good enough. And, what’s more, with the growth of projector use in the industry, most of the hardware is now easier to set up and use. Some people may worry that they will not be able to properly adjust the image on a projector, but that’s why we’re here. In this article, we will cover the basics of setting up your projector correctly: adjusting the angle, fitting the image to your screen, and straightening.

Here are the steps to correctly adjust the image on a projector:

These are a little too much for some people, and that scares them off of using projectors due to the added hassle, but, these things are really not too hard to handle. Next, we’ll explain, in detail, the different steps to correctly adjust the projector’s image.

Adjust the Angle of a Projector

Take angle adjustment, for instance. Once you have the projector set up, the chances that it lines up with the screen properly are pretty low. As with anything, there’s going to be a little fiddling to get it set up at first, and a projector’s main category of required fiddling is going to be playing with the angle of the image coming out of it. You should picture it this way: there’s a rectangle of light coming from the projector’s front lens, so the job of setting the angle becomes a job of getting that image “square” with the wall. There are some digital tools for this, discussed later on, but first and foremost you should try to get the physical hardware lined up as best as possible.

For the average projector, your first stop here will be the feet. On almost all consumer-grade projectors, there are going to be at least two, and maybe three or four feet on the bottom that are designed to be screwed in and out to level the machine. Obviously, if your projector is mounted from the ceiling, this won’t apply. But for projectors that are sitting somewhere, your first task will be to turn it on, point it at the screen, and start by using the projector’s feet to adjust the image. You want to make it so that the top two corners of the image line up with each other horizontally. If your screen is level, which it probably is, this can be done by setting an actual level on top of your projector and watching it to properly adjust the feet. More often than not, though, even if you use a level it’s not going to line up perfectly with the screen, so I recommend skipping that and just watching the image.

One important note here: the image may overlap with the screen, that is, it may be too wide, or indeed too narrow at this point. We’ll play with that later. For now, focus on the top two corners, and get them level with the screen before moving on.

Adjusting the Angle on a Ceiling Mounted Projector

“So what if I have a ceiling mounted projector?” Great question. Most ceiling mounts have at least some articulation, or adjustment, available at the joint that holds the projector up. So, look at your mount and see if there’s any way to adjust the angle from there. If not, there are a few other options, so keep reading.

Next, you can look to see if your projector has what are called lens-shift controls. Instead of moving the whole projector by modifying the length of the feet, or the joint holding the ceiling mounted the projector, you may be able to actually move the lens itself. In my experience, this is a less common feature, especially in budget models. But consult your projector’s handbook for any instructions on “lens-shift”, and see what it has to say. You may be able to modify the actual position of the lens to get those top corners level. Once the projector is level, it’s time to start addressing the rest of the fit.

Adjust the Projector to Fit Screen – KeyStone Corrections and Zoom

So, you’ve got the top corners level, but the bottom corners are not lining up. Maybe the image looks tapered like a funnel, wide at the top and narrowing toward the bottom, or vice versa. This trapezoid-type shape isn’t what you want, but it is progress! It indicates that your projector isn’t placed directly in the center of the screen which, makes sense. Projectors are almost always sitting on a table or in an alcove below the screen or mounted somewhere above the screen. The light, then, hits the screen at an angle, so that gives you your wide-on-one-end shape.

Luckily, this such a well-known issue with projectors that it is industry standard to have a tool that corrects it, and that’s called Correction. It’s named that way because a “keystone” from masonry is the last block that holds an arch up, and it has that same trapezoidal shape.

Keystone correction is a digital control that allows you to fix this angle issue by changing the way in which the projector is displaying the image. This means that through either physical buttons or digital controls (consult your projector’s manual to figure out how to access the keystone correction) you can simply adjust the correction up or down to see your progress. Once you’ve accessed the keystone projection correction, use it until the image appears rectangular. Basically, until the top corners line up with the bottom corners in a straight line. Reference the below pictures.

Play around with the vertical keystone correction, and horizontal if you have it, until the image projected is a clean rectangle. Then, you’re ready to move on to the next step of fitting to your screen.

Once you have the angle adjusted and keystone corrected, your ular image may still overlap with the edges of the screen, or it may not fill it up enough. So, find the zoom function on your projector and dial it up or down so that the image fits the screen horizontally. It’s probably still going to be too high, or too low, but for the last finishing step, keep reading to the next section.

How to Straighten Projector Image: Iteration

You’ve done a lot of work up to now, setting the angle, keystone correcting, and maybe even moving the projector to address any placement issues. Now you’ve discovered that the zoom feature has revealed that your projector is either too far away or too close up, to fit the screen perfectly.

The last step, straightening the projector image once and for all, is a bit of a misnomer. What it really means is to repeat everything above but in smaller increments this time. If you adjusted the angle, and then the keystone correction produced a rectangle that seems to sit crooked, you probably need to adjust the angle again now. If zooming in to fit the screen left the image above or below the screen vertically, then you may need to raise or lower the projector and aim it a bit higher or lower to line up with the screen. But, guess what, that’s going to shift the keystone projection a little, so it’ll have to be revisited. But don’t get discouraged: if you keep at it, and focus on one thing at a time, you’ll be ready to kick back in front of a truly massive screen in no time.