They are very useful for placing the speakers out of direct sight and behind the screen. Voices and other sounds have the effect of coming from the picture itself, rather than from the sides and below the projector screen.

Pros and Cons of an Acoustically Transparent Screen

Reasons to Use an Acoustically Transparent Screen

Keep in mind, if you don’t plan on putting speakers behind the projector screen, then there really isn’t any reason to use an acoustically transparent screen over a standard projector screen. It’s going to cost you more money with almost no added benefits.

There are tons of options for both woven and perforated projector screens out on the market. So, make sure you know exactly what you’re looking for before you decide to make a large purchase.

A woven projector screen is made on a loom similar to how textiles are created. This woven effect provides a natural variation in the spacing and patterns on the screen. The pattern of the weave should be at a very precise diagonal angle.

Certain frequencies tend to be absorbed into the screen, but this is fixable by adjusting the eq of the speakers, so don’t worry too much about that.

In general, woven projector screens do a pretty good job of allowing sound to pass through while blocking light from passing through the screen. However, there are a few issues that can occur with woven screens.

A perforated projector screen is made of a very strong material with thousands of very small perforated holes in it. (Perforated means to pierce and make a hole or holes in). Essentially there’s a ridiculous amount of holes poked in the material which allows sound to pass through the screen.

The material is typically made of a very strong PVC with holes that are usually less than .3mm in diameter. You are less likely to experience the double image effect with a perforated screen because the light does not pass through the screen very well.

What is the Moiré Effect?

The moiré effect occurs when the pixel patterns of the projected image align precisely with the natural pattern of the projector screen. What occurs is a line or lines that run the length of the screen. These lines are very distracting and difficult on the eyes.

How to Avoid the Moiré Effect on Acoustically Transparent Projector Screens

You can avoid the moiré effect on acoustically transparent screens by using a high-quality and smooth projector screen. Most of the newer AT screens on the market are what they call “4K” ready and should not have many issues with 4K or 1080p projectors. It’s best to look at the quality of both the projector and projector screen before making any decisions.

If the resolutions match up and the build quality of the screen is good, then you should be okay. If you do experience the moiré effect, you can possibly eliminate it by adjusting the zoom/focus of the projector.

This can misalign the pixel line and texture pattern enough to fix the issue. Check out our article on how to adjust the image of a projector, this will be extremely helpful if you happen to experience the moiré effect.

Choosing the Best Acoustically Transparent Projector Screen for Your Setup

There are many different brands of acoustically transparent projector screens out there and choosing one can be a difficult task, especially so if you’re confused about whether you need a special one for your 3D projector (by the way, you don’t – we’ve explained why).

Should you choose a woven or perforated screen? What ratio should the projector screen be? What size screen should you get? How much gain should the screen have? These are some of the most common questions when picking a projector screen, and below I will do my best to answer them.

Both of the linked screens are highly reviewed and come with easily assembled frames that even a complete beginner should be able to handle.

Should You Use Woven or Perforated Projector Screen?

After reading the descriptions and issues about both types of screens, you may be wondering, which should I use? Woven or Perforated? In my opinion, a woven acoustically transparent screen is the best option at this time.

Woven screens are much cheaper than perforated screens and still account for an amazing viewing experience. There may be a little more work involved to get rid of double imaging effect. But most of the woven screens on the market include a built-in black background.

This fabric absorbs the extra light reflecting off of the wall behind the screen. The speakers will also perform better behind a woven screen when compared to a perforated screen at the same price point.

This will hinder the viewing experience and may cause all sorts of issues. Almost all non-commercial projectors have a native aspect ratio of 16:9. But make sure you know your projectors ratio before purchasing any projector screen!

Choosing a screen size is very dependant upon the size of the room it will be located in. The size projector screen you can use is also determined by your projector.

To calculate the widest screen size possible, take the distance from the projector placement to the screen divided by the throw ratio.

If this is the case, then your measurements will need to be very precise. Check out our helpful article on short throw projectors and using the throw ratio to calculate screen size and projector placement.

As long as your projector has around 1500+ lumens, then you should be perfectly fine with a gain of 1 – 1.2, as long as there isn’t a ton of light entering the room. Gain really isn’t that big of a deal as long as the projector can produce plenty of light. 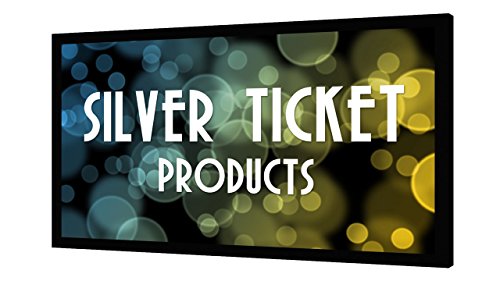 My top recommendation for an acoustically transparent screen is the Fixed Frame Screen with a Woven Acoustic Material (Amazon) by Silver Ticket Products.

This is an outstanding quality product for the price tag! It comes with a full 6-piece fixed frameset that includes all parts and materials needed with easy assembly instructions.

The frame uses a 3 and 1/4 inch black velvet wrapped frame to absorb any overhanging light from the projector. A black border makes the image look much crisper and adds contrast to the image itself.

It’s available from 92 inches all the way up to 150 inches. The frame uses two adjustable vertical support beams which allow you to move them out of the direct line of the speakers behind the projector screen.

It’s essential to not block any of the beautiful sounds being produced by the speakers behind a projector screen. The acoustical transparency of the screen is great and allows sound through with very little to no sound reduction.

This kit even comes with a black backing to reduce any double imaging effect that may occur. The cloth is acoustically transparent as well and can be attached directly to the back of the screen if necessary.

There are also 4 mounting brackets to securely attach the frame to the wall. I highly recommend this product for anyone that is looking for an acoustically transparent screen, is not extremely handy, and doesn’t have a massive budget.

DIY Acoustically Transparent Screen: How to Build Your Own

If you are a true DIYer, then you may want to build your own screen! This is a perfectly fine and viable option, just know, it is a long and tedious process to do this correctly. And you will need to have quite a bit of handiness to accomplish this task.

Here are some simple instructions for building your own acoustically transparent projector screen. This should be doable with a budget of less than $200, as long as you have all of the tools necessary.

I wouldn’t recommend building your own frame unless you really know what you are doing. There are many complications with it and it’s very difficult. But if you love projects like this, then, by all means, go for it!

In all, using an acoustically transparent projector screen is a great way to completely transform the home theater experience. The ability to place speakers behind the projector screen provides an immersive experience to the viewer.

Are there any perf ascreens with a gain lower than 1 or perf screens that reduce ambient light - rather than sitting in a dark room?

What if I’m using an UST projector (just bought the Samsung Premier) — are there acoustic options for this type of projector?

Great article! Can woven or perforated screens be used in an automatic drop down screen? Our viewing angle is going to be from the side unless we angle the screen so a drop down is our only option.

You could do tower speakers behind a screen, but it will probably be a lot more difficult to do. You'd have to have the projector screen off of the wall or find a way to get the large tower speakers inside of the wall.